A Picture Paints a Thousand Words

The Mystery of the Shrinking House (1972) is numbered eighteen in a prolific series of juvenile mystery-and adventure stories about a "trio of lads," who refer to themselves as The Three Investigators, which was written by the late Dennis Lynds – a decorated crime-writer and pen-for-hire who operated for this series under the num-de-plume of "William Arden."

Arden entered a surprisingly cerebral and complex tale into this series, which employed such traditional plot-devices as a hidden object puzzle, a locked room mystery and even a dying message! 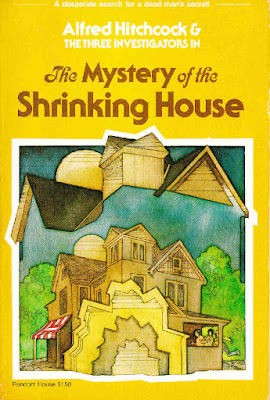 The story begins when Jupiter "Jupe" Jones, Pete Crenshaw and Bob Andrews accompany Uncle Titus, of the Jones Salvage Yard, on a business related trip to the old, largely empty home of Professor Carswell in Remuda Canyon on the outskirts of Rocky Beach, California. Professor Carswell rented out the old caretaker's cottage to make ends meet, but the last tenant, Joshua Cameron, suddenly passed away and never fully settled the bill. So the professor hopes to recuperate a few dollars by selling Cameron's meager, earthly possessions to Uncle Titus.

What they find is a collection of trifling, nickel-and-dime items such as an old-fashioned dress suit, paint supplies, a stuffed owl, a small statue of Venus and a pile of twenty canvases – all of them depicting the cottage from various distances and this gives the illusion of a shrinking house. Or is it really shrinking? In any case, it is the work of an amateur and as worthless as most of the stuff the reclusive artist left behind, but Jupe, Pete and Bob quickly come to the conclusion that "everyone is interest in him" now "that he's dead." After all, they witnessed a shadowy figure fleeing from the home of the professor and tried to chase it, but, pretty soon, they find themselves a client who has a personal tie to the poor man's legacy of the dead artist.

One afternoon, the Jones Salvage Yard receives an important visitor: a Countess and her debonair-looking estate manager, Mr. Armand Marechal. She identifies herself as the sister of the dead painter and wishes to buy back the personal belongings of her brother, but the boys discover that most of his stuff has already been resold – even the pile of canvases. So the Countess and Mr. Marechal task the trio of young sleuths to help them find all of the buyers, which they first attempt to do with something they call a Ghost-to-Ghost Hookup.

The Ghost-to-Ghost Hookup is a system in which each of the boys call five (outside) friends and ask them to keep their eyes peeled for something or someone, but not before each of them called five of their friends with the same request – which could, potentially, mobilize every kid in Rocky Beach and some as far as Los Angeles. In theory, it's pretty similar to the way in which Sherlock Holmes employed his Baker Street Irregulars (e.g. The Sign of Four, 1890), but, as can be seen in this book, the system is prone to error and liable to attract unwanted attention. 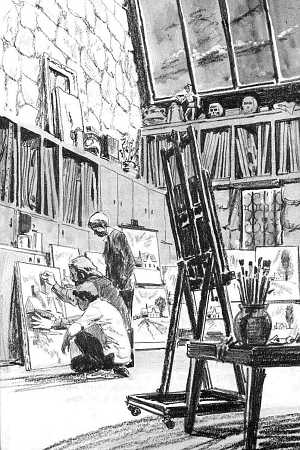 First of all, a misunderstanding in the message that was send out resulted in the yard being swarmed with children, but a misunderstanding in the communiqué they send out swarmed the salvage yard with children. It also caught the attention of two dubious characters: the first one is their long-time nemesis, "Skinny" Norris, who appears to be in possession of one of old Joshua Cameron's last works and wants to know what all the fuzz is about. The second person is a compatriot of mine, Mr. De Groot, who introduces himself as an art dealer from the Netherlands and shows a great deal of interest in the paintings, but he evidently has an ulterior motive as he places Jupe, Pete and Bob in some very tight spots – consisting of an escape from a hotel room and a flight from a subterranean tunnel.

Regardless of these obligatory spots of danger, the primary interest of the book lays in the intellectual challenges facing the teenagers. The first of these challenges consist of identifying what Joshua Cameron possessed that was so valuable to everyone and finding the place where he has hidden this coveted treasure, which directly ties-in to the angle of the dying message. On his deathbed, Cameron rambled deliriously about "zig when zag" and "wrong to zigzag," which proofs to be the key to a large chunk of the mystery. But there's also a locked room mystery introduced at the halfway mark of the story.

Over the course of their investigation, Jupe, Pete and Bob come across a local artist, Mr. Maxwell James, who has a peculiar problem of his own: an apparently haunted studio!

During the last few days, James found, upon his return to his studio in the morning, that "paintings had moved during the night" and "other objects were out of place," but there's only one problem: at night the studio resembles an impenetrable fortress. The studio is "a stone building" with "heavily barred windows and a massive iron door," which is equipped with a modern, burglar-proof lock – one that takes "an expert an hour to pick" and "there are no marks on it." The skylight did not open and the floor itself was of solid stone. Shortly put, the place is "a simple, solid, fortress-like room" with a single door as an entrance and exit. So how's it possible things got moved around in a locked studio?

Well, in order to find an answer to this seemingly impossible question, one of them, namely Pete, stays behind in the studio, hidden away in a supply closet, while the others lay in wake outside of the building. And this makes for a very interesting scene for more than one reason. Pete is crammed inside the small, hot and stuffy cupboard and he realizes, too late, that the heat is filling his cubbyhole with fumes from the cans of paint thinners and solvents – which made his head feel very light and he could not stop himself from dozing off. When he regained consciousness, he was not even sure whether he was actually awake or still asleep. It was as if "his mind seemed to swim in a thick haze" and the intruder appeared to him as an eerie, floating shape in a moonlit glow. Like an actual ghost.

So, yeah, I guess you can say Pete was unintentionally enjoying one of the recreational sub-cultures of the 1970s.

Anyway, the explanation for the mystery of the movement in the locked studio is fairly easy, but, combined with the other plot-threads, it was pretty satisfying and added to the overall quality of the novel.

The Mystery of the Shrinking House provides a surprisingly rich and intricate tapestry of plot-threads, which range from the (hidden) secret of the dead painter and his cryptic last words to the driving motive of all the characters and a small locked room problem as the cherry on top – which results in a really involved and complicated plot. Once again, I was pleasantly surprise to find such a plot in a series of detective stories targeting younger readers. One of the three best I have read from this series thus far!

On a final, semi-related note: as a huge fan of Detective Conan, I found this page with illustrations from the Japanese editions of The Three Investigators to be both interesting and funny. The ones from The Mystery of the Fiery Eyes (1967) makes it look as if the series was a combination of Detective Conan and The Kindaichi Case Files.