A Prevision of Evil

"...it was a dead face. There was a tap, tap, tap on the window. And then I saw a face, a dead face, ghastly and grinning against the pane. I screamed and screamed... and they said there wasn't anything there!"
- Mrs. Louise Leidner (Agatha Christie's Murder in Mesopotamia, 1936)

Last week, I read and reviewed The Crime at Tattenham Corner (1929), which impressed me favorable enough to warrant an early return to Annie Haynes' novels, but the problem lay in picking one from a hand of promising looking titles – such as The Abbey Court Murder (1923) and The Bungalow Mystery (1923). Fortunately, the comment-section came to the rescue and recommended one that, up until then, had only been hovering in my peripheral. 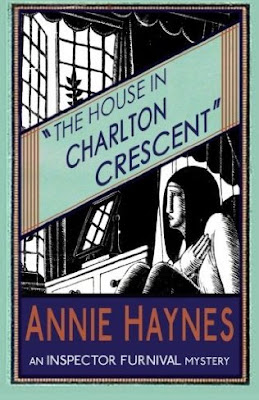 The House in Charlton Crescent (1926) was suggested by Kate, who can be found blogging over at Cross Examining Crime, calling it one of Haynes' stronger mysteries where the puzzle-plot element is concerned. Quality-wise, it can definitely stand up to The Crime at Tattenham Corner. So let's take a look at the second of three books about her first series character, Detective-Inspector Furnival of Scotland Yard, which began with The Abbey Court Murder and ended with The Crow's Inn Tragedy (1927).

Lady Anne Daventry is the main cog in the wheel of the plot of The House in Charlton Crescent and she's known as a difficult, cantankerous old woman, but "life had not been kind to Lady Anne." At a very young age, she lost both of her parents and was betrayed by her first fiancé, which lead to an uneasy marriage to Square Daventry and there were only two points of light in her life – the birth of her two sons. But then the First World War began to rage across Western Europe and they both perished "fighting for England and freedom."

On top of all that, Lady Anne's health began to deteriorate and chronic rheumatism made her home-bound, which turned her into "a distinctly cross and unpleasant old lady." However, the well drawn character-sketch of Lady Anne leaves room for some compassion and sympathy, because you can understand that someone with her back story would become "snappy and irritable" during the twilight years of her life.

If losing her only children and a permanent stiffness of the limbs was not enough to make her crabby and crotchety, she now has a good reason to believe someone has marked her down for extermination!

This unknown person doctored her pills, which her chemist found to contain enough hyoscine "to kill ten women," and poisoned her late-night milk, but Lady Anne wants to prevent a public scandal and engages the services of a private investigation firm – which brings Bruce Cardyn to her home. Cardyn is a junior partner in a respected firm and enters Lady Anne's household under the guise of her new secretary, but even he, as a complete outsider, appears to possess ulterior motives for being there.

On paper, there are more than enough suspects living or hovering about the place in Charlton Crescent: there are two nieces, Maureen and Dorothy Fyvert. The former is a mischievous, troublesome schoolgirl of twelve and the later is a young woman of twenty who was once dragged from a burning building by Cardyn. But now she is, sort of, engaged to John Daventry. He is the nephew of Lady Anne's late husband and succeeded to the estate when his two cousins died during the war. A recent addition to the household is Margaret Balmaine, the granddaughter from Lady Anne's husband’s first marriage, who recently turned up out of nowhere from Australia – which is a nice variation on the time-worn trope of the long-lost uncle from down under. 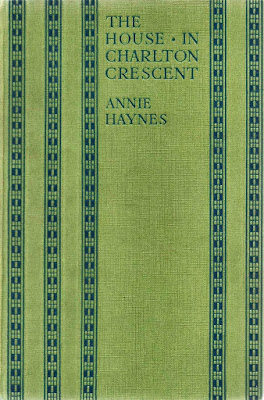 Well, this cast of potential suspects is further augmented by the servants: a loyal butler, named Soames, a pair of maids and the recently fired secretary, David Branksome, who still floats around in the background.

Cardyn took his place in Lady Anne's household, acting as her new secretary, while trying to figure out who tampered with the pill box and how to prevent this from happening again in the future, but he seems to be unable to keep the police out of the house – as a rope of pearls, worth several thousands of pounds, has disappeared from a hidden desk drawer. Detective-Inspector Furnival is called upon to investigate, but a crime of an entirely different nature requires his attention when he arrives at the place.

A large chunk of the household had gathered round the fire in the sitting-room for tea and hot cakes, but this cozy image is disturbed by two events: the first is that of an appearance of "a chalk-white face," outside of the window, "so close to the pane that it seemed to be pressing against it" with "a kind of vague, intangible mist round it." Secondly, one of the people who were present appears to have used this distraction to plunge a dagger in the chest of Lady Anne!

Detective-Inspector Furnival has his work cut-out for him and not only has he to figure out who used this very narrow window of opportunity to commit murder, but also who engineered the appearance of the ghostly face on the outside and this relates to a singular pair of footmarks – which were found in the flower border below the window. But there's also the theft of the pearls to consider and the witness testimony of a shopkeeper who swears it was Lady Anne who offered them up for sale. Or whether the person who wielded the dagger was the same as the person who attempted murder by poison. There are also additional complications when one of the family members goes missing, the secret of Cardyn and whispers of a mysterious Cat Burglar.

All of this makes The House in Charlton Crescent a busy, bubbling and brewing detective story, which has none of the pesky shortcomings that marred some of Hayes' other mystery novels. Such as loose, unexplained plot-threads (Who Killed Charmian Karslake, 1929), convenient, last minute confessions (The Crime at Tattenham Corner) or clues that were withheld or overlooked (The Crystal Beads Murder, 1930). It made for her most soundly plotted detective stories to date.

However, I have to nitpick about one thing: the ghostly face by the window and the manner in which the murder was committed has been compared to Murder in Mesopotamia (1936) and Cards on the Table (1936) by Agatha Christie, but Haynes did not deliver the Christie-like rug-puller of a revelation that the splendid premise deserved. As a matter of fact, the eventual revelation of the murderer's identity and motivation was actually pretty mundane and a bit of a let down, which is why I place The Crime at Tattenham Corner slightly above this (in spite of the convenient, last-minute confession), because it had an overall more original conclusion.

Otherwise, The House on Charlton Crescent is a well-written detective story with good characterization and a pleasantly busy plot, which only lacked that extra pinch of ingenuity that would have elevated the book to a different league.
Geplaatst door TomCat on 7/13/2016