The Story of a Crime

"Oh, listen, just one more thing... it was not a suicide and they've officially assigned me to the case. That's my specialty, you know. Homicide."
- Lt. Columbo (Season 2, Episode 1: Étude to Black, 1972)

Sir Basil Thomson had a varied and storied career in the service of the British government, serving as prison governor, intelligence officer, assistant commissioner of police and assistant premier of Tonga, which gave him a rich background to draw from when he turned to fiction – penning a spate of short stories and early examples of the police procedurals. I've only read one of his short stories and three full-length novels, but they differed as much from one another as their authors various government gigs. 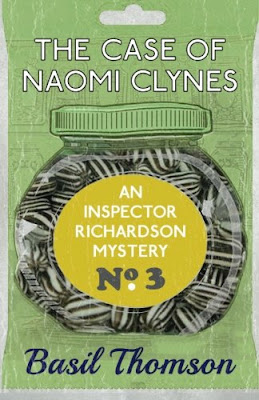 Richardson's First Case (1933) is a literary ancestor of the modern roman policiers and The Milliner's Hat Mystery (1937) is an adventurous police-thriller with components of the chase story and the inverted mystery, in which policemen from two countries are crossing swords with the members of an international gang of dope peddlers. The third book from Thomson's series of police novels, The Case of Naomi Clynes (1934), conforms to this pattern of variation in both plotting and storytelling.

In his third outing, Thomson tried his hands at a genuine detective story and even has Richardson working in tandem with an amateur or two. But more on them later.

The Case of Naomi Clynes begins when a charwoman tries to enter an apartment, located above a milk shop, but she's immediately repelled by the gas fumes that has filled the rooms: the tenant of the room, Miss Noami Clynes, is found on the floor of the kitchen with her head in the gas-oven – all of the taps turned on. A typewritten note is found explaining she has come "to believe that life is not worth living" and "that it is no crime to put an end to it," but Malcolm Richardson, recently promoted to the rang of inspector, uncovers evidence that tells a different story.

Richardson learns that Miss Clynes was "a budding authoress," a mystery writer to be precise, who had succeeded in finding a publisher and they had accepted her first novel on very liberal terms, which is not exactly a reason to crawl into a gas-oven. On the contrary!

There is also a ton of physical evidence uncovered indicating the presence of an unknown person in the apartment at the time Miss Clynes allegedly took her own life: a gold-tipped cigarette is found near the fridge and cigarette-ash is found in the living room, but Miss Clynes was described as an anti-smoker – which she viewed as a dirty, messy habit for a woman to indulge in. In addition to that, Richardson plucked a strand of green wool that was stuck beneath a tack in the floor used to hold down the cork carpeting, which came from the back of the victim's dress and suggest she was dragged from the sitting-room into the kitchen. Throw in a coffee cup containing traces of poison and you’ve got yourself a murder case. 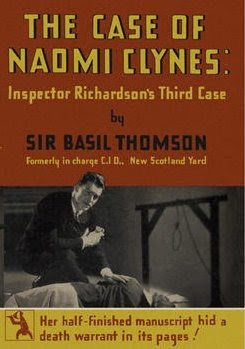 The first half of the investigation is very reminiscent of the police procedural-style from Richardson’s First Case, in which Thomson gives more consideration to the proper and legal procedures of a police investigation than can be found in series of the time with a police inspector at the helm – e.g. Michael Innes' Inspector John Appleby and Ngaio Marsh's Inspector Roderick Alleyn. This investigation encompasses information that needs to be pried from some of the other tenants and delving into the past of the victim, which lays bare a trail leading straight to France and that's where the story really begins to get interesting.

In fact, there are a number of plot-threads stretching across the channel, but, in order to follow up on them, Richardson accepts the help of an old friend of the C.I.D. James Milson is a publisher of mystery and thriller novels, but he used to lend his remarkable brain to Scotland Yard "whenever they’re really up against it" and his firm was accepted Miss Clynes first book. So he feels compelled to help the police in bringing her murderer to justice and travels to France to get information from one of her former employers. However, this would not be his last trip across the channel.

Richardson takes a busman's holiday to France and is not only accompanied by James Milson, but the uncle of the latter, James Hudson, joins them and he turned out to be a fun character. Hudson is an American steel magnate from Pittsburgh and has a character "prone to exercise dictatorial powers," but he has a softer side and the ending shows a heart of gold was beating beneath his well-tailored clothes. Hudson has a nice, but short exchange, with Richardson about the differences between the political machines and judicial systems of the United States and England, which touches upon immigration, court systems, crime-rackets and State Rights.

What they find in France is that the murder back in London has a very unusual origin, which turns the final quarter of the book into, what Bill Pronzini calls, humanist crime-fiction and gave the book a strange, but warm, ending. I found the crime at the heart of the murder to be very original. That added to the overall effect of the revelation. I wish I could tell more about the nature of this original crime, but I would only be spoiling a good read for you.

It’s noted in the introduction of the book that "intricacy of plotting,' as judged by the standards of Agatha Christie and John Dickson Carr, "was not Thomson's true specialty," which is true, but I thought The Case of Naomi Clynes excelled in its beautiful simplicity – which becomes very clear during the final leg of the story. On top of that, there are some very original touches to the explanation.

So, I would recommend starting with The Case of Naomi Clynes, if you have not yet sampled this series for yourself. It's by leaps and bound the best one thus far and the other entries from this series will have a hard time matching it.
Geplaatst door TomCat on 7/19/2016