"Give a man enough rope and he'll hang himself."
- American proverb

Last month, I reviewed a Gothic-style mystery novel, called Venom House (1952), which received a glowing notice from my side and concluded that blog-post with a promise to return to Arthur W. Upfield's crime-fiction more often. So here we're again!

Bony and the Mouse (1959) has an alluring sounding, alternative book-title, namely Journey to the Hangman, but the original one fits the plot better. The book is a late entry in the Detective-Inspector Napoleon "Bony" Bonaparte series, but follows a familiar pattern of the series: a terrible crime has been committed in a far-flung corner of the Australian continent and the passage of time deadened the trail – at which point the authorities assign the cold-case to Bony. 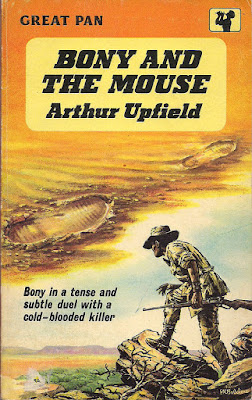 Bony is a blue-eyed, brown-complexioned man of mixed heritage, a "half-caste," who can be accurately described as a relentless, but patient, man hunter in a three-piece suit with a police badge. He can stake out a spot for weeks, follow any trail across miles of desert land or dense bushes and find a body by observing the behavior of scavengers. Simply put, he is the ideal investigator to break open a cold, dead-end investigation. You can find aspects of all of these elements in Bony and the Mouse, which was written and published on the tail-end of the genre's Golden Era.

The backdrop of the story is a small, fictional mining town, called Daybreak, which Upfield placed in the Western part of Australia. But the place is best known as the land of Melody Sam.

Daybreak is a one-pub town and the place is founded, owned and ran by an old-time prospector, Melody Sam. He financed and built the general store, church and even a school of arts, but was prevented, by the authorities, to do the same for the police station and post-office – preventing him from completely dominating the town. Well, on paper, anyway.

Even so, Melody Sam turns out to be a rather sympathetic, if a somewhat eccentric, character who means well and his personality plays nicely off Bony. Particularly towards the end of the story. As the town patriarch, he took care of the town and it was as peaceful a place as one can expect from such an outpost, but then the murders happened.

The first victim was an aborigine girl, named Mary, who was employed by the parson and his wife as a maid, but, one night, she was lured from the house and had her head clubbed in – which was, initially, written off as a tribal killing. Then a second inhabitant of Daybreak was brutally murdered: the wife of a cattleman, Mrs. Lorelli, was chocked to death in the kitchen of her homestead. Finally, a young lad who worked at the local garage got a knife across his windpipe near the mine. Your name does not have to be Sherlock Holmes to observe that "there was no pattern in method," but the murderer left an abundance of footprints that apparently belonged to a person with "a slight limp in the right leg."

A youthful delinquent, Tony Carr, seems an obvious suspect, but the local police is unable to bring any direct evidence home to the young boy and he has some people within the town who are on his side – closing the book on the murders as fast as they had began. And thus the trail began to grow cold. So the Australian police apparatus dispatched Bony to the small town and he assumed the identity of an itinerant horse-breaker, Nat Bonnar.

As Nat the horse-breaker, Bony takes approaches the problem from several different angles. One of the town's people, Sister Jenks from the hospital, recognized him as Detective-Inspector Napoleon Bonaparte and he employs her as "the magnifying glass" to examine both the victims and "all others living in and about Daybreak" – as well as interacting with the locals as a newly arrived yardman. He's also given an opportunity to display some rudimentary tracking skills when inspecting a fresh track of footprints, but, mostly, he has to confine himself to playing the part of the patient cat who lays in wait for a fidgety mouse.

One of the latter chapters, titled "Bony Smells a Mouse," gives an exposition of the psychology of the patient cat and the fidgety mouse, which illustrates the relationship between the undercover police-inspector and the hidden killer. After the cat "sniffs at the hole," assuring there's a mouse within, he "settles in a coma of patience," but the mouse, "being a natural fidget," cannot stay inactive for very long – and he must adventure. Every time, the mouse ventures further out of his hole and this will eventually prove fatal for the pip-squeak.

There is, however, one downside to this method of patience: a fourth murder is nearly impossible to prevent, but it shows there's truth in the old adage that if you give a man enough rope he'll hang himself. And the illustration of the cat and mouse proved prophetic for the capture of the murderer, which is done in a great scene spread across the final chapters. It shows that Upfield really knew how to write a yarn.

However, I have one single complaint about the plot of Bony and the Mouse: the motivation that fueled the murders was not very original and Upfield was not even the first mystery writer to refurbish this plot-idea by 1959, which was slightly disappointing. I suspected such a game was being played, but I was hoping Upfield would pull-off a different kind of solution. Regardless, Bony and the Mouse was still a very readable detective story with lots of great characters, atmosphere, some unusual detective work and lots of vivid local color – which truly never fails to impress me in this series. Obviously, the English-born Upfield loved his adopted homeland and setting has always been one of his strong suits.