"One reader's literature is another reader's garbage can liner... whether it is literature or not is something that will be decided by the ages, not by me and not by a pack of critics around the globe."
- Elizabeth George

Arthur W. Upfield was an Englishman transplanted to Australia and exploring the outback as a Jack-of-all-trades provided him with an opportunity to accumulate a vast wealth of knowledge, experience and understanding about his adopted homeland – which served him well when he finally settled down behind a typewriter. However, the aim of his literary ambitions reached far beyond a volume of reflections on his Australian experiences.

Upfield was far above mere literature and pursued one of the noblest ambitions of man: to craft and forge great, imperishable detective stories that'll be with us long after their creators became dust. This was a task that lasted for several decades, from the late 1920s to the early 1960s, which saw the publications of twenty-nine novels about Detective-Inspector Napoleon "Bony" Bonaparte of the Queensland Police. 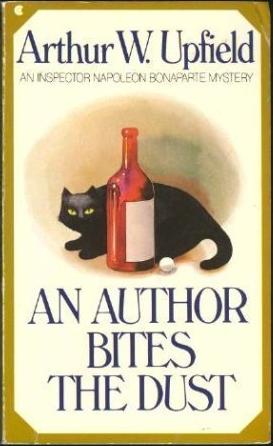 The Barrekee Mystery (1929) introduced and added a detective to the genre who was truly unique in every single aspect of his character. Bony is of mixed race, a "half-caste," who drew on both his white and aborigine heritage to ascend the ranks of the police force. A tracker and hunter in a suit who can stake out a desolate location for weeks, track across endless, sun-blasted planes and dust choked flatlands or hunt down anyone who sought refuge from the law in the dense bushes of the Australian outback – giving this series a distinct and unique character of its own. But, sometimes, Upfield confronted his creation with, what could be labeled, as a domesticated murder case.

An Author Bites the Dust (1948) is the 11th entry in the series and takes place in the fictitious town of Yarrabo, situated in the valley of the real Yarra River, where two of the ringleaders of the Australian literati have settled down. Mervyn Blake is a novelist, critic and president of the Australian Society of Creative Writers, but, above everything else, he's a snob with a bloated opinion about the importance of his own contribution to the field of Australian literature. His wife, Janet, only published several short stories and some verses, but she is right beside her husband as they organize weekend parties for a small coterie of back-slapping authors/critics – who go through great pains to differentiate "between literature and commercial fiction."

As to be expected, they fancied themselves to be the pedestal the first column was erected on, but the Australian public response was, "if this was literature," they "would have nothing to do with it." Hear, hear!

You'll get a glimpse of the nature of these people when the reader is allowed, briefly, to be a silent observer at one of their gathering. There's a haughty response to detective-and commercial fiction when, while "discussing the novel and novelists," someone accidentally mentioned "the atrocious efforts of a 'whodunit' writer," because their sole interest is Australian literature and the influence their small clique "may exert upon its development." It is also stated "there was never yet a best-seller that had any claims to being good literature" and with literature they meant the kind that is "understood by the cultured." Thankfully, the end of that particular chapter reports to the reader the unexpected and inexplicable passing of Mervyn Blake.

Blake is found on the floor of his writing room, clawing the closed door, but the local authorities are unable to determine how he had died and the result is an open verdict, which leads the case to grow cold over the stretch of several months. Until, that is, Superintendent Bolt puts Bony on the case, because he did not want the case to become stone cold and believed the peculiar circumstances would interest him – which it did.

So Bony becomes a paid lodger of the next-door neighbor of the Blakes, Miss Pinkney, who shares her home with the memories of her dearly departed brother and an enormous all-black cat. The animal listens to the name Mr. Pickwick and is fond of playing with an old, gnawed ping-pong ball, which will eventually provide Bony with an important clue that puts him on the path towards the solution.

In spite of the months that have passed and the scattered group of suspects, An Author Bites the Dust can still be classified as a traditional mystery with a closed-circle of suspects. Considering the characteristics and profession of the victim, as well as that of his potential murderers, I got the impression Upfield purposely lifted Bony from his preferred surroundings in order to explore a traditionally plotted murder in a domestic surrounding – because he reportedly really hated those kind of critics and some of them were apparently modeled on real-life examples. The story also impressed me as an unabashed homage to his fellow mystery writers and everyone who attempted to write exciting stories. Upfield mentioned Joseph Conrad, John Buchan and S.S. van Dine, but there's also a character in the book, a mystery writer by the name of Clarence B. Bagshott, who impressed me as the Ariadne Oliver to Upfield's Agatha Christie.

Now that I’ve mentioned Christie, the story and plot seems like a conscious imitation of one of the British Crime Queen: there's a very bizarre, but original, poison used that you would expect to find an Edgar Allan Poe story, but a Van Dinean footnote assured the reader the substance was not an unknown poison as it was authenticated by Prof. Alfred Swaine Taylor – which can be looked up in a dusty old book titled The Principles and Practices of Medical Jurisprudence (1873). There's the depiction of Miss Pinkney, which is one of the kindest and warmest I have seen of a spinster in mystery fiction, but also the type of character you'd expect to find in Crime Queen novel.

But the most attractive aspect of the book is Upfield giving a well-crafted finger to the no fun having literary crowd who look down their nose at, what they call in Australia, commercial fiction.

So, An Author Bites the Dust was a bit different from the books that initially lured me to the series, such as Death of a Lake (1954), Cake in the Hate Box (1954) and Man of Two Tribes (1956), but, as is obvious from this review, I enjoyed this little sidetrack in the series. And I think it's safe to say that I share some opinions with Upfield on what's good fiction. Even though I still haven't read Buchan's The Thirty-Nine Steps (1915), which I have remedy one of these days.
Geplaatst door TomCat on 2/29/2016