A Sentence of Death

"But suppose, as in the old story about the man who played cards on an ocean liner with the devil, her adversary should choose to lead out the green ace of Hippogriffs?"
- Miss Hildegarde Withers (Stuart Palmer's Miss Withers Regrets, 1947)

The terms "Golden Age Detectives" and "Classic Mysteries" are inextricably linked to the British Isles, but, over the years, I have cultivated a strong affinity for their American contemporaries – which includes such luminaries as Ellery Queen, Kelley Roos, Clyde B. Clason, Helen McCloy, Craig Rice and Rex Stout. One of my personal favorites from this place and period in time is the funny and clever Stuart Palmer. 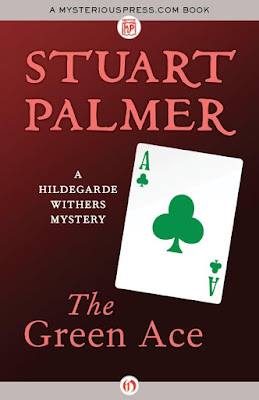 Stuart Palmer was a screenwriter and novelist who wrote a host of mysteries. A lion's share of them featured that "meddlesome old battleaxe," Miss Hildegarde Withers, who made her first appearance in The Penguin Pool Murder (1931) – followed by thirteen additional novels and a handful of short collections. Some of my favorites from in this series are The Puzzle of the Pepper Tree (1934), Nipped in the Bud (1952) and Hildegarde Withers: Uncollected Riddles (2002), but, inexplicably, I had not returned to this series for many years. A situation that could no longer stand!

So I picked up a copy of The Green Ace (1950). It's one of the last books in the series, only four more would follow over a period of twenty years, and has a plot modeled around a race-against-the-clock type gimmick.

On an early, barmy Saturday morning, two police officers witness how a speeding car ignores a stop-signal and smashes into a parked delivery truck. Routinely, a ticket, an accident report and a stern warning would've been enough to delegate this incident to the dustbin of history, but one of the officers notices that "there was something crammed against the back seat" covered with "an old army blanket" – which obscured the naked body of dead woman. The driver of the car, Andrew "Andy" Rowan, is "a former hack newspaperman turned press-agent" and the "big glamazon" of a body, Midge Harrington, was his client and an aspiring Miss America.

Rowan is held responsible for her murder and was unable to convince the authorities of his innocence. As a consequence, he’s tried, convicted and scheduled for execution within a year of his arrest. However, this was only the prelude of the story. A story that begins when Rowan is in the death-house and the clock begins to tick away the final days of his life.

Somehow, the condemned man "managed to hang onto $3500" and drafted a will, in which he left the three-and-a-half grand to Inspector Oscar Piper. There is, of course, a catch: Piper has to use the money "to make a full and impartial investigation of the murder for which he is being unjustly executed." Inspector Piper is wary that the press will get wind of this "screwball will," but his old friend, Miss Hildegarde Withers, reminds him there's time left before Rowan "walks that long last mile through the little green door to the hot-sit" and does what she does best – sticking her nose where it has no business of being.

Quickly, it becomes apparent what sets the ex-school teacher apart from other amateur detectives: Hildegarde Withers is not content with merely woolgathering or observing from an armchair. Withers prefers to actively pursue the truth, which has varying degrees of success and her actions often drive the plot itself forward. Her actions also tend to lend a comedic touch to the stories. For example, The Green Ace has her unsuccessfully impersonating the condemned man's wife and is arrested for shoplifting, but her shenanigans during an attempted identifications of a suspect with an "extremely prominent nose" put a strain on the friendship between her and Piper. So it's not all fun and games. 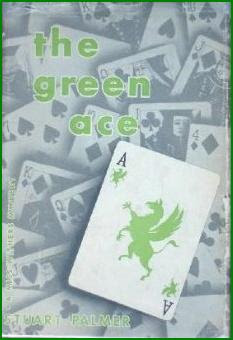 However, besides stumbling from one situation into another, making "a shot in the dark" and "play hunches," Withers is an ardent Sherlockian. She learned from the greatest of all detectives and applied his methods, of which the most successful one is a network of grownup-counterparts of the Bakerstreet Irregulars. As an ex-school teacher, "generations of grubby urchins had passed through her tutelage" and "had risen to positions of importance and influence," which she could call up on "just as Sherlock Holmes did on his Irregulars."

Well, it's this combination of delightfully busy leg-work and recognizable Sherlockian wisdome ("the curious incident of the lipstick in the nighttime") that leads Withers to the logical explanation of a case that involves a deadly necklace, mysterious phone calls, hysterical laughter and a murdered medium – who was brained with her crystal ball. The most impressive aspect of the plot was how the reader's attention was diverted away from the obvious suspect and how a clichéd-ending was avoided. A gross miscarriage of justice was avoided, but not in the way you'd probably expect.

So Palmer managed to do something original this plot-device and therefore warrants a read, but, if you're new to the series, I would recommend getting acquainted with characters first in their previous outings.

On a final note, I have to point out how of a 1950s novel The Green Ace is, which includes a number of references to the dawning "days of television." Notably, there's a description of the apprehension of a suspect, as "newsreel cameras whirred” and "a man with a portable microphone ran forward," but "say something for the television audience" was met with a response that turned Channel Four "dark all over the nation" – not soon enough "to prevent the kiddies from learning some new words." There are also references to the H-Bomb, flying saucers and "under-the-counter Billie Holiday numbers." I found it interesting how these (now historical) references hinted at the changes in pop-culture and it's only natural that Palmer, as a writer for Hollywood, was aware of them and they found their way into his work.

Well, that was it for this review and now comes the excruciating process of deciding what to devour next. A locked room mystery? The Three Investigators? Something hardboiled? A historical detective? Maybe finally wrote that blog-post about what makes a good impossible crime? Choices, choices, choices!
Geplaatst door TomCat on 2/10/2016