"This is a house of evil—of evil, I tell you!"
- Hannah (Agatha Christie's "The House of Lurking Death," from Partners in Crime, 1929)

Back in February, I reviewed An Author Bites the Dust (1948) by Arthur W. Upfield, in which he transplanted his series character, Detective-Inspector Napoleon "Bony" Bonaparte, from Australia's dense bushes and sun-blasted plains to a small, picturesque valley town – where a pretentious, snobby novelist and literary critic had bitten the dust.

One of the draws of the series is tailing Bony, as he tracks across stretches of dessert or cuts a way through a sweltering green hell, but regardless, the book worked surprisingly well as a quiet, domicile detective novel. In many ways, the book reads a warm, loving homage to the mystery writers from Upfield's time. He would resort back to this traditionalists approach for the writing of Venom House (1952), but this time the earmarks of his descriptive outback-fiction left their mark on both the writing and the plot. 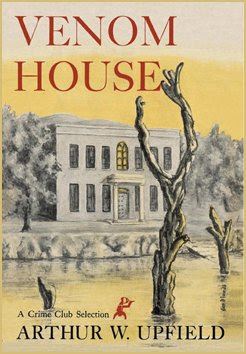 In his review of the book, Curt Evans described Venom House as "a throwback to the Victorian sensation novel" or "the Gothic tale," which is a fair description for a story about a decaying mansion, a cursed family and even a mad relative, but the book is much more than a mere nostalgia act – as it did more than just play a familiar tune on those Victorian-era tropes. So it's not entirely harkening back to the days of the Victorian and Gothic tales of crime and horror, such as was the case with The Third Victim (1941) by J. Jefferson Farjeon, but stands comparison with John Dickson Carr's Poison in Jest (1932).

Speaking of Carr, I think he would've probably approved of the setting of the story and the haunted history clinging to the place.

The "wretched history" of the Answerth clan is firmly rooted "in evil times" and "evil has clung to it all way down the years," which began when the first Morris Answerth of the family came down from Brisbane in a covered wagon – collecting "a dozen runaway convicts" and a woman, "he bought with two gallons of rum," along the way. They laid claim to all of the land in the area, but they had to fight over it with the natives. A battle that had been indisputably won by the settlers, but a lot of blood had to be shed to secure the claim to the land. According to local legends, the last of the Aborigines from the region "pointed the bone at them and their descendants," which for many is an explanation as to why misfortune, tragedy and death has stalked the family for generations. It's also the reason why locals refer to the place as Venom House.

A number of family members have committed suicide, were flung off a horse or simply murdered. The erection of the titular house was as costly in human life as it was in material resources, because the builders were flogged or shot when a strike occurred. A river once "snaked over the valley," but "a cyclone or two" and hundreds of tons of dirt chocked the natural outlet to the sea – which flooded the land and created a dreary moat around the house called Answerth's Folly. Dead or dying trees surround the house and swampy waters. It seems like a perfect place to dump a body or two and that's exactly what happened!

Before the story's opening and arrival of Bony, two bodies were pulled from the dark, murky waters of the Folly: the first body belonged to a local butcher, Edward Carlow, who had been forcefully held under water and the other one, elderly Mrs. Answerth, had been strangled to death.

Bony finds a small, close-knit group of people on the artificial island and they make for interesting posse of potential killers. First of all, there are the two sisters, Mary and Janet. As Bony observed, "no two sisters could be more widely apart than these," which is true in both physic and personality: Mary is a large, rude and discourteous Amazon who could take down anyone in a brawl. Janet has more refined and feminine personality, which comes from having enjoyed a first-class education and assumed control over the family after their father passed away. They have to manage their local empire of cattle stations and flocks of sheep, but they're not particular fond of each other and this provided Bony with several angles to the murders. 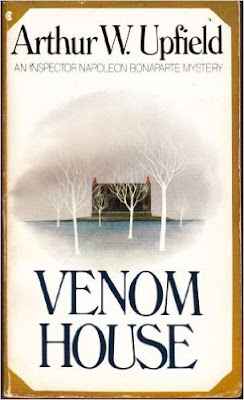 There's also a half-brother, Morris Answerth, who's the son of the dead woman, Mary and Janet's stepmother, but he suffers from arrested development and has the mind of a child. As a result, he spends all of his days locked away in his bedroom and is always dressed as a schoolboy. Usually, these kind of mentally ill or disturbed characters aren't the most convincingly-drawn characters in traditionally-minded detective stories, but I found Morris to be a surprising exception to this rule and his childish manners were often convincingly played up – such as his pathetic childish reaction of wonder and want when sees a pocket light for the very first time. The housekeeper-and cook, Mrs. Leeper, who had been the matron of a large mental hospital, rounds out the household. She has been saving money to buy her own hospital and a perfect character to run the day-to-day routine of that decaying madhouse.

However, my favorite characters from the book were two of the hanger-on's and they had, alas, only minor roles in the story. The first is a bright, young and a somewhat reckless driver, named Mike Falla, who tells to Bony that "a bloke's not a real driver if he has to use brakes." Bony takes him along for one part of his investigation, regarding the theft of bales of wool, which showed why Falla deserved a larger part in the story. He would have been perfect as an Archie Goodwin-type of character to Bony's Nero Wolfe. The second character was an elderly, former stockman, Albert Blaze, who tells Bony about the history of the family and place, but he was basically one of those coarse, rugged and rough-tongued outback characters Upfield was so good at describing.

Bony roams around this slightly grotesque gallery of suspects and mournful surroundings, asking questions and poking around in rooms, which is what one comes to expect of a fictional police officer from this era and gives the plot a far more traditional structure – especially compared to such unorthodox entries in the series such as Man of Two Tribes (1956) and The Valley of Smugglers (1960).

The final chapters is somewhat of a departure from this traditional approach and has Bony sneaking back into the pitch-black home, under the cover of night, where he finds a battle of wits and hatred is fought out in the dark. It's not battle that concludes with pulling the rug from beneath your feet, but one that makes sense and neatly ties up all of the loose ends. You can argue that the solution is almost too neat and clean, but a dark, brooding ending would have left the door open to a sequel, which would have never happened with this series.

So the ending also closed the book on several generations' worth of gruesome deaths and domestic violence, which makes for an excellent read and another top-notch entry in this series. I really love Upfield's writing and should return to his stories more often. In the meantime, you should make an effort to discover these books for yourself.
Geplaatst door TomCat on 6/17/2016