"The career of the locked-room mystery in literature has been nothing short of exemplary."
- Donald A. Yates ("The Locked Room: An Ancient Device of the Story-Teller, But Not Dead Yet," from The Michigan Alumnus Quarterly Review, 1956)

Earlier this week, one of my fellow locked room enthusiasts, JJ, wrote a scathing blog-post about the selection of short stories from a recently published anthology, Classic Locked Room Mysteries (2016), which was edited and compiled by David Stuart Davies – who is primarily known as a writer of Sherlockian fiction and Holmesian studies.

JJ dismissed the collection as both "the laziest anthology of classic crime tales ever assembled" and as a missed opportunity "to bring back into circulation stories that aren't readily and easily available." 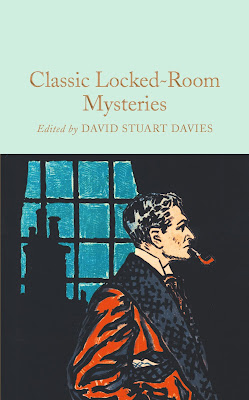 I can only agree with his criticism about the choice of stories: the table of content resembles a well-attended reunion of all of the obvious suspects who regularly turn up in these kinds of anthologies. However, I've never seen them all neatly gathered in a single volume. They're all there! The stories range from Edgar Allan Poe's "The Murders in the Rue Morgue" and Jacques Futrelle's "The Problem of Cell 13" to Melville Davisson Post's "The Doomdorf Mystery" and G.K. Chesterton's "The Invisible Man," but the saddest part is that all but one of the stories are in the public domain and appeared in some fairly recent anthologies – specifically The Mammoth Book of Locked Room Mysteries and Impossible Crimes (2000) and The Black Lizard Big of Locked Room Mysteries (2014). It simply reeks of a quick, easy and cynical cash-grab.

JJ was right when he spoke of a missed opportunity, because a good, historical and interesting collection could've been cobbled together with stories from the public domain, but that would've required a bit of work. There are a ton of locked room yarns from the nineteenth and early twentieth century that were swallowed by the mists of time, which would make for an interesting and even historically important anthology. You only have to crack open and skim through Robert Adey's Locked Room Murders (1991) to find more than enough material for such a collection. So guess what I did?

I arranged an alternative line-up of fifteen titles for Classic Locked Room Mysteries or a hypothetical, non-existent anthology, called Ye Olde Book of Locked Room Conundrums, but I've not read every single story on this list – which were picked because they sounded interesting and were rarely or ever anthologized. And that's kind of the point of this blog-post: pointing out the stories that have been ignored and overlooked by anthologists for decades. I also threw in a handful of familiar names to give this potential collection some star power.

So, without further ado, here is my shot at being an armchair anthologist:

As noted above, I've not read all of these stories myself, but good, bad or dated, I think most of us would love to explore them between the covers of a single collection of short stories. You've to do a bit of digging to find them all, but such a book would still be dirt-cheap to produce. And readers would not feel like they're being ripped off.

So let me know what you think of my compilation and how it compares to Davies' Classic Locked Room Mysteries.
Geplaatst door TomCat on 7/28/2016