"I am bound to tell what I am being told, but not in every case to believe it."
- Herodotus

Edgar Allan Poe's "The Murders in the Rue Morgue," published in Graham's Magazine in 1841, was the first to be recognized as a full-fledged detective story and locked room mystery. However, the idea of a crime perpetrated in a sealed room is even older than that. Case in point: Herodotus of Halicarnassus.

Herodotus was a historian in ancient Greece of the 5th century BC (c. 485-425) and known as "The Father of History," but the tale of "Rhampsinitus and the Thief" also qualifies him as the progenitor of the Locked Room Mystery and Inverted Detective Story! It's believed that Egyptian priests passed on the story to Herodotus as an anecdote, and while the historian questioned the veracity of the account, it was a story too good not to record – and perhaps even embellished it here and there. 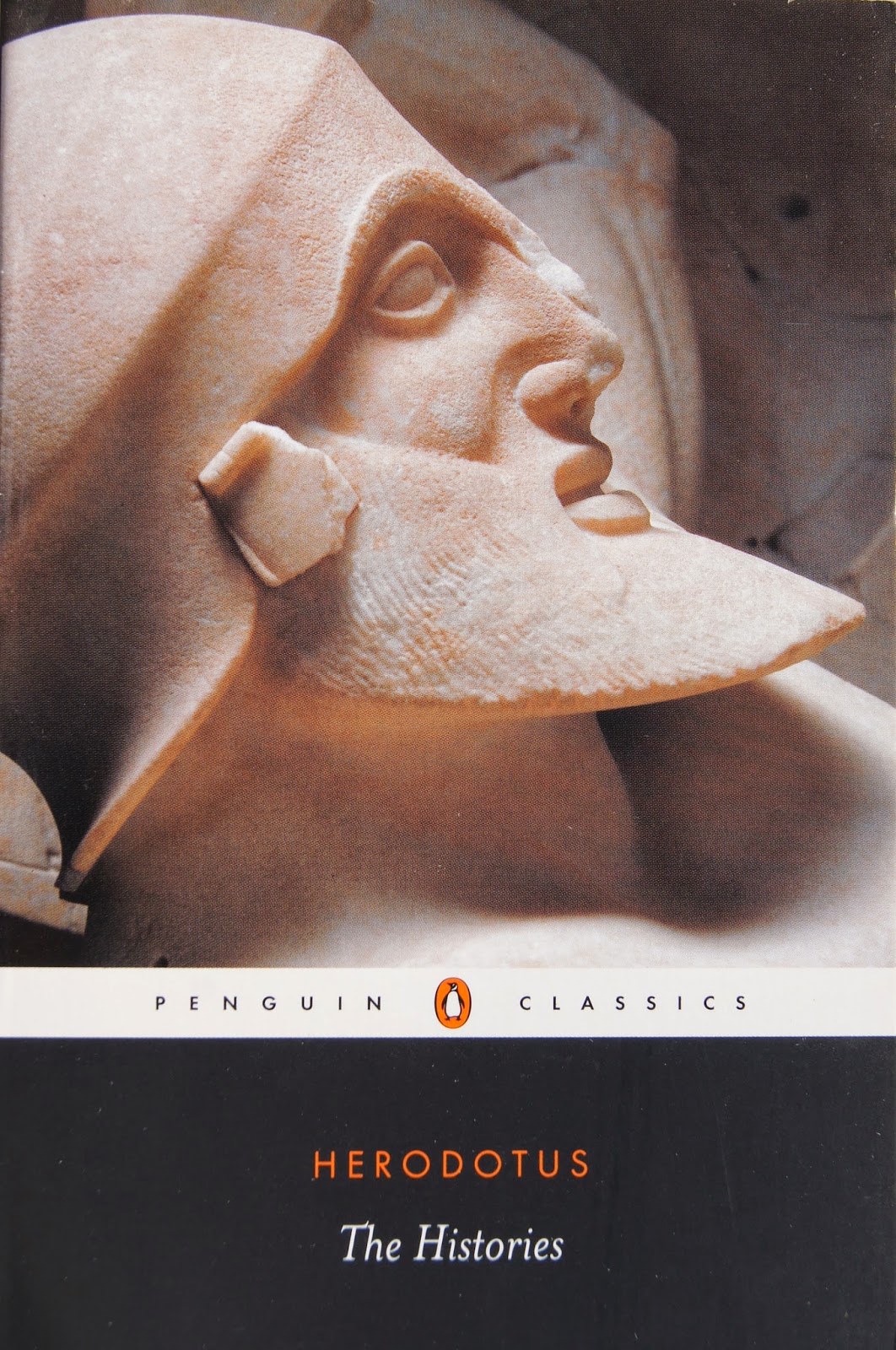 King Rhampsinitus was said to possess an enormous wealth in silver, "which none of the kings born after him could surpass or even come near to," and wanting to protect his personal fortune he ordered to built "a chamber of stone." Unfortunately, for the king, one of the builders "disposed one of the stones in such a manner that it could be taken out easily from the wall," which is how his sons began to plunder to the king's treasure room after their old man passed away. The king is mortified when his wealth begins to diminish and strews the vault with booby traps, but the mystification is complete when they discover "the body of thief held in the trap without his head" and "the chamber unbroken, with no way to come in by or go out."

I can believe there's a core of truth in this portion of the story and that there have been robberies in ancient times by the very men who constructed a strong room or vault, but what follows is pure fiction in the cat-and-mouse tradition. The body of the headless thief is hung upon a wall, and guarded, much to the grief of his mother and the robbers' brother hatches a plan to retrieve the body for burial – which simply consists of plying the guards with drinks. This is, however, not the end of the tale as the king comes up with a plan of his own and his daughter is used to bait the hook. But, as to be expected, the nameless thief again outsmarts the king and eventually wins the princess' hand with the assistance of a severed arm!

On a whole, "Rhampsinitus and the Thief" was an interesting and enjoyable excursion to one of the earliest known locked room mysteries/detective stories, but I began to really appreciate the story after reading "Bel and the Dragon" from the Book of Daniel as comparison material. It's cited as another locked room mystery from antiquity.

The first part of "Bel and the Dragon" has some intriguing ideas that can be found in impossible crime stories from a much, much later vintage: there's a temple dedicated to a god named Bel, in which King Cyrus leaves food and drinks as an offering. Daniel is skeptical and sets out to prove Bel isn't real. A supernatural entity occupying a specific room or place is a popular theme for impossible crime stories, such as Derek Smith's Whistle Up the Devil (1954) and Helen McCloy's Mr. Splitfoot (1968), and sealing the door with a signet echoes how rooms were locked in John Dickson Carr's The Sleeping Sphinx (1947) and Paul Halter's La quatrième porte (The Fourth Door, 1987). I guess the main exception is how footprints are being used as proof of human intervention instead of a supernatural agency.

Unfortunately, the second half is, more or less, what I expected from a biblical story and probably why I prefer Herodotus' anecdote, because the hero had to rely on his wits and brawn throughout the entire story – while Daniel enjoyed divine protection. And that's just plain cheating!

If there's anything to take away from these two stories, it’s a growing conviction that a place such as the library in Alexandria used to store manuscripts that, mystery fans and scholars alike, would respectfully have referred to as "The Ancient Ones." We really need to figure out how to time travel!
Geplaatst door TomCat on 5/17/2014