We aren't even halfway through the year and the Cold War has already occupied a secure spot on the (short) list for "Best Comeback" in 2014, which reminded me of my continuing negligence of Cold War thriller-and mystery novels.

Stories of the "Red Scare" took the place of the "Yellow Peril" yarns in the second half of the previous century, but left them mainly untouched because they seem to work better on a "You-Had-To-Be-There" level. Well, in the light of current events and news coverage, I read a stand-alone novel by Baynard Kendrick, Hot Red Money (1959), penned at the tail end of the Golden Age and best described as a clutter of cloak and dagger stuff. 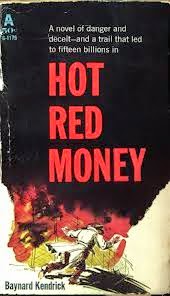 The main protagonist of Hot Red Money is Maurice Morel, Staff Writer for the Globe-Star Syndicate, whose journalistic activities has uncovered several Communist plots and spies over the years, earning himself a place on "Khrushchev's list of Free World annoyances that should be removed" – in spite of being their most valued double-agent in the United States. Moral has an appointment with an informer, a Lebanese sailor named Beshara Shebab, at a place named Beirut Café and Shebab can provide information on large sums of unREDistered (pun!) money in anonymous, numbered bank accounts in Lebanon. Typically, Shebab is knifed and (of course!) Morel is knocked unconscious, shortly after their meeting, in the alley behind the café.

Unfortunately, this is the point in the plot where Hot Red Money begins to loose some of its lucidity and there were moments when I felt like I was reading a series of events instead of a linear, forward-driven narrative – even introducing and fleshing out characters who quickly disappear again. Such as Special Agent Leonard Ducro, who's packed off to a sanitarium called Amity Rest Home to pump a patient on information. The confidential source for this tip was Morel and the dying words of Shebab, but, of course, the patient ends up being murdered in very pulpy-circumstances. I was hoping the story would partially follow the route of Patrick Quentin's A Puzzle for Fools (1936) and Jonathan Latimer's Murder in the Madhouse (1935) was referenced, but the rest home bits, in combination with the flow of the story, recalled the clinic-scenes from Raymond Chandler's Farewell, My Lovely (1940) – only less exciting than Philip Marlowe's ordeal.

The often unnecessary switches between characters, who can disappear in the background as soon as they've appeared, is further marred by the overrepresentation of perfectly covered spies in Morel's professional-and social circle – which makes for a muddled web of relationships and lots of padding. There were some interesting and historical bits and pieces, with some contrasting opinions here and there, but if you're really interested in the history of the Cold War than there are far better sources. And the meager payoff and predictable twist at the end was as helpful to Hot Red Money as Mussolini's military alliance was to Hitler's quest to conquer Europe.

I'm well aware that I'm padding out this review with utter drivel, because there isn't much left to say and I have barely written a full page. I'll add this though: Baynard Kendrick was capable of writing better detectives (e.g. The Whistling Hangman, 1937), thrillers (e.g. The Last Express, 1937) and spy/mystery stories (e.g. The Odor of Violets, 1940). Unfortunately, Hot Red Money is heading for the Worst-of List of this year.

Well, I guess Cold War thrillers are not for me and I'll most likely pick up something more traditional for my next read.
Geplaatst door TomCat on 5/06/2014