Death of a Mystery Writer

"But every clever crime is founded ultimately on some one quite simple fact—some fact that is not itself mysterious. The mystification comes in covering it up, in leading men's thought away from it."
- Father Brown (G.K. Chesterton's "The Queer Feet," from The Innocence of Father Brown, 1911)

The 56th volume of Case Closed, known to everyone outside of the English-speaking world as Detective Conan, begins with a story that can be described as a tale of two rings and a large chunk of the plot concerns a fatal poisoning in a locked room.

The opening story is, what is called in this series, a Metropolitan Police Love Story and begins in the cigarette smoke-filled squad room of the homicide division of the Tokyo Metropolitan Police and the police detectives are very inquisitive about the ring they spotted on the left-hand ring-finger of Detective Sato – which suggests she recently got engaged. Takagi denies it was him who finally scraped together the courage to pop the question to her. So who put a ring on her finger? The squad room is not given copious amounts of time to ponder this question, because a murder is reported and the plot then goes on to show what happened twelve hours before that phone-call. 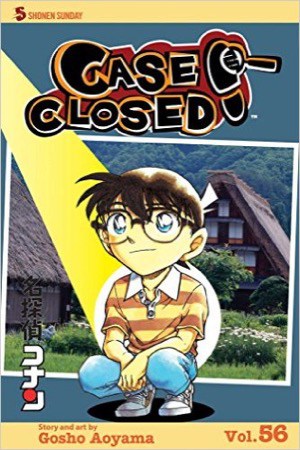 Richard Moore, Rachel and Conan are guests at the home of a well-known, prolific and popular mystery writer, Masataka Moroguchi, where they have come together for a special magazine interview about "the dawn of a new era of mystery novels." However, the novelist showcases a thoroughly unpleasant, even abusive, personality and he mentions in passing how he misses his previous editor – who apparently committed suicide in a room that was locked tight from the inside. This reference to the dead editor had a visible effect on the other people who were present: an assistant writer, a magazine editor and a photographer.

Conan reflects how he always seems to stumble over a dead body whenever he comes to a place smothered by "that thick, chocking atmosphere" and this time it is no different. Their host is found poisoned behind the locked door of his bedroom and the only key to the room was found clasped in his hand, but evidence begins to accumulate that seems to preclude suicide – one of those pieces of evidence concerns the victim's diamond-studded ring. So they put in a call to the Metropolitan Police Station.

I was able to work out the identity of the murderer and figure out the mechanics of this person's method, but that was mainly due to the fact that I remembered the locked room trick from volumes 18 and 19 – of which this one was a reworking. But, overall, a well-done detective story, which had some fun with churning out alternative solutions for the impossible poisoning.

The next case is a simplistic, but pleasant, story, which managed to make me slip over a red herring or two and ended up settling for the wrong suspect. Shame on me!

Once again, Doc Agasa is tasked with supervising a camping trip in the mountains for the Junior Detective League, but, as a dark evening began to dawn, they blew a front tire and the professor had completely forgotten to pack spares. So they are forced to seek shelter for the night in a dark, ominous looking house.

A house whose sole occupant is an elderly woman who fits the description of a storybook witch or a legendary mountain hag, but the real problem arises when a second group of stranded travelers arrive to ask for shelter. One of them, a young woman, gets her throat slit that very night and the identification of the unusual murder weapon is presented as the main objective of the plot – which made me lose sight of the whodunit aspect of the story. However, that aspect was not as secondary or unimportant to plot as I assumed it was. Oh well. You can't win them all.

The second half of this volume, consisting of five chapters, intertwines two minor stories with one of the series' main plot-threads: the back-story of Eisuke Hondo and the exact nature of his ties to Rena Mizunashi. Harley Hartwell even has a small role in this story!

Harley calls Conan to inform him Eisuke used to live in Osaka with his father and how they used to frequent a local restaurant, but what’s important is that the grandson of the restaurant owner has a photograph of them in his possession – and he happens to live in the same city as Conan and Doc Agasa. So they immediately establish contact and come up with an excuse to get their hands on the photograph, but someone seems to have gone through the guy's apartment. The photo album has vanished from a bookshelf and a folder of pictures was wiped from the computer hard drive.

However, Conan deduces the burglary happened minutes before they arrived and the intruder still had to be present in the apartment, which turned the story into a semi-locked room mystery. If you're observant enough, you can guess the hiding place by studying the artwork, but there are also two descriptive clues pointing straight to the hiding place and even revealing the identity of the burglar. So, a very simple, but surprisingly solid constructed detective story.

In the final chapters, the focus returns to the investigation into Eisuke's background and Conan learns he has been visiting hospitals all over the city. Apparently, Eisuke has been searching for his missing sister and she happens to look exactly like Rena Mizunashi, but the resemblance seems to be coincidental – because the blood types of these two characters do not match. Over the course of these chapters, Conan also prevents a couple of small-time conmen from pulling off a bank-transfer scam.

All in all, a nice, well-balanced volume of mostly cleverly plotted stories and even a bit of development in the ongoing story line of the series. I was amused! And the next volume of stories looks interesting. But for my next read, I have a detective story from the tail end of the Golden Age. So don't touch that dial!
Geplaatst door TomCat on 7/02/2016