I obliquely referred to Father Ronald A. Knox's "Ten Commandments for Detective Fiction" (1929) in my review of Ton Vervoort's Moord onder toneelspelers (Murder Among Actors, 1963), which played with one of his commandments without breaking it and suddenly reminded that Knox represents a glaring blind spot in my Golden Age reading – like Josephine Bell, R.A.J. Walling and the Coles. So far my sole exposure to Knox's detective fiction has been his Chestertonian short story "Solved by Inspection" (The Oxford Book of English Detective Stories, 1990), but somehow, his novel-length mysteries never left the big pile. Why not do a little penance by reading his first Miles Bredon mystery? 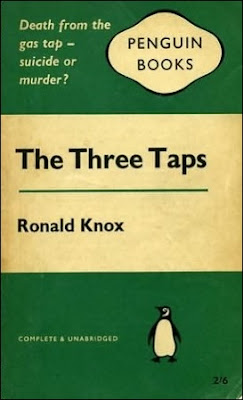 You can definitely chalk Knox's The Three Taps (1927) up as another detective novel I should have gotten to a lot sooner, because it was a fine and immensely enjoyable detective yarn. A detective yarn that possibly had some influence on such lauded mystery writers like Anthony Berkeley, Leo Bruce, Christopher Bush and J.J. Connington.

Knox sets the tone, right off the bat, with a humorous introduction to Miles Bredon's employer, Indescribable Insurance Company, whose fabulous reputation promises that "every step you take on this side of the grave" can be ensured with "handsome terms as the step which takes you into the grave" – guaranteeing "the man who is insured with the Indescribable walks the world in armour of proof." Even in the case of practical difficulties, the Indescribable would "somehow contrive to frank your passage into the world beyond." So many humorous wags have been made at the company's expense alleging "a burglar can insure himself against a haul of sham jewels" or "a client who murmured 'Thank God!' as he fell down a liftshaft." The whole story sparkles with witty and satirical descriptions and dialogue like that.

Indescribable Insurance Company most popular product is the so-called Euthanasia policy, which is potentially disastrous to any scheming relatives weary of waiting for nature to take its course.

A Euthanasia policy comes with very heavy premiums ("that goes without saying") and, if the policy holder dies before the age of sixty-five, a small fortune is paid to the heirs. But, if the policy holder outlives that crucial age, he becomes a pensioner of the company with every breath they take being money in their pockets. Their heirs assigns, normally looking forward to cash-in their inheritance, conspire to keep their "body and soul together with every known artifice of modern medicine." I wish this Euthanasia policy had become a shared-universe object turning up in the works of other British mystery writers. Such a waste it was used only here. Anyway...

Jephthah Mottram is a successful and wealthy businessman from Pullford, a large Midland town, who, two weeks before sixty-fourth birthday, was told by a Harley Street specialist he's suffering from a malignant disease – giving him no more than two years with increasing pain. Mottram needs ready money to pay doctor's bills, treatment and foreign travel, but all his wealth is tied up and money is pretty tight. So he went to the Indescribable to try to negate on his Euthanasia policy with a business-like offer. Indescribable pays back half the premiums from the time the policy started and, if he dies before his sixty-fifth birthday, pay no insurance. And, if he lives, no annuity. Naturally, they refuse to cancel the original contract, but it would not be long until they have send out their in-house detective to investigate their clients untimely passing. 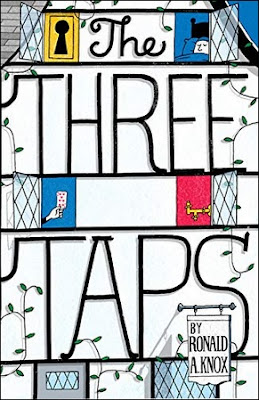 Indescribable retained its own private detective, Miles Bredon, who's introduced "a big, good-humoured, slightly lethargic creature still in the early thirties" whose excellent mind is "the victim of hobbies which perpetually diverted his attention." There were, however, two events, or interventions, that stirred his mind in the right direction. One is that his brilliant wartime record as an intelligence officer allowed him to accept the position as an insurance investigator on his own terms. Namely that he didn't have to sit in an office all day and play around at home until he was needed. Secondly was his marriage to Angela who had no illusions other than spending her life with "a large, untidy, absent-minded man who would frequently forget that she was in the room." A man who needed a nurse and chauffeur as much as a wife, but I don't think there was a better and funnier husband-and-wife detective until Kelley Roos' Jeff and Haila Troy arrived on the scene in the 1940s.

So, one day, Miles Bredon is asked to go with Angela to Chilthorpe, a small town, where Mottram always spends his annual, two-week fishing holiday and always stays at the same inn, the Load of Mischief. Mottram appears to have met with an unfortunate accident with the gas, but some of the silent witnesses suggest it could have also been suicide or murder.

Mottram went to bed the previous night, took his sleeping-draught and either turned on the gas-tap or forgot to turn it off, but, when the door was broken down, they discovered that the windows were wide open and held by its clasp – which means "there could have been no death." So that means a person or persons unknown interfered with the scene, but there are "iron bars on the inside to protect it from unauthorized approach" and the door was locked with the key on the inside. This adds another impossibility to the problem whether it was an accident, suicide or murder. When the body was discovered, the main gas-tap was turned off, but there were "no marks of fingers turning it off." A fact that in case of suicide is utterly impossible and in case of murder needlessly stupid and inexplicable.

So there you have thoroughly puzzling and inexplicable death buzzing with contradictory facts and evidence with the main question being whether it was an accident, suicide or murder. This approach strongly reminded me of Connington's The Case with Nine Solutions (1928) and Bush's The Case of the Tudor Queen (1938), which center on finding the right combination of accident, suicide or murder to explain double deaths. John Rhode turned this combination-lock style of plotting on its head in Death in Harley Street (1946) with a fatal poisoning that neither have been an accident, suicide or murder. You can see how Knox may have influenced Connington's 1928 novel which, in turn, provided a model for Bush's The Case of the Tudor Queen and Rhode added a twist to it. However, you can't really compare Knox or The Three Taps to any of those big bugs and giants of the so-called humdrum detective story. 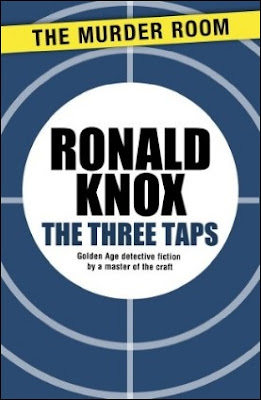 There's a technical aspect to the plot typically associated with Crofts and Rhode, but The Three Taps stands much closer, in spirit, to Berkeley's The Case of the Poisoned Chocolates Case (1929) and Bruce's Case for Three Detectives (1936). A third detective enters the story when Bredon discovers that the investigating policeman is an old army friend, Inspector Leyland of Scotland Yard, who take opposite views of the case. Bredon naturally prefers "suicide masquerading as accident" while Leyland favors "murder masquerading as suicide," but there's a litany of clues and red herrings that keep messing with their pet theories. Most importantly, the gas-tap, the locked door and open windows, but there's also an half-finished document, a guestbook signed on arrival, a letter to a local rag attacking Mottram and a wound-up, eight-day watch – coming on top of shocking lack of motives or opportunity. Leyland and the Bredons have only three potential suspects to work with.

Firstly, there's the victim's anti-clerical, diminutive secretary, Brinkman, who may have been in the best position to have done some tampering, but lacked a motive. Simmonds is Mottram's disinherited nephew who disliked his uncle very much and possible had a foot inside the door of the inn, but would not have gotten a dime out of his uncle's death. Mr. Pulteney is a schoolmaster on holiday with no apparent link to the victim, except staying at the same inn, but "shows rather too much curiosity" as he acts almost like a fourth detective. Pulteney even draws an interesting comparison between schoolmasters and detectives as part of his function is having to figure out "who threw the butter at the ceiling, which boy cribbed from which, where the missing postage-stamp has got to." This was echoed more than a decade later by Dr. Gideon Fell in John Dickson Carr's The Problem of the Green Capsule (1939).

There's an element to the story, a core component of the puzzle plot, clearly betraying the influence G.K. Chesterton had on Knox. Mottram had been pestering the local bishop whether it's "lawful to do evil in order that good might come." I don't think he handled this good-evil paradox as good as Chesterton would have done, but it was put to good use as an important puzzle-piece.

Miles, Angela and Leyland throw themselves at these contradictory problems with all the zest and zeal of spirited amateur detectives instead of salaried employers. A discussion of detective stories is used to check which brand of cigarettes everyone is smoking and a fake conversation is staged for the benefit of an eavesdropper, but some of their questions prove to have unexpected answers and even the best laid plans can backfire. Slowly, but surely, they work towards a solution. Well, there actually are three solutions with two of them being false-solutions in the tradition of Berkeley. However, the three solutions is also where the only flaw of the story is revealed.

The Three Taps is one of those detective novels in which one of the false-solutions is better and more inspired than the correct solution. Not that the correct solution is bad, or unsatisfying, but not as clever or inspired as the first false-solution. What the solution lacked in brains was made up with guts, because it was very gutsy to use it as an explanation. And it worked!

So, all things considered, The Three Taps is a cut above the average, 1920s detective novel and portent of things to come with its sparkling dialogue, rich storytelling and a complicated, puzzle-driven plot – crammed with clues, detectives and false-solutions. And perhaps had a bigger hand in shaping the British detective story of the 1930s that it has gotten credit for. So, in short, a mystery reader's detective novel!

A note for the curious: Robert Knox's older sister, Winifred Peck, wrote two detective novels herself, The Warrielaw Jewel (1933) and Arrest the Bishop? (1949), which were reissued in 2016 by Dean Street Press. She well worth a read to everyone who has a taste for those alternative Crime Queens who have been unearthed over the past few years. Another thing... did you know Knox may have influenced Orson Welles' 1938 radio-hoax with his January, 1926, broadcast of "a simulated live report of revolution sweeping across London." Knox was somewhat of an originalist, wasn't he?