The Problem of the Green Capsule (1939) by John Dickson Carr

Somewhat recently, I reread two of John Dickson Carr's reputable locked room mysteries, The Three Coffins (1935) and Till Death Do Us Part (1944), but the latter has only gained its reputation as one of his all-time greats over the past two decades – elevated by the internet from a mid-tier title to top 10 material. At the same time, his monumental, landmark locked room novel received a downgrade. I ended up agreeing about Till Death Do Us Part, but The Three Coffins remained to me an otherworldly performance more than deserving of its once colossal status. 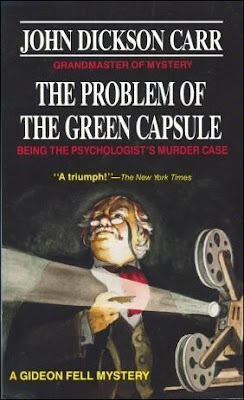 So decided to reread another one and was torn between The Plague Court Murders (1934) and The Crooked Hinge (1938) with The Reader is Warned (1939) as a dark horse, but ended up with The Problem of the Green Capsule (1939). There are two reason why I picked that one over the other three.

The Problem of the Green Capsule is another title who received a reputational boost during the internet age of the genre and one that has been at the back of my mind ever since discovering Christopher Bush. Bush was to the unbreakable alibi what Carr was to the locked room, but he tried his hands at a Carr-style impossible crime novel with The Case of the Chinese Gong (1935) and has "a situation worthy of Dr. Fell." In my memory, The Problem of the Green Capsule retroactively became a Bush-style detective novel with an alibi problem that would have delighted Ludovic Travers and wanted to reread it to test my recollection of the plot – which actually fitted the theme of the book like glove. I'm doing it on hard mode as my first read was a Dutch translation titled Blinde ooggetuigen (Blind Eyewitnesses). So let's see how Watson-like my memory really is!

The Problem of the Green Capsule, originally published as The Black Spectacles and subtitled "being the psychologist's murder case," opened in the Street of Tombs, Pompeii, where Marcus Chesney is holidaying with his family and cronies. A party comprising of his brother, Dr. Joe Chesney, whose professional skills leave something to be desired, but generally well liked and "lots of people swear by him." Marjorie Wills is the sweet, innocent looking niece and ward of Marcus, but she has a temper and "sometimes uses language that would startle a sergeant-major." Professor Ingram is a psychologist and an old crony of Marcus with whom he had "eternal, non-stop arguments" about crime and psychology. Wilbur Emmet is Marcus' tall, wooden and "spectacularly ugly" business manager. Finally, there's a young research chemist, George Harding, who Majorie met on their holiday and they quickly fell in love with each other.

Marcus tells George that, in spite of his wealth, neither he or his inner circle is accustomed to take three-month holidays, but circumstances back home forced them to take a break. 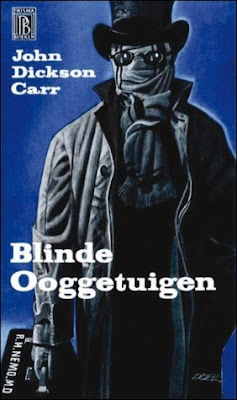 Several months previously, the village of Sodbury Cross became the playground of "a criminal lunatic who enjoys poisoning people wholesale" as three children and an 18-year-old girl were poisoned (one fatal) with strychnine laced chocolates, which came from Mrs. Terry's respectable tobacco-and sweet shop in High Street – who does not sell poisoned chocolates as "a regular thing." So the police believes poisoned sweets were left in the shop when Mrs. Terry's attention was distracted. But there's another possibility suggesting Marjorie had planted the poisoned chocolates. Now she can't even walk down the street without the danger of having mud thrown in her face by the village children, which is why they decided to go on a long holiday. However, the situation had barely improved upon their return. And things got much worse!

Marcus is a peace grower who fancies himself a scholar and his pet theory is that "ninety-nine people out of a hundred, as witnesses, are just plain impossible." To prove his point, Marcus stages a psychological experiment at his home with Marjorie, George and Professor Ingram as audience and eyewitnesses. George is filming the experiment with a small ciné-camera. So nothing what happened on the stage was unobserved.

What they see is Marcus sitting at a table with a box of chocolates and writing instruments when a curious figure enters the room in a long coat, collar turned up, hat pulled down, dark glasses and face wrapped in a muffler – all bundled up like the Invisible Man. The thing in the top-hat carried a black bag with R.H. Nemo, M.D. crudely painted on it. Next thing he does is push "a fat green capsule" down Marcus' throat, took the bag and left through the French windows. A few minutes later, Marcus is dead of cyanide poisoning!

A clever murder serving Chief Constable Major Crow and Detective Inspector Andrew Elliot with a peach of problem, because there are three witnesses who saw the murder happen under their eyes. But they can't agree on what they saw. On top of the blind eyewitnesses, they represent "a triple alibi which all the weight of Scotland Yard cannot break." Carr assured the reader in a footnote "that there was no conspiracy of any kind among the three witnesses." So an exasperated Elliot turns to Dr. Gideon Fell to help him make sense of everything. 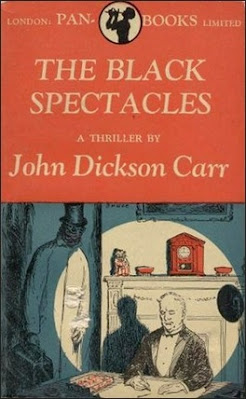 Dr. Fell is at the top of his game here and states upon appearing that if he "cannot do the thing handsomely," he's "not going to do it at all," which was a reference to his drinking habits, but can also applied to his detective work. Slowly, but surely, Dr. Fell brings clarity to an incredibly muddled problem by examining the questions Marcus had prepared, which were laced with psychological traps. Why all the answers were different. There's also a brilliant plot-thread with a clock that could be tampered with and how it ruined a fourth unshakable alibi. It's almost a shame Carr used the trick here as a side issue as it could have carried a whole plot by itself. Something as ingenious and inspired as the alibi-trick from Bush's Cut Throat (1932).

More than the galore of alibis, false-solutions and Dr. Fell's booming presence, I enjoyed and marveled at Carr's ability to rub the truth in your face with one hand and pull the wool over your eyes with the other. I remembered the murderer's identity from my first read, but not much else and was amazed to discover how subtly blatant he was here. Carr planted psychological clues in the mind of the reader that doubled as blind spots to hide the murderer without keeping back any clues. Carr was at his best when he was really cavalier with his clues and red herrings.

Another thing that came as a kind of surprise is how spot on my comparison with Bush turned out to be. I discovered Bush long after my first reading of The Problem of the Green Capsule, but it really reads like Carr's take on a Bush-style detective novel with its multiple alibi-puzzle and two different crimes closely-linked in time or place – a staple of Bush's 1930s detective novels (e.g. Dead Man Twice, 1930). I don't think Carr wrote it with Bush in mind and, as the ending demonstrated, Carr was a better showman than Bush. An ending with two things that deserve to be highlighted.

Dr. Fell explains why has an unfair advantage over the police as he started out as a schoolmaster and "every minute of the day the lads were attempting to tell me some weird story or other, smoothly, plausibly, and with a dexterity I have not since heard matched at the Old Bailey." So he has valuable experience with habitual liars and that comes handy in this particular case. Secondly, Dr. Fell precedes his explanation with a lecture on poisoners reminiscent of his locked room lecture from The Three Coffins, in which he famously broke the fourth wall ("because... we're in a detective story, and we don't fool the reader by pretending we're not"). The lecture on poisoners also breaks the fourth wall, but in a much more subtle way as Dr. Fell tells his audience he will be discussing a particular type of poisoner by looking at "a dozen well-known examples from real life." More importantly, the psychological profile of the poisoners under discussion fits only one of their suspects. All he has to do after the lecture is explain the nuts and bolts of the case. And those aren't any less ingeniously played out as all the psychological trickery. Carr must have had a blast putting the plot of this one together.

The Problem of the Green Capsule is a double triumph as Carr demonstrated didn't need to lean on his hermetically sealed rooms, seemingly impossible murders and suggestions of the supernatural to write an elaborate, maze-like and scrupulously fair and logical detective story. The locked room murders and impossible crime are simply there to make everything more challenging and fun. So this triumph is a shining example of the purely plotted, 1930s whodunit and deserves to be reprinted. I suggest that potential reprint edition to be titled either The Case of the Green Capsule or The Case of the Black Spectacles.