Elspeth Huxley was a British conservationist and renowned author of biographies, memories and fiction about Africa, whose most well-known work is the semi-autobiographical The Flame Trees of Tikha (1959), but among her forty-some books are a handful of detective novels – three starring her series-detective, Superintendent Vachell. Murder on Safari (1938) is perhaps Huxley's best remembered mystery and prompted one critic to declare her "a dangerous rival to Agatha Christie." Regrettably, Huxley's modest contribution to the detective story, as the Arthur W. Upfield of Africa, has been largely forgotten today. 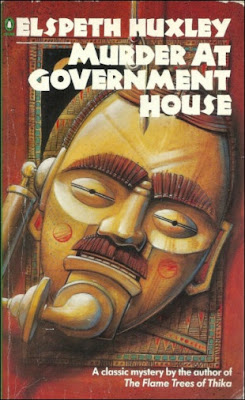 Huxley wrote the three Vachell mysteries during a five-year world tour to avoid playing shuffleboard on the ocean voyages and returned to the genre two decades later with two standalone novels, The Merry Hippo (1963) and A Man from Nowhere (1964). But it was her trio of exotic, 1930s mysteries that cinched Huxley's place in the annals of crime fiction.

Murder at Government House (1937) marked Huxley's debut as a mystery novelist and takes place in the British colony of Chania, Africa, where Sir Malcolm McLeod acted as the King's representative.

Sir Malcolm came into the colonial service from the outside and the Colonial Office took "a rare gamble" by offering him the Governorship of British Somaliland, but he had introduced "more reforms and innovations" there than during its entire existence as part of the Colonial Empire, which had earned him the appointment to Chania – a senior Governorship. And he took a hands-on approach to governing the colony. One of his first actions was reviving a long, vaguely discussed idea of federating Chania with a neighboring Protectorate to the north, Totseland. Something that is seen as a first step towards "welding into one confederacy the territories under British rule lying between the Zambesi and the headwaters of the Nile." A plan not entirely without obstacles or opposition.

The story opens with a Government House dinner-party in honor of Sir Bertrand Flower, the Governor of Totseland, which preceded their discussion merging the two countries into one territory. A huge stumbling block is the amalgamation of the two railways as both territories believe the neighbors railway is "nothing but a collection of scrap-iron." However, the meeting is prevented when murder rears its ugly head.

Sir Malcolm is found strangled to death in his private office and his murder poses something of a locked room problem. Both windows were closed and locked with catches that can only be worked from the inside. The door to the Governor's office was guarded "day and night" by a sentry and the other two exits were under observation. This is just one of the many problems facing the Canadian-born Superintendent Vachell.

First and foremost, there's a whole slew of potential suspects hovering around Goverment House. Maisie is "the girl-wife" of the Director of Education, Mr. Watson, who's "principal source of scandal" and the mistress of Sir Malcolm – everyone held their breath to see what action the injured husband was going to take. Victor Moon is the Secretary for Native Affairs and he's not a great admirer of his immediate senior, Mr. Pallett, who's the Colonial Secretary and now Acting Governor. But despite his long, successful career, Vachell discovers Pallett is unable to stand up to open opposition or bullying. Donovan Popple is a settler, farmer and trader with a twenty-five year history in Chania and has called Sir Malcolm a "damn fool, pocket Mussolini," which makes him a primary suspect when his thumbprint is found at the crime scene. Mr. Jeudwine is the slippery private secretary of Government House who gives "the impression of dwelling apart with thoughts profounder than those of ordinary men." That's not all as "too many darned people in this murder," but there are also outside forces Vachell has to take into consideration. 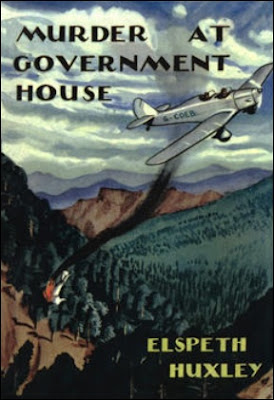 Vachell is told about "one of these strange secret societies that periodically crop up among natives," the League of the Plaindwellers, who have an ax to grind with the British government over the Wabenda witchcraft case. Someone else tells him there's a Somalian organization, Black Aisa, who have personal motive dating back to Sir Malcolm's governorship of British Somaliland. So, luckily, Vachell finds an old friend and anthropologist, Olivia Brandeis, staying at Government House to help him sort out the whole mess. One reviewer noted on the GADwiki that Brandeis comes across as a young incarnation of Gladys Mitchell's Mrs. Bradley. I kind of can see that comparison, especially during the opening chapter.

Their joined-investigation presents a faded, but fascinating, snapshot of a time and place now long-gone, which were nearly all tightly-woven into the fabric of the story and not merely confined to the realm of colonial politics of Goverment House – touching everything from settlers to the natives. Such as the Timbergrowers' Association wanting to know why the blazes they didn't use local hardwood for the governor's coffin or the less pleasant sideline in the way local natives deal with curses, witchcraft and witches in general, which leads to a gruesome, unavenged murder of a 10-year-old girl. A lot less darker is that magical, almost surrealistic scene when Olivia hits upon a secret meeting of the Plaindweller League and "felt as if she were another Alice translated into an African wonderland."

So here you have why Huxley was to Africa what Upfield was to the Australian outback as she wrote a detective story that could not have taken place anywhere else except in 1930s colonial Africa. Murder at Government House had everything to turn it into a minor classic of the so-called regional mystery, but the plot is frustratingly uneven and not entirely fair.

Huxley held back a lot from the reader and, in particular, the motive is something you can only guess at while an important clue, or hint, regarding the how was obliterated by the passage of time. However, if you've done your homework (i.e. read detective stories), you should be able to put one and together to figure out the murderer's identity. There were two aspects about the murder that made this character suspiciously standout, but you can't figure out how, exactly, it was done as those clues were not available. Don't expect too much from the locked room-angle. The whole locked room setup was used for something completely different, which could have worked beautifully with more clues as the trick was quite clever.

So, purely as a detective story, Murder at Goverment House was pretty much the same as my recent experience with Nat Lombard's Murder's a Swine (1943). A detective story that was better written than plotted with a ton of historical interest that could not have taken place anywhere else except in that specific time and place. This makes it difficult to recommend.

Murder at Government House was not a bad read at all that actually made good use of the story's setting and enjoyed my time with it. The problem is that it's, plot-wise, a sloppy, poorly worked-out detective story that could have used an editor to smooth over the plot. Normally, a poor and sloppy plot is enough to sink a detective story for me, but here, the good ever-so slightly outweighed the bad.