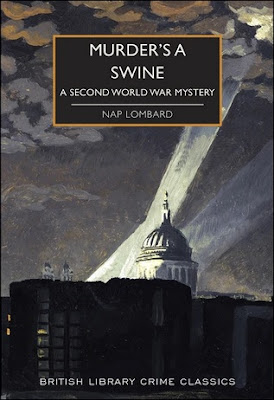 Murder's a Swine was published in the United States as The Grinning Pig and belongs to that British dominated sub-category of the genre dealing with the Second World War. A period in history that gave the British home front detective story a new and distinctively unique flavor that can never be replicated again.

Murder's a Swine is set during the so-called "Phoney War," an eight-month period of restless inactivity on the battlefield, which began with the blitzkrieg on Poland and ended with May 1940 invasion of the Low Countries – proverbial calm before the storm. Someone remarks in the story that another character must think it's "a rum show to the last war," but the Phoney War completely upheaved British society. There were enforced blackouts, sandbag barricades, gas masks, children being evacuated to the countryside and the general effects of mobilization.

This is the backdrop of Murder's a Swine. A story that begins with a young ARP Warden, Clem Poplett, accidentally stumbling across a decomposing body behind the sandbags of an air-raid shelter. The body is that of a man dressed in ARP overall and Wellington boots with a bullet hole in his back. Poplett was not alone when he made the gruesome discovery in the shelter. A resident of a nearby block of flats, Agnes Kinghof, had accompanied him into the shelter and she has together with her husband tangled with murder before. Agnes and Andrew Kinghof solved their first case in Tidy Death (1940). Much to the annoyance of Captain Kinghof's cousin, Lord Whitestone, who's "someone of considerable importance at Scotland Yard."

Lord Whitestone prefers the Kinghofs go to "one of those dreary, disgusting leg-shows" or the Yellow Chicken before they're "compelled to raid it" instead of getting involved with police business again. But in their defense, the murderer doesn't leave them much choice.

Firstly, the victim is identified as a long-lost relative of one of their neighbors and the residents become the target of a series of sick pranks. A stick with a pig's head is fixed to the service lift and frightened a woman into hysterics when it appeared at her bedroom window, "all shining and blue," snout pressed against the pane – before disappearing again. This is followed by more pranks and a mocking letter, "greasy fellow aren't i," signed "the pig-sticker." 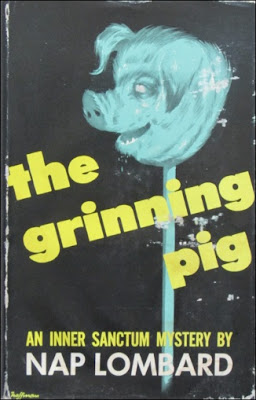 So they have to take a closer look at their own neighbors to see if any of them might be the murderer, which is easy as half of the flats stand empty, but still enjoys enough occupancy to fill out a decent-sized pool of suspects. Mrs. Rowse is known to the public as the author of popular stories for growing girls, "Phyllada Rounders," who shares a flat with her friend, Mrs. Adelaide Sibley. Mrs. Sibley who was frightened by the pig's head at the window. Madame Charnet is a doddering, deaf old French woman who came to England right before Germany stopped caring about borders. Felix Lang is a medical student with an unclear background and no means of identification, while George Warrender worked late nights at a government office and was seldom seen by the tenants. A potentially significant fact as another suspect is the unknown, long-lost prodigal son of the victim and he might be in England under a new name. There's also the presence of the Free British Mussolites whose goal is to tear "filthy veil" of Democracy from "the fair face of England." Apparently, the FBM hate the Scotsmen ("who wear women's skirts in the streets of their Babylonic cities") more than communists, socialists, unionists, bureaucrats, atheists, the Freemasons and even the Jews. Yes, the FBM are played as a joke. Like a comedically inept counterpart of Oswald Mosley's Blackshirts who bristle when learning nobody locally has heard of their "influential organization."

There you have all the ingredients for an engrossing, first-class World War II detective story, but, regrettably, the quality became split between the writing and plotting. And it's a notable split.

Let's get the good out of the way first. Gordon Stewart and Pamela Johnson knew how to write and set a scene, which is the strength of Murder's a Swine. There are several very well written, memorable set pieces strewn throughout the story. Such as a second pig head, "a red Punch's cap set between the ears," appearing during an illegally-staged street show of Punch and Judy or the murderer with pig mask terrorizing and trying to add another body to score – like some demented Scooby Doo villain. There are the snippets of life under wartime conditions like the fire-precautions committee meetings, the big ARP casualty exercise and the secret FBM meeting with the hayloft scene. What elevated the story is that the dark, depressing wartime atmosphere and thriller-like bits were brightened with flashes of humor and lighthearted banter from the Kinghofs that can stand comparison with Delano Ames and Kelley Roos.

But, purely judged as a detective story, Murder's a Swine turned out to be a poor showing as the murderer stood out like a scarecrow. I thought it was so thickly laid on and obvious that I half-suspected it was a red herring and began to cast suspicious glances in another direction. There's another character who would have fitted the role of murderer much better (Pyrz Cbcyrgg). That being said, the unmasking of the murderer was very well handled and how this person was compelled to confess was unusual, to say the least!

So here we have a classic example of a detective novel that was better written than plotted and therefore, as someone to whom plot is the foundation of any detective story, I can only recommend it to fans of bantering, mystery solving couples or WWII era crime fiction. Sorry, Kate, but my vote is certainly not going to Murder's a Swine for 2021 Reprint of the Year Award. My purist streak doesn't allow it.

Nevertheless, while the plot of Murder's a Swine failed to win me over, Martin Edwards noted in his introduction that he was sure it "helped its original readers to forget, for an hour or two at least, the miseries of wartime," because "to lose oneself in an enjoyable, unserious book is an under-estimated pleasure" – especially during an ungoing pandemic and lockdowns. I agree as it was an enjoyable read with some very memorable scenes. So, in that regard, it comes recommended without hesitation.