After slogging through Jonathan Latimer's tediously paced The Dead Don't Care (1938), I needed a palate cleanser and there were only two names that immediately came to mind, John Dickson Carr and Bill Pronzini, who have receded into the background of my blog over the last couple of years – which can entirely be blamed on the avalanche of reprints and translations. Don't you dare to stop, DSP and LRI! 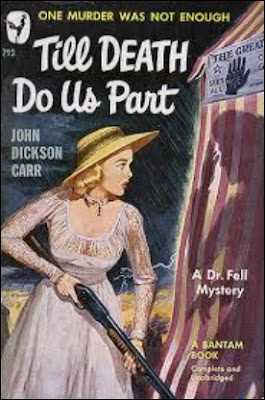 Predictably, I decided to go with the inimitable artisan of the pure detective story and purveyor of miracles, but my next read is going to be Pronzini's The Flimflam Affair (2019). So you know what to expect next. But first things first.

I've wanted to reread Carr's Till Death Do Us Part (1944) for a while now, because, over the past fifteen years, the book has been elevated from a mid-rank title in the Dr. Gideon Fell series to one of Carr's ten best (locked room) mystery novels – a trend I first noticed on the message board of the now defunct JDCarr.com (archive). Since then, I've seen nothing but praise and high, often five-star, ratings for Till Death Do Us Part online. So I was curious to see if this newly proclaimed masterpiece stood up to rereading. Yes, it absolutely did!

Till Death Do Us Part is a testament to Carr's gift as a natural storyteller and a demonstration of his abilities as an artisanal craftsman of fantastic, maze-like plots, which beautifully complemented each other here. An ultimately simple idea swathed in layers of obfuscation without the plot becoming a convoluted, tangled mess of plot-threads.

Lesley Grant is the linchpin of the plot of Till Death Do Us Part. A young woman who looked about eighteen years old, "in contrast to the twenty-eight she admitted," who's a recent addition to the charming, old-world village of Six Ashes. Lesley turned "the heads of half the males," but after six months, she becomes engaged to "a rather well-known young playwright" of psychological thrillers, Dick Markham. Very much to the disappointment of Six Ashes. For two years, the village has tried to get their local celebrity together with a local girl, Cynthia Drew, but Dick refused to marry "just to please the community."

When the story opens, Dick and Lesley are on their way to a garden party with a bazaar at Ash Hall. Lesley wants to see the fortune teller before mingling with the rest, but she leaves the tent looking upset. So he goes into the tent to have a word with the Great Swami, palmist and crystal gazer.

The man under the white linen and colored turban is none other than the celebrated Home Office Pathologist, Sir Harvey Gilman, who's "one of the greatest living authorities on crime," but their conversation is cut short by the crack of a rifle-shot – after which "the world dissolved in nightmare." Sir Harvey is struck in the shoulder by a bullet. Before rushing into the tent, Dick had pressed a rifle from Major Price's miniature shooting-range in Lesley's hands. And she says the rifle went off by accident. But did it? 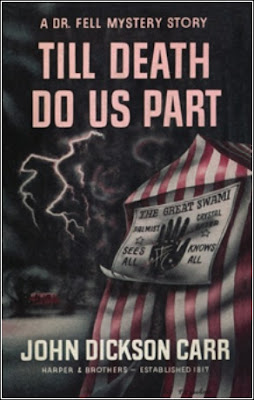 Sir Harvey only has a flesh wound and is brought to his cottage, but instructs Doctor Hugh Middlesworth to circulate the report that he was dying and summoned Dick to tell him an unsettling story.

According to Sir Harvey, Dick's youngish looking fiance is a forty-one year old poisoner, named Jordan, who has killed three men with "a hypodermic full of prussic acid" inside rooms that were found to be locked or bolted from the inside. So they were all as suicides, but Sir Harvey, Superintendent David Hadley and Dr. Gideon Fell believed they had been cleverly murdered. Only the locked rooms had them utterly beat. Someone from Scotland Yard is on his way to Six Ashes to identify Lesley as the elusive poisoner.

Lesley Grant is a very similar character to Fay Seton from He Who Whispers (1946). Two women who find themselves ensnared in a web of murder and suspicion.

Fay Seton is arguably Carr's most well-known tragic (female) characters who became the victim of a slanderous whisper campaign, following her engagement to Harry Brooke, which accused her of being bloodsucking vampire – malicious gossip and rumors are reinforced by two seemingly impossible (attempted) murders. The apparent handiwork of a supernatural being. Lesley is accused of being a serial poisoner of men and this claim is strengthened when her accuser is murdered in circumstances that are identical to the past murders.

On the morning following the incident in fortunetellers tent, Dick receives an early, anonymous phone call telling him to immediately go to Sir Harvey's cottage, because if he doesn't come at once, he'll be too late. So he hurries towards the cottage, but, when he arrives, sees how somebody stuck a rifle over the boundary wall of Ashe Hall Park and fired a shot. And he saw how the star of a bullet-hole jump up in the window-glass of the cottage. However, Sir Harvey was not killed by a bullet.

Sir Harvey is found sitting in an easy-chair, beside a big writing-table, in the middle of the sitting-room with a hypodermic syringe lying on the floor and the unmistakable odor of bitter-almonds in the air. The door to the sitting-room is bolted on the inside and the ordinary sash-windows are fastened with metal catches. So how did the murderer enter or leave the room? And who switched on the lights in the locked sitting-room seconds before the shot was fired? These locked room-tricks are a little bit more technical in nature than most impossible crimes found in Carr's work and basically found a new way to apply a very old locked room-trick, but it was innovating enough to reinvigorate the idea – making it even feel original. Carr pulled off a similar stunt with the impossible murder from the slightly underrated The Dead Man's Knock (1958), which found an ingenious new angle to another age-old locked room-trick. 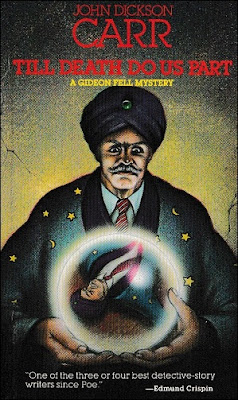 The murder of Sir Harvey brings Dr. Gideon Fell to the village and the news he brings drops one of many bombshells on the case, but it was great to see the good doctor again when he was at the top of his game.

Dr. Fell enters the story as only he can as he emerged from the back of a car, like "a very large genie out of a very small bottle," clad in a box-pleated cape, shovel hat, a pair of eye-glasses on a broad black ribbon and leaning heavily a crutch-handled cane. A few pages later, Dr. Fell is pacing through the garden of the cottage, immersed deep in thought, addressing "a ghostly parliament" with gestures and inaudible words. This is how I like to see Dr. Fell. A wheezing, larger-than-life Chestertonian figure who can be simultaneously perfectly logical and maddening enigmatic without negatively affecting the plot... usually.

Dr. Fell begins to peel away the various layers of the plot, but the problems remain as baffling and murky as the moment the whole case began in the fortuneteller's tent, because each answer posed new problems and questions – which began to gnaw at my memories of the solution. Where my memories deceiving me? Hey, it has happened to me before! This is why so few can match Carr when it comes to plotting and telling a detective story. Even when you know the solution, the plot still tries to throw sand in your eyes.

The solution is pretty solid and technically sound. An ultimately simple idea complicated by circumstances, personal secrets and an unexpected murder in a locked room. I think it was very impressive how Carr managed to keep everything shrouded in mystery until the ending with even Lesley's guilt or innocence being up in the air until the very last moment. There really was nobody better than Carr. Nobody!

So, all in all, Till Death Do Us Part was even better than I remembered and deserves its current reappraisal as one of Carr's top-tier mystery novels, but I have one caveat. Yes, Till Death Do Us Part is a five-star mystery novel, but it earned those stars on points rather than by a convincing knockout. Still, this is an excellent detective story that comes highly recommended.

A note for the curious: there are numerous references in the story to "a hard path across open fields towards Goblin Wood," which is the setting of Carr's most celebrated impossible crime story, "The House in Goblin Wood" (1947) – published as by "Carter Dickson." I like to believe this means the Dr. Gideon Fell and Sir Henry Merrivale series take place in the same universe. What a shame so very few writers pooled their series-detectives together.
Geplaatst door TomCat on 8/09/2019