The Libertines (1978) by Douglas Clark

In my previous review, I mentioned several modern classicists like the pharmacist of crime, Douglas Clark, who specialized in medical mysteries and ingenious, sometimes impossible poisonings that were quite popular in the 1970s and '80s – only to disappear into obscurity upon his death in 1993. Strangely enough, these retro mystery writers tended to vanished quicker and more thoroughly from popular culture than their Golden Age counterparts. But they, too, are being rediscovered today.

Douglas Clark has been fortunately enough to have all twenty-six of his Detective Superintendent George Masters and Detective Chief Inspector Bill Green reprinted over the past five years by Lume Books (formerly Endeavour Media). 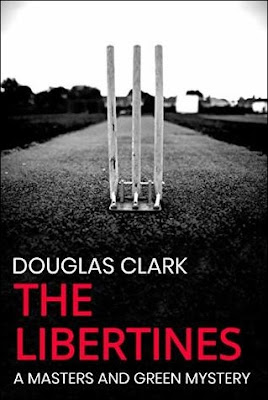 So, technically, the series is available again to the public, but they're very much hidden in plain sight. Lume Books is a small indie publisher that pumps out novels ("...over 3000 books written by 800 authors"), but settled on a bleak, unimaginative style of generic and uniform cover-art that gives the impression Clark wrote dark, psychological crime thrillers – which couldn't be further from the truth. Clark wrote traditional, fairly clued detective novels posing as a police procedurals with a pharmaceutical gimmick. And eschewed cheap thrills or plunging the murky depths of the human psyche. For example, the most rounded and fleshed out character in The Longest Pleasure (1981) is the botulism bacteria. Clark simply wrote pure, Golden Age-style detectives and howdunits.

The Libertines (1978) is the tenth title in the series and takes place on Samuel Verity's Ravendale Farm, situated in Ravendale Bridge, Yorkshire, which hosts a yearly cricket fortnight during high summer. Versity is one of the founding members of a cricket club, the Libertines, when none of the members had much money. So they were determined that it should not become a rich man's club, but "a cricket club anybody could afford to join" with everyone contributing something to hold the Libertines' fortnight. A tradition that began right after the war ended.

Three decades later, there are only three original members left. Samuel Verity and his long-time friend and London solicitor, William Dunstable, whose family will become intertwined as his son, Stephen, is dating Sarah – who's the daughter of Samuel and Sally Verity. But not everything is roses and sunshine. Old Tom Middleton, "an irascible old devil," is the third surviving member whose behavior is tolerated because he's a wine-shipper and furnishes the bar for the fortnight at wholesale rates. But he has become worse as his health declined. And very venomous.

Last year, Tom advised Sally Verity to keep "a motherly eye" on her daughter, because he had witnessed Sarah and Stephen "misbehaving at nights in the copse" when he was out on a light night walks. She called him "a dirty old peeping-tom" and Sarah not only denied it, but she was "quite willing to have old Dr Michaelson examine her to prove she was still intact." Stephen is less than pleased when he learns of this a year later and her brother, Teddy, also gets the Middleton treatment. Soon the younger members of the team are talking among themselves about "breaking the old bastard's neck" and that "the best place to dispose of the body would be the dung tank," which sets the stages for murder. Tom is not the first to bow out of the story with his nose in the air.

Nick Larter is an elderly, ailing and retired window cleaner who's not a Libertine, but he's been barman for the fortnight ever since it began. A fun, exciting summertime job that earned him a few extra pounds, but his health has been deteriorating rapidly and, while shaking Middleton's customary three drops of bitters in a gin glass, he collapses behind the bar – dying a few minutes later. A death that hardly surprises his doctor and unhesitatingly signed the certificate, but, three days later, Middleton dies in the wake of the first cricket game. So the local authorities order post mortems on both bodies, which revealed the presence of the quick-acting poison nicotine.

A double poisoning Green described as "one by a chance which is mathematically impossible" and "the other by a means which is physically impossible," but whether or not they count as impossible crimes depends on your generosity. I don't think Middleton's death has any claim to it, but Larter's poisoning is a different story. While serving behind the bar, Larter slipped with the bottle-opener and snagged his right forefinger on the serrated edge of the crown top, "a trifling cut," but he died minutes later with "a qualified doctor and a score of others as witnesses." But nobody could daub nicotine on a crown top expecting the victim would touch it, "let alone scratch his finger on it." However, the trick here is figuring out how the two poisonings can be linked together. Don't read it solely for the impossible crime element. 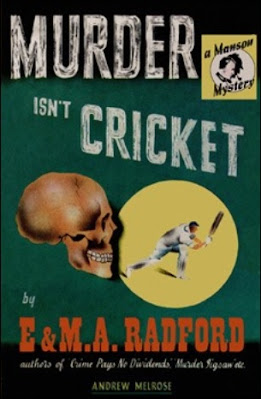 Clark excellently contrasted the death of the "poor old retired window cleaner" with the murder of the "well-heeled wine importer who lived hundred of miles apart" and "the only possible link between those two was this annual cricket lark." This makes it a double murder that could have only taken place at Ravendale Farm during those two weeks of summer. A very well done and convincing closed-circle of suspects situation.

You can say contrast is the overarching theme of the story with the older characters struggling to keep up with a changing world and social mores, while the younger generation try to live up to the standards of the old-world while trying to find their own way and voice. Good examples of this are the conversation between Sally and Sarah concerning Middleton's accusation and Sam and Teddy trying to balance traditional and modern methods to run the family farm. I thought that made for a more interesting backdrop than the cricket scenes, which I don't understand and everything related to it completely went over my head, but I know it's supposed to be a boring, excruciating slow-paced game with older players taking naps – which doesn't seem like a sport that can be played with "a savage intensity." Playing cricket savagely sounds like a brutal game of curling or a grueling round of golf. Anyway...

So the characters, setting and setup are good and sound, but what about the plot, you ask? Not too bad. Admittedly, the clueing is a little sparse, but Clark's approach here wasn't without interest. Masters and Green begin to hunt for "anomalies in the conversations" conducted with the club members in lieu of physical clues to see if they can "explain away that which is odd or out of character." When they've sniffed out such anomalies, they "look very closely at those involved." Not wholly unlike Agatha Christie with one remark unmistakably echoing one of her 1940s mysteries ("Guvf qevax vf svygul"), but Masters and Green also have to search for a piece of physical evidence hidden somewhere on the farm. Where this piece of evidence was hidden points straight to the murderer, because only the murderer could have hidden it there. You can figure out where it's hidden and, in combination with the anomalies, identity the murderer with only the motive requiring a bit of educated guesswork. The whole puzzle is pretty solvable without being too obvious from the beginning. If you pay attention to what's being said and done, you can see where and how all the puzzle pieces fit.

There are, however, two (minor) drawbacks. The ending felt a little flat with Masters cutting a deal with the nonthreatening and even sympathetic murderer, but rather liked the final lines of the story. I already said Clark created a murder mystery that could only have taken place at Ravendale Farm during those summer weeks, which turns out to have been 100% preventable. Secondly, I don't think The Libertines is a good title for this kind of detective story. I don't think it really fitted the story. The Libertines' Fortnight or the more genre-driven Sudden Death would have been better titles. Looking at a glossary of cricket terms, Contrived Circumstances or Farm the Strike would have been even better titles for this cricket-themed detective novel.

But all things considered, The Libertines stands as a good, rock-solid and competently plotted continuation of the British Golden Age detective story with a poisoning-trick that would have received the nodding approval of the Queen of Crime herself. However, if you're new to the series, I still recommend you begin with the excellent Death After Evensong (1969).