Back in October, I read an excellently written and plotted post-Golden Age detective novel, entitled Death After Evensong (1969), which constituted my introduction to the work of a pharmaceutical executive turned mystery novelist, Douglas Clark – a specialist in medical puzzles and inventive methods of poisoning. Robert Adey's Locked Room Murders (1991) listed Death After Evensong as Clarke's sole contribution to the impossible crime sub-genre, but I found two more titles to add to the list. One of these titles is Clarke's penultimate novel. 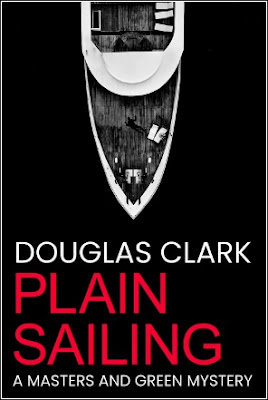 Plain Sailing (1987) is the twenty-sixth entry in the Detective Chief Superintendent George Masters and DCI Bill Green series. A lot of has changed between them since their second outing in Death After Evensong eighteen years previously.

All of the animosity and antagonism, permeating and poisoning their professional relationship, has not only completely dissipated, but they have become close friends outside of work. Masters was introduced as a tall, vain and unrepentant bachelor, but is now married to Wanda Masters and they have a young child together, Michael – who has Bill and Doris Green as "honorary grandparents." A very close relationship that was unthinkable two decades earlier. The opening of Plain Sailing has them even going on a much deserved holiday together, but, barely a day has gone by, when a patrol car pulls up in front of their cottage with terrible news.

Jimmy Cleveland is the 26-year-old son of a colleague and friend of Masters, DCS Matthew Cleveland, who has just found himself a good job, a nice flat and "a steady girlfriend," Janet. He also has a passion for sailing and took part in the King's Cup Week, but died unexpectedly under seemingly inexplicable circumstances "a mile or two out to sea in a small dinghy."

Jimmy had been out on the water for an hour and a half when the only other occupant of the dinghy, Harry Martin, raised the alarm and an American doctor answer the call for help. This doctor immediately recognized the symptoms of cyanide poisoning, which is where the problems begin. Cyanide is "the sort of stuff that works immediately," but Jimmy hadn't eaten or drank anything on board and gelatin capsule would have dissolved within twenty minutes. Suicide is very unlikely and Martin has no conceivable motive to kill him. So how did the murderer administer a dose of cyanide to a man isolated in a small boat out at sea? A situation somewhat like "one of those locked room mysteries."

A rather interesting aspect of the investigation is the reversal when it comes to emotional attachment to the case. 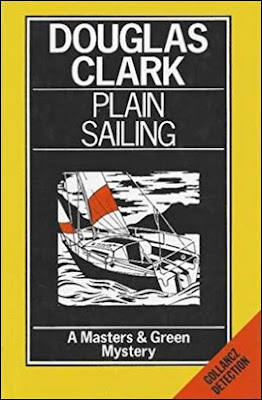 Generally, the detectives are the impartial outsiders, especially when they're police detectives, but the suspicious death of the likable young man, like Jimmy, seems to have made no impact on the large gathering of sailors, because they're "chattering about everything else under the sun" – except Jimmy's sudden death. This situation gives the story an unusual atmosphere befitting the strange circumstances of the murder.

However, the clever little poisoning-trick acts as the single support column for the entirety of the story and plot. And to be quite honest, the who-and why of the murder weren't as good, or inspired, as the how with exception of the tragic mistake that lies at the heart of the story. Something that wasn't helped by some obvious padding of the page-count.

Masters states early on in the story that they have to "soak in everything" and get "to know all there is to know about sailing." So we get some technical details and, in combination with the weakly handled who-and why, it became evident that the trick had come before the story. And the whole story was erected around it. Showing that Clark had lost some of his story-telling ability since the early Death After Evensong, which was as well written as it was plotted without any stretching to pad it out.

All of that being said, the poisoning-trick of the impossible crime was fairly original and fitted the sailing theme of the story. The kind of impossible poisoning Paul Doherty began to specialize in during the 1990s (e.g. The White Rose Murders, 1991) or you can find with some regularity in the Case Closed series (e.g. "The Loan Shark Murder Case"), but the idea and setting would probably have been better served had the novel been whittled down to a short story – which might have resulted in a classic sporting detective story centered on an impossible crime. Such a tale could have been an anthology staple!

Everything considered, Plain Sailing wasn't a bad detective novel, particular for its time, but it was a step, or two, down from the much earlier Death After Evensong. So my next read in the series is going to be a title from the early-and mid period with such promising sounding, poisonous puzzles as Sweet Poison (1970), Sick to Death (1971) and The Gimmel Flask (1977). Dread and Water (1976) has a premise reminiscent of one of those mountaineering mysteries by Glyn Carr. So my exploration of this series will be continued.

By the way, the quality of my reading appear to have taken a drop when I sidelined Harriette Ashbrook for a moment. A sign she'll be ignored no longer and have to return to the Spike Tracy series the moment 2020 rolls around?
Geplaatst door TomCat on 12/27/2019