John Russell Fearn unexpectedly passed away in 1960, aged 52, when he suffered a heart attack. A fate he unfortunately had to share with his father, Percy Slate Fearn, who died under similar circumstances and influenced Fearn to write a detective novel around "the consequences of early deaths from heart problems." 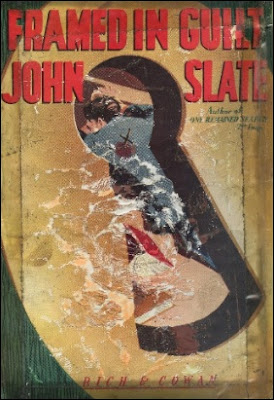 Framed in Guilt (1947) was originally published under the penname associated with his Maria Black series, "John Slate," but this is a standalone with Superintendent Henshaw on duty and was praised by Philip Harbottle as one Fearn's "most realistic" and "best locked room novels" – a very personal novel for more reasons than one. The backdrop and characters of the story were drawn from his days as a part-time typist for a solicitor's office in Birley Street, Blackpool.

William Barridge is a sober, quiet and meek man of forty-four, but looked "a good twenty years older," who has been married for twenty years and has three "obstreperous children."

However, it has a marriage that has gone cold and loveless, because he's stuck in a dead-end job as head clerk to a solicitor and has neither "the wit nor the courage to attempt anything better." So luxury, such as a maid, eludes them and even his children have just enough respect for him to say goodbye before going to school. And it's not much better at work.

The dingy offices of Henry Minton, solicitor and Commissioner-of-Oath, is located on the first-floor of a converted Georgian dwellinghouse, "smelling of ink, dry parchment, cold air and Monday morning," which is as cheerless as it sounds – brightened only by the presence of the office boy, Jimmy Elgate. A young lad who constantly has his nose buried in an American pulp magazine. Other two people working there are the junior clerk, Arthur Standish, and the typist, Sally Higson.

So they slip into the dull, grinding routine of yet another work day, but the routine is broken when Jimmy, Sally and Arthur Standish return from lunch and find the place locked up. Barridge is nowhere to be found.

One thing you need to know, before going on, that there are two different locks on each office door. A modern Yale lock and underneath it "preposterous keyholes" dating back to the days when a dungeon-like key was needed to (un)lock the doors, which were now redundant except to peek through. Jimmy decided to take peek through the ancient keyhole of Minton's locked office and spotted a body lying on the floor with a large knife protruding from the back.

The body belongs to the meek and mild head clerk, Barridge, but the only key to the door is in the constant possession of Minton and, at the time of the murder, he was in Liverpool on business. So how did Barridge enter the locked office of his employer, or how did his murderer get out, but what baffles Superintendent Henshaw even more is why anyone would want to kill a "harmless, spineless man" – even when evidence emerges casting the shadow of suspicion on two people. One of these two suspects, Mrs. Jennifer Carr, surprisingly falls into the category of cherchez la femme. Or does she? 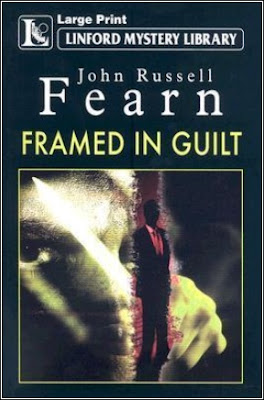 The detection here is combination of plodding police work, combing over the crime scene, checking alibis, questioning people, musing over clues and possibilities, complimented with bits and pieces of forensic detective work. Henshaw regularly calls upon the forensic experts to analyze the dirt under the victim's fingernails, ink on a letter in order to determine its age and make them do a microscopic examination of the murder weapon. Fearn was a pulp writer who had a tendency to indulge in the fantastic (e.g. Account Settled, 1949), but, sometimes, there are streaks of the Realist School in his work – both in characterization and setting. Such as the undistinguished solicitor's office and the normal, everyday people who work there from the opening chapter. You can also find these traces in Death in Silhouette (1950), Flashpoint (1950) and Pattern of Murder (2006) with its working class characters and backdrop.

Needless to say, the opening chapters and Henshaw's investigation are the best parts of the story, but the plot and solution has its problems.

My first problem is that the gist of the solution is kind of obvious and the only reason why it didn't kill the story are two red herrings, which are used here as roadblocks to that obvious answer. But you can still figure it long before Henshaw has worked out all the details. Secondly, the core idea of the plot is something I detest in detective stories, because, more often than not, it's just a lazy cop-out on the writer's part. So it's to Fearn's credit that he succeeded in whipping something decent and acceptable out of this otherwise hack plot-device, but it forces me to disagree with Harbottle that Framed in Guilt is Fearn's best locked room novels.

Admittedly, Fearn tries to do something else with the locked room mystery here, but he has written better and much more original impossible crime novels, such as Thy Arm Alone (1947) and Vision Sinister (1954), which doesn't mean I didn't appreciate what he was trying to do – especially when juggling with two of my big no-noes. But he has done the locked room better. And when you take a step away from the locked room angle, you have an overall well-done plot put together by "a weaver of a perfect crime." Someone with "the mind of a contortionist" that you can't help but feel a pang of sympathy for. The personal back-story also helped me appreciate the book more than I would otherwise have done.

So, all in all, Framed in Guilt is an interesting and unusual take on the locked room mystery, but by no means a classic of its kind. I think impossible crime fanatics and fans of Fearn will get the most out of this story.

A note for the curious: Philip Harbottle told me about the personal aspects of Framed in Guilt and provided this endearing image of Fearn as a part-time typist as told by a man who was a junior office boy at the time: "...this man was from another world... he showed no knowledge of law, no interest in the clients of the practice and he seldom spoke to anybody. At regular intervals he just was there, hawk-nosed, smouldering eyed, apparently unaware of his surroundings. Usually a cigarette dangled from one corner of his mouth, and one eye was half-closed against its rising smoke, as two fingers of each hand pounded the keys of the big, brief-carriage typewriter... faster than the girls could type with five fingers." Even when doing a part-time job, Fearn was the consummate pulp writer!
Geplaatst door TomCat on 12/31/2019