Murder Comes Back (1940) by Harriette Ashbrook

Harriette Ashbrook's Murder Comes Back (1940) is the sixth and penultimate novel of the short-lived, criminally ignored Spike Tracy series, which had been out-of-print for the better part of a century, but, last year, the whole series was unexpectedly reissued as inexpensive ebooks – courtesy of Black Heath Editions. You've to keep in mind that most of these titles used to be exclusive collector's items. So it's good to see them finally back in the hands of regular mystery readers. 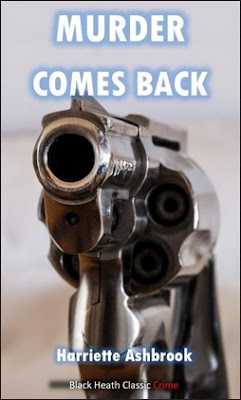 Last month, I burned through three of them and was impressed with all of them. The Murder of Cecily Thane (1930) was a breezy, lighthearted take on The Van Dine-Queen School and a good introduction to Spike Tracy. The Murder of Sigurd Sharon (1933) had taken the punch out of its ending by the relentless passage of time, but you can see how startling original the plot was when the book was first published. Murder Makes Murder (1937) simply is an excellent detective novel full of human interest, tragic characters and a shockingly original motive.

So I decided to open 2020 with one of the three remaining Spike Tracy novels on my pile, which includes The Murder of Stephen Kester (1931) and The Purple Onion Mystery (1941), but opted for the alluring story promised by the premise of Murder Comes Back – which is, as to be expected by now, deliciously original. It goes without saying that I was not disappointed.

Mrs. Moira Ballinger began life as Mathilda Grable, a clerk in the lowest basement of a New York mammoth department store, where she spent her days "selling hardware to harassed housewives" and "her nights in a hall bedroom in Brooklyn." A dull, unsatisfying existence until she suddenly "burst into the headlines" as The Department Store Cinderella.

Mathilda's unlucky lot in life was forever changed, not by "a fairy godmother" with "glass slippers and a pumpkin coach," but a stroke of fate that brought her into contact with the widowed owner of the department store, Prentice Ballinger. Mathilda's sister, Miss Olivia "Ollie" Grable, had been hired to become the private tutor of Ballinger's ten-year-old son, Sidney. Three months later, Miss Mathilda Gable was Mrs. Prentice Ballinger and her picture was plastered on all the newspapers in town. They had two children together, David and Patricia, but, before Patsy was even born, tragedy struck when Prentice Ballinger unexpectedly took his own life. A strange death planting the seeds for a string of murders two decades later.

During those twenty years, Mrs. Ballinger cultivated a public image as a high-rolling society woman, but she didn't exactly made herself beloved within her own family.

Mrs. Ballinger poured more than a million in her long-time toyboy, Jeffrey Linscott, but she hypocritically cut-off her son, Dave, without a penny when he found his own Cinderella in the sub-basement of the department store, Paula Maslach – a poor Polish girl. This condemned the young married couple to live in squalor in "a dingy cold-water flat" in "foreign quarter of the city" with a baby on the way. She let her stepson, Sidney, face ruination without parting with as much as a penny. Only her plucky daughter, Patsy, seems to have a grip on the family purse strings. So there are enough people around who would welcome an untimely passing when history began to repeat itself right down the last detail!

A very bored Spike Tracy, brother of the District Attorney of New York County, is lazying about in the office of Inspector Herschman, inquiring whether there were any ladies sliced up in trunks or babies in ashcans, when the inspector receives an urgent telephone call. A Dr. Horatio Pennypacker tells them to immediately get their ass to a large house on East 84th Street. Mrs. Ballinger was found shot to death in bed with a revolver clutched in her lifeless fingers, but Dr. Pennypacker has a lot to tell the homicide detective. And he "forcibly detained" the potential murderer in a locked room, James P. Worts. The lawyer of the now late Mrs. Ballinger. 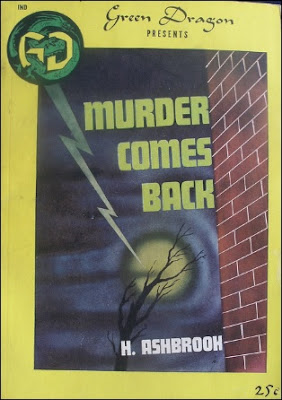 Dr. Pennypacker tells Spike and Herschman two very interesting things: 1) the apparent suicide of Mrs. Ballinger is carbon-copy of the supposed suicide of her husband, twenty years previously, which seems to have followed a script. The same gun had been used under identical circumstances. The same person found the bodies and the same doctor was called to the scene, Pennypacker. 2) Pennypacker believes the police were pressured into dropping their investigation into the death of Prentice Ballinger, because they never looked for an explanation as to who, or why, the whole bedroom was wiped clean of fingerprints. And he believes the person responsible for gumming the works was the lawyer.

A tantalizing premise, to say the least, with a plot delivering on its premise. An ultimately simplistic and satisfying plot complicated by an array of iron-clad alibis, lying suspects, blackmail, two crudely executed murders and, very briefly, an impossible disappearance was teased when a suspect vanishes from a house – which had been under observation by the police. However, this problem is presented and solved on the final page of Chapter X. Ashbrook also briefly toyed with an impossible crime idea in Murder Makes Murder, but she only pulled the trigger in The Murder of Sigurd Sharon with disappearance from house in which every exit was guarded by policemen.

Murder Comes Back is very much a traditional, Golden Age detective with a refreshingly original premise, but the plot has some unconventional bits and pieces that come mostly from the interaction between Spike and Patsy. Early in the story, Spike is advised to find a woman "who can dish it out" as well as he does and better.

Somewhat prophetic as he soon comes eye-to-eye with a human monkey-wrench, Patsy, in the office of Herschman. She waves a cigarette in Spike's direction and asks Herchsman "who's that and what do you call it?" Spike's attempt to tangle with Patsy proves to be more of an headache than tackling four murders and, with his judgment clouded, holds back a lot from Herschman. Something that'll bug his conscience throughout the story, but the payoff is amazing and accumulates in an unforgettable ending. I wonder if Ashbrook had been reading Maurice Leblanc at the time, because this is the kind of ending you would expect from an Arséne Lupin yarn.

Anyway, I hope Spike has the common sense to put a ring on Patsy and has his last outing, in The Purple Onion Mystery, be one of those humorous, lighthearted detective novels with a bantering, mystery-solving husband and wife teams in the spirit of Frances Crane and Kelley Roos.

A second, somewhat unconventional story element is an attempt to save someone's life through blood transfusion, which furnishes the plot with an interesting clue. A sort of clue you would expect from one of the scientific mystery writers of the time, but this only goes to show the versatility of Ashbrook as a plotter.

The plot here sticks nicely together and, if there's anything to complain about, it's that Ashbrook obviously took a basic idea from a previous novel and wrote an entirely new story around it. A very different story, but you can still make out the outlines of that previous novel and only serious downside to this is that it, kind of, foreshadows a part of the ending. Other than that, Murder Comes Back is another excellent mystery novel from a woefully underappreciated writer and a good way to ring in the New Year. A belated happy 2020 everyone! :)
Geplaatst door TomCat on 1/02/2020