The Honjin Murders (1946) by Seishi Yokomizo

Nearly a year ago, the eagerly anticipated translation of the second locked room novel by the doyen of the Japanese shin honkaku (neo-orthodox) movement, Soji Shimada, was finally released by Pushkin Vertigo and comments on my review of Naname yashiki no hanzai (Murder in the Crooked House, 1982) mentioned another, long-overdue translation was in the work – a translation of the award-winning debut of the giant of honkaku era, Seishi Yokomizo. Louise Heal Kawai is the translator of the Murder in the Crooked House and turned up in the comments to tell us we could expect Yokomizo's Honjin satsujin jiken (The Honjin Murders, 1946) by the end of 2019. Yes, the book was published early last month!

Unfortunately, my blogging schedule had already been filled up for December and had to queue my review until January. Now we're finally here and can tell you the book was well worth the wait! 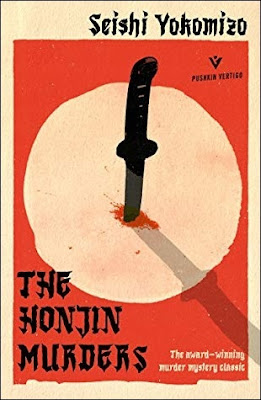 The Honjin Murders was originally serialized in Houseki magazine from April to December, 1946, before being published as a novel in 1947 (?) and netting the first-ever Mystery Writers of Japan Award in 1948. And to cement its reputation as a landmark of the Japanese mystery novel, the story marked the debut of Yokomizo's iconic series-detective, Kosuke Kindaichi! So let's break open this classic locked room novel that can be called the Japanese equivalent of John Dickson Carr's The Plague Court Murders (1934) and The Three Coffins (1935). Don't worry, that's not a spoiler. Just an acknowledgment Yokomizo succeeded in creating an imposing monument of the locked room mystery.

The facts in the case of The Honjin Murders are related a decade after "the whole ghastly deed" took place, back in 1937, by a nameless mystery novelist (Yokomizo?) who had been evacuated to a rural village in Okayama Prefecture at the height of the bombing raids – where the locals keep telling him about, what they call, "The Koto Murder Case" or "The Honjin Murder Case." The narrator immediately recognized that "this was no ordinary murder." A killer who concocted "a fiendish method" to strike at the heart of the Ichiyanagi family and vanished like a wisp of winter fog.

During the Edo Period, the Ichiyanagi home was a honjin, or a high-class inn, where "ordinary members of the public were not permitted to say" and were reserved as rest stations for traveling daimyo (nobility). But during the late 1800s, the head of the family anticipated the collapse of the feudal system and purchased farmland "dirt cheap," which made the family rich landowners in their new home village. Locals considered them outsiders, upstarts and kappa (water goblins), but there was still "honour associated" with being descendants of a honjin family in rural Japan of 1937. Over the years, the family slipped quietly into "a conservative, traditional lifestyle" until the oldest son of the family announced his engagement.

Kenzo is a quiet, studious man who fell prey to a respiratory disorder and had to give up his teaching position and return home where he shut himself away from the world to write books and articles, which made him "a well-known academic" and an unlikely husband – until he met a young schoolteacher, Katsuko Kubo. A decision that didn't go down with the family, who were united in their opposition, because pride in "distinguished ancestry" was still important in rural communities. And his bride-to-be was only the daughter of a fruit farmer. Eventually, the family had to admit defeat and a wedding date was picked.

Several days before the wedding, a strange looking, worn-down man arrived in the village. A three-fingered man with a crumpled hat, old shoes caked with dirt and a face-mask covering his mouth, nose and cheek scar – asking the way to the Ichiyanagi residence. A man whose phantom-like presence would loom largely over the tragedies that are about to unfold.

On the night of the wedding ceremony, the (drinking) party went on until two in the morning before the newly-weds retired to the annex building, but two hours later the household was roused by a blood-curdling scream followed by "the eerie strains" of "a koto being plucked with wild abandon." The koto is a Japanese string instrument and its strings are "traditionally plucked" by the thumb, index and middle fingers!

The annex was separated from the main house by a sprawling garden, a tall fence and a garden gate, bolted on the annex-side, which had to be hacked open and all the while they heard the eerie sound of a koto coming from the annex. What they found upon entering the garden is that "the cotton-wool snow was completely untouched" except for a katana sword stuck blade-first into snow near the base of a stone lantern. The doors and shutters were all closely secured and locked from the inside. So they had to force an entry and discovered the slashed bodies of the newly-weds. A closer investigation by the police uncovered how the murderer entered the annex and movement inside the annex, but how the murderer managed to procure an escape from a locked house encircled by unbroken snow and family members rattling the garden gate has them completely stumped. So the uncle of the bride, Ginzo, asks a brilliant young acquaintance of him, Kosuke Kindaichi, to come down to sort out the mess.

This is all merely a glimpse of the premise of this classic locked room novel, which doesn't take into account the various characters and myriad of clues found in-and around the annex house, but, in spite of its monumental appearance, the plot is surprisingly compact when compared to Yokomizo's masterpiece, Inugamike no ichizoku (The Inugami Clan, 1951) – focusing almost entirely on the murders in the annex house. The Honjin Murders is also a much shorter novel than The Inugami Clan. So the story, appropriately, has a more intimate feel to it. Since this is the first in the series, the reader is treated to fascinating mini-biography of the Kindaichi.

Kosuke Kindaichi entered popular Japanese culture as scruffy-looking youth of twenty-five garbed in an old, wrinkled hoari jacket, a faded kimono with a splash-pattern dye and worn-out geta clogs under a hakana skirt of wilted pleat. Kindaichi has the tendency to stammer and vigorously scratches his tousle-haired head when thinking, but despite his shocking indifference to his appearance, Kindaichi has the "relaxed, easy-going demeanour" of A.A. Milne's Anthony Gilbert (The Red House Mystery, 1922) that tended to disarm people. So non-Japanese readers who remember him from The Inugami Clan might be surprise to learn Kindaichi lived in San Francisco as a student, where he became "one of those lost, drug-addicted Japanese immigrants," but "a famous and quite bizarre murder" in the Japanese community proved to be his salvation. Kindaichi used nothing except reasoning and logic in "a focused attack on the case." And this is how he tackled the locked room slayings here.

A joyful highlight of Kindaichi's investigation is his delight at discovering a bookcase in the main house is crammed with detective novels, which not only have a part to play in the story, but the novels referred to by title shows whose footsteps Yokomizo wanted to follow. You have the previously mentioned The Plague Court Murders, Gaston Leroux's Le mystère de la chambre jaune (The Mystery of the Yellow Room, 1907), Maurice Leblanc's Les dents du tigre (The Teeth of the Tiger, 1921) Roger Scarlett's Murder Among the Angells (1932) and S.S. van Dine's The Kennel Murder Case (1933). But the promising titled chapter, "A Conversation about Detective Novels," failed to live up to it. So don't expect a Carr-style locked room lecture. However, these bookcase clues, or references, are always a joy to find in any kind of detective story.

The locked room-trick and overarching plot is delightfully tricky and complex, but still easy to visual imagine without the need for diagrams and floor plans. The kind of explanation you expect from a locked room mystery with a Grand Stature like The Honjin Murders. One element of the whole solution was a little too convenient to coincide with the murders, but, when it's as effectively used as it was here, it much more easily accepted. What really impressed me here was Yokomizo's unusual approach to the clueing.

Ho-Ling Wong noted in his 2011 review how The Honjin Murders feels "very much as meta-fiction." This is very much the case, but not merely for the references to other detective novels or the author gloating over his carefully chosen words. Yokomizo gave the readers all of the clues, red herrings and information in big chunks (clue-strewn crime scene) and expects the seasoned mystery reader to logically put all the parts together. You can compare it to an exam in which you have to understand the subject, instead of memorizing information, in order to answer all the questions correctly. For example, the locked room novels mentioned in the story function as a clue, of sorts, but knowing the answers to those mysteries will get you absolutely nowhere. You have to understand what makes their plot tick to extricate the relevant clue or hint. One of the novels mentioned is a particular good example of this.

Sadly, I either failed my exam or barely passed it. I had an idea how the locked room-trick could have been worked and who could have been behind it, but didn't reach the end with all the answers and had no idea how the three-fingered man fitted into the picture – which turned out to have a typical Japanese solution. So the conclusion, as the whole picture emerged, was immensely satisfying.

The Honjin Murders is the prodigious debut of a promising mystery writer that ushered in the honkaku era of traditional detective stories and deserving of its status as a classic of the Japanese locked room mystery. A highly recommend mystery novel that makes you wish more of Yokomiza was available in English.

Luckily, the translator, Louise Heal Kawai, left several comments on my review of Shimada's Murder in the Crooked House and a comment from early December confirmed Vertigo has plans to translate more from Yokomizo in the future! I'm keeping my fingers crossed for Gokumontou (Prison Gate Island, 1948), which Ho-Ling has called "the most respected Japanese mystery novel."
Geplaatst door TomCat on 1/08/2020