The Bloody Tower (1938) is the 32nd novel in the Dr. Lancelot Priestley series and has a plot fulfilling John Rhode's own requirements expected of a good detective story, "painstaking workmanship" and "accurate expression of fact," but the most attractive facet of the story is it was perhaps inspired by the work of his friend, John Dickson Carr – similar to how Rhode influenced Carr's The Man Who Could Not Shudder (1940). You can easily make out the contours of a Carr-like detective story when glancing at the skeletal structure of the plot. 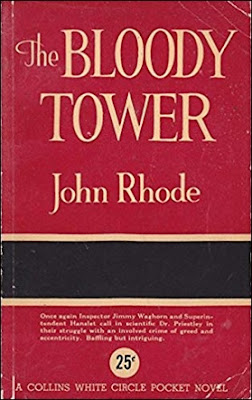 The Bloody Tower is set in the now gloomy surroundings of "the ruined grandeur" of the once splendiferous Farningcote estate.

Sometime in 18th century, Thaddeus Glapthorne constructed Farningcote Priory with the stones of a ruined monastery and erected  "a cylinder of masonry" on the highest point of his land. An inscription carved above the lintel of the iron door prophesying, "while this tower shall stand," so "long shall Glapthorne dwell in Farningcote." One of his less fortunate descendants has religiously clung to that promise.

Simeon Glapthorne is an elderly, invalid man who lives in the bare, but habitable, central block of the Georgian house with the now closed, disused wings lying in ruin – empty rooms, broken windows and missing tiles. Every piece of furniture and book in the house was sold until there was hardly "a stick left." A significant portion of the estate consists of unproductive woodlands, some wasteland known as the warren and Farningcote Farm is leased to a dairy farmer, Thomas Chudley. So what little money comes in "almost exactly balances" the interest on the mortgage.

You can say the place has lost some of its shine over the centuries, but the old, wheelchair-bound man clings to the place and lives there with his oldest son, Caleb. A frayed, shabbily dressed butler, Bill Horning, who has been with the family for over fifty years and his bibulous wife and cook, Mrs. Horning. A younger son, named Benjamin, refused to take part in the struggle against "inevitable ruin" and became an engineer aboard a steamship. Where he dreams of a life together with his first cousin, Joyce Blackbrook, in the engine room (gross). So there's no apparent reason to suspect anything, but a tragic accident, when Caleb's body is found in the warren with part of his face blown to pieces. A burst shotgun, or parts of it, were found lying next to the body.

Inspector Jimmy Waghorn, of the Criminal Investigation Department, happened to be in Lydenbridge and talking with Inspector Appleyard, of the local constabulary, when the apparent gun accident was reported – who invites Waghorn to come along. And they soon discover there's more to the exploding shotgun than a mere hunting accident.

As their investigation progressed, Waghorn decides to consult that "queer old stick," Dr. Lancelot Priestley, who has retired and spends his days stirring up "the very devil in scientific circles" with controversial articles and attempting to satisfy his "hunger for human problems." Something the police is more than willing to help feed, but, at this point of the series, Dr. Priestley has become an armchair oracle and leaves the practical detective work to Jimmy Waghorn and Superintendent Hanslet. So he only makes a couple of brief appearances before drawing his conclusions in the last chapter. 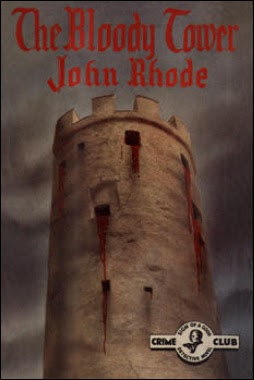 So you might expect the story to be one of Rhode's technical how-was-it-done stories, but, surprisingly, "the mechanism of the crime" is settled early on in the book with a visit to a local gunsmith. What we're given instead is a very clever and evenly paced whodunit with an ever better executed historical plot-thread, which revolves around a coded message left by Thaddeus Glapthorne in the family bible. A cipher linking bible verses to odd, hand-drawn shapes of balloons, crescent moons, circles and squares. If you put the book aside and take the time, you actually have a shot at decoding the message. Something I didn't do myself, but someone with a mind for codes and puzzles could do it. And how it related to the old, gloomy tower demonstrated why Rhode was the Engineer of Death! This excellently done plot-thread is also the reason why I tagged this review as historical mystery. It's really that good!

Technically, the who and the cleverly disguised motive were equally well done, but the observant, cynically-minded armchair detective will have no problem fishing both of them from the small pool of suspects – which weakened the partial false-solution following in the wake of an unexpected death. A character who I didn't expect to die in this Carrian detective novel.

I don't remember who exactly made this argument, but someone posited Rhode's primary weakness was his unwarranted expectation that his readers would take anything he told them on blind faith. But when we open a detective novel, we become a very suspicious and uncharitable lot who give the stink eye to even the most innocent looking characters or actions. This is what made the murderer and motive standout in The Bloody Tower.

Nonetheless, the easily spotted murderer and lack of a strong how-was-it-done type of killing, The Bloody Tower stands as one of Rhode's better and most readable detective novels. A sobering, realistic take on the atmospheric, Gothic-style mysteries of doomed families and old, long-lingering curses laced together with an ingenious historical plot-thread. I unhesitatingly recommend it to everyone and particular to readers who are new to Rhode. You might not get to know Dr. Priestley, but it shows, in more ways than one, what Rhode could do with the detective story.
Geplaatst door TomCat on 1/28/2020