Something Smells Fishy: "The Affair at the Circle T" (1946) by Clifford Knight 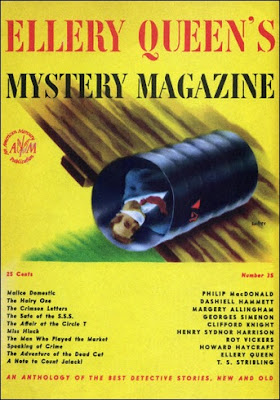 The Affair of the Scarlet Crab takes place during a scientific expedition en route to the Galapagos Islands, but the snail-like pacing, lack of excitement and a lackluster conclusion resulted in an average mystery novel at best. However, this was Knight's first crack at the detective story and debuts tend to be less than perfect. So I wanted to explore Knight's work further to see how he developed as a writer, eyeballing The Affair of the Limping Sailor (1942), when I struck a well of disheartening comments.

The Anthony Boucher Chronicles: Reviews and Commentary, 1942-47 (2009) has very little good to say about either Knight or his series-character, Professor Huntoon "Hunt" Rogers.

Anthony Boucher admitted in his reviews that Knight is excellent when it came to the local color of his novels, but has "an infallible formula" consisting of nothing more than Professor Rogers picking "a picturesque locale, calmly watch a series of murders committed under his nose" and after 60,000 words accuses someone "who obligingly confesses all" – as a rule his deductions are nothing more than "pure guesswork." Boucher remarked in his review of The Affair of the Dead Stranger (1944) that he only kept reading the series in the hope that some day a murderer will say, "OK, Hunt, now prove it."

So not exactly a glowing endorsement and an opinion backed by two genre-experts, Curt Evans and John Norris, who commented on my review of The Affair of the Scarlet Crab. John warned me that “the slow pace and lack of excitement are his unfortunate stock in trade” and Curt called one of his supposedly better novel, The Affair in Death Valley (1940), a “put-downable” read that took several days to finish. None of this was very encouraging, but, I reasoned, maybe the short story format was better suited for Knight's limited abilities as a plotter. Well, I'll say this, the problem with the pacing was solved... kind of.

"The Affair at the Circle T" was the first short story about Professor Huntoon Rogers and, believe it or not, was originally published in the October, 1946, issue of Ellery Queen's Mystery Magazine as a fourth prize winner of a short story competition – anthologized later that year in The Queen's Awards (1946). I find it amazing that a simple landscape writer and average plotter, like Knight, can rake in prizes while a talented, innovative writer and plotter, like Harriette Ashbrook, bathed in the shade of obscurity. 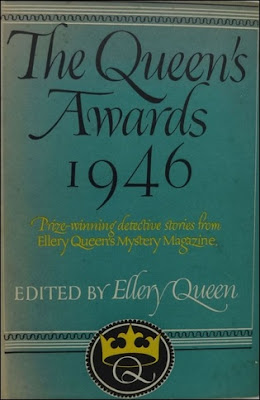 As you probably guessed by now, "The Affair at the Circle T" and the short story format did nothing to cover up Knight's short comings. If anything, it exposed them even more!

The story and plot "The Affair at the Circle T" is very simple and straightforward: Professor Huntoon Rogers is on a fishing holiday in the High Sierras and visits the owner of the Circle T ranch, Buck Chamblis, where a murder had taken place the previous day. Professor Rogers listens the lion's share of the story of what has happened before his well-timed arrival. A dame from New York, Mrs. Rolard, had come down to Nevada for six weeks in order to secure a divorce from her third husband. She had rented a cottage on the Circle T ranch.

Mrs. Rolard was the kind of woman "a normal man would just naturally want to cut her throat," but her soon-to-be ex-husband followed her to the dude ranch and she already found a new toyboy, which doesn't prevent them from eating and singing songs together – everything seems very amicable between the three of them. This situation abruptly ends when Mrs. Rolard is ruthlessly murdered in her cottage. Only tangible clue the police has is that the maid was shoved in the face outside the cottage, but it was dark and she couldn't make out who it was. However, she "smelled fish on the guy's hand." After listening to this story, Professor Rogers orders a reconstruction and (unfairly) deduces (being very generous here) a simple, uninspired solution hinging on an obscure piece of trivia.

I've to admit that there were two clues hinting at this solution, but, without knowing that piece of trivia, you can only make an educated guess. The waver-thin plot rests entirely on this "ha, gotcha!" revelation and the murderer obligingly confesses, but it has to be weakest piece of evidence for a solution I've ever come across in a detective story! There were two suspects with a "fishy odor" on their hands and Rogers never demonstrated why the other couldn't have done it, which alone is enough for reasonable doubt. There's no supporting evidence and the maid's testimony can probably be shaken in a courtroom, because in the story itself there was a hint of duplicity.

So, no, Knight's "The Affair at the Circle T" is not a good detective story in any shape or form and think he might have been better suited for the novel-length mystery after all, because the local flavor of his setting can paper over some of his short comings as a story-teller and plotter. I'm still going to read The Affair in Death Valley or The Affair of the Limping Sailor, but then I'll close the book on Clifford Knight and Professor Huntoon Rogers. Maybe...

Sorry to end this second review of the year on such a downer, but I'll try to do some quality control for my next read.
Geplaatst door TomCat on 1/05/2020