Last year, Martin Edward reported on his blog, Do You Write Under Your Own Name, that there were some exciting reprints forthcoming in the Crime Classics imprint of the British Library in 2020, which will include a pair of once obscure, long out-of-print locked room mysteries – namely John Bude's Death Knows No Calendar (1942) and Peter Shaffer's The Woman in the Wardrobe (1951). So, in anticipation of these impending reissues, I picked a British Library title from the highlands of my to-be-read pile. 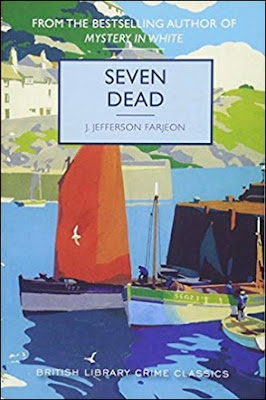 I've read less than a handful of J. Jefferson Farjeon's novels, but the superbly realized child narrator from Holiday Express (1935) and the gentle, snowy magic of Mystery in White (1937) indicated he was a less than conventional mystery novelist. Even the more traditionally presentable The Third Victim (1941) ended on an unconventional note with a solution hearkening back to the days of 19th century sensationalist fiction. And the only truly conservative aspect of Seven Dead (1939) is its continuation of that tradition.

Seven Dead has a strong, memorable opening with a hungry thief, named Ted Lyte, who's nervously graduating from "petty pilfering and pickpocketing" to housebreaking.

Lyte comes across a lonely place, Haven House, with an open gate, shuttered windows and half-dressed in dilapidated vines. So he grabs his courage together and finds a way into the house, where he helps himself to the silverware and food in the pantry, but, when he entered the shuttered room, he vacated the premise "as if he had been fired out of it from a cannon" – only to be apprehended outside. But the shocked man is unable to utter a word. When the police decides to inspect the burgled house, they make a horrifying discovery.

The shuttered drawing-room resembled a Chamber of Horrors with seven bodies strewn across the room, six men and one woman, who are "emaciated, filthily clothed" and "nothing on any of them to identify any one of them." As if they had gone through a Hellish ordeal. The shutters weren't merely bolted, they were nailed shut. A bullet hole disfigured a picture of a young girl hanging in the dining room and on the mantelpiece stands a slender silver vase with "an old cricket ball," green-yellow with age, on top. Most tantalizing clue is a crumpled piece of paper bearing the message "with apologies from the Suicide Club" and a cryptically penciled note scribbled on the other side of the paper.

One hell of a way to start a hard-to-define crime story! What follows is a two-pronged investigation by the protagonists, Detective Inspector Kendall and Tom Hazeldean.

Tom Hazeldean is a freelance reporter and yachtsman, who helped to apprehend Lyte, but his "romantic disposition" makes him want to meet the girl in the picture, Dora Fenner, who's the niece of the owner of Haven House, John Fenner – who has taken Dora to Boulogne. Hazeldean sets sail to France to find Dora and finds himself in the middle, what some have called, a romantic thriller with suspicious servants and silk merchant who seems to follow him around. Back in England, Detective Inspector Kendall conducts an investigation more in line with Freeman Wills Crofts as he reconstructs how, and why, the picture was fired upon, tracking down tire tracks and scrutinizing footprints. This is the only piece of genuine detective work in the story. 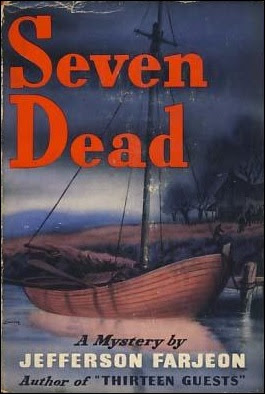 Just like Mystery in White, I think Seven Dead is too gentle to be a thriller (in spite of the body-count) and too light on detection to be a proper detective story, which you can only solve, if you happen to be a clairvoyant. And to a purist, like myself, that's an unpardonable sin. And then came that sublime ending! A conclusion that more than made up for any shortcomings the story has as either a detective or thriller story. If there's anything to complain about, it's that story has been told the wrong way round.

Seven Dead should have started out with that disastrous tragedy and expending those fascinating diary entries to fill the middle portion of the story, because who wouldn't want to read a detailed account of people battling an army of penguins? The last quarter should have told of the return to England, culminating in wholesale murder, ending with the discovery of the bodies and perhaps a newspaper clipping – reporting on the gruesome, inexplicable crime discovered at Haven House. I think this would have turned the story in a timeless classic and a lovely inversion of a famous detective novel published around the same time. Alas, the road not taken...

Farjeon was not your average, Golden Age mystery novelist, but a writer who spun fanciful yarns of wonder and imagination, which just so happen to take the shape and form of the detective and thriller story. Seven Dead is a fine example of how impossible it's to pigeon-hole Farjeon and his work. So he comes highly recommended to mystery readers who are looking for something a little different in their vintage crime fiction.

And if anyone from the British Library happens to stumble across this review, you should consider reprinting the splendid and highly original Holiday Express. If there's one obscure, long out-of-print novel by Farjeon deserving to be reprinted it's Holiday Express.
Geplaatst door TomCat on 1/13/2020