Policeman in Armour (1937) by Rupert Penny

E.B.C. Thornett was an English crossword expert and the author of nine densely plotted, jigsaw-like detective novels, published under the pennames of "Rupert Penny" and "Martin Tanner," which were almost completely forgotten in modern times – until they were brought back in print by Ramble House. Back in 2010, I decided to give Penny a try and, obviously, settled on Sealed Room Murder (1941). Unfortunately, the torturous, snail-like pace of the story wasn't exactly an open invitation to continue my exploration of Penny's Chief Inspector Beale series. 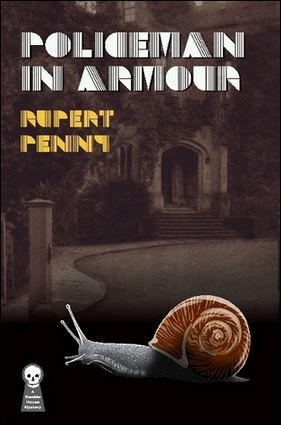 Sealed Room Murder has an audacious and original locked room-trick, but it was tucked away in the last quarter of the story and it was preceded by seemingly never-ending domestic quarrels between the characters. Something that became tedious and boring very quickly. I do believe Sealed Room Murder could have been pruned and whittled down to a classic short story or novella, comprising mostly of the last quarter, but, as it stood, it completely killed any desire to read the rest of the series.

Cue "JJ," of The Invisible Event, who has been raving about Penny since 2015. The cretin even had the gall to say (I quote) "the emergence of an unpublished penny novel" would be more exciting to him than "an unpublished work of John Dickson Carr." He actually said that... on a public forum!

You can say what you want about Mary Tudor, but she knew how to treat apostates and heretics, like JJ, which makes it fortunate for him that I'll be the one who'll be passing judgment on this occasion and always give someone a second hearing – such as Yazoburo Kanari and Clifford Knight. So I went over JJ's blog-post, "Policeman's Lot – Ranking the Edward Beale Novels of Rupert Penny," and decided on the novel he called "Penny at his most presentable." Was he right? Let's find out!

Policeman in Armour (1937) is the third novel in the Chief Inspector Edward Beale series and embarks a month after Albert Carew is sentenced to five years of penal servitude for forgery.

Carew "kicked up no end of a fuss when the verdict was brought in" and wrote a threatening letter to the judge who presided over the case, Sir Raymond Everett, stating that "Hell is the only place for people who take five years off a man's life for what he didn't do." Closing the letter with the promise that the judge certainly hasn't more than five years left to live. Sixteen months later, a deathbed confession released Carew from prison with "a lot of apologies" and a financial compensation, but he had not forgotten about the man who put him behind bars.

Justice Everett, of the King's Bench Division, suffered a severe heart attack after the sentence and was forced to retire to his mansion, Heath Approach, where lived with his relatives and has filled a private room with a collection of knives – resembling "a war museum." An aspect that remained underdeveloped in the story, but something I thought was worth mentioning since Penny so closely aligned himself with writers of the Van Dine-Queen School like Anthony Abbot, Clyde B. Clason and Roger Scarlett.

Chief Inspector Beale is consulted by Justice Everett, now "a plain private citizen" with "a very weak heart," on a very peculiar threat he received from Carew. A letter arrived advising the ex-judge to start doing "a few good actions," because Carew was going to make up a balance of his life and pass judgment. And the letter is filled with details only known to his household. Several months later, Chief Inspector is called back to Heath Approach to investigate the murder of the retired judge. 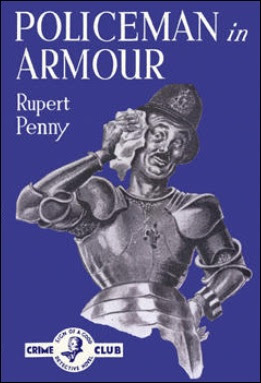 Before he was murdered, Sir Raymond Everett has suffered a second heart attack and was put to bed, sedated with morphia, but was found later in the evening with the bone-handle of a nine-inch knife sticking from his back.

Some of my fellow mystery bloggers, like JJ and SaHR, have labeled this murder as a locked room mystery, which is not only incorrect, but it sells short what Penny tried to do here. Beale observed that "nobody could have done the murder," but, as the explanation shows, the crime-scene was hardly a locked room under close, unwavering observation. There were several ways in, and out, of the bedroom. However, these entrances and exits resembled an obstacle course, or maze, comprising of latched windows, a door with a noisy lock, an occupied dressing-room and ticking clocks – through which the murderer had plotted a route. Beale had to find this way to get in, and out, of the room without being seen or heard. Something very different, but just as intriguing, as a good, old-fashioned locked room puzzle.

Penny wisely decided to keep the pool of potential murderer's as small as possible and placed only a handful of people inside the house at the time of the murder. There's the victim's greedy, unlikable daughter and son-in-law, Mildred and Richard Dyson. A spinster daughter and qualified nurse, Sybil Everett, who has been taking care of her father since his first heart attack. The victim's niece and someone Beale believes to be entirely innocent, Evelyn Stoddert, and his physician, Dr. Malcolm Rider. And then there's always the outside possibility, Carew.

Beale methodically tries to find a way out of this maze-like problem, littered with such clues as "a squashed snail," a packet of taunting letters and a fatal assumption on the murderer's part, which even the most observant reader is likely to miss or overlook – until its spelled out during the denouement. This is indeed makes for a very densely, sometimes slowly moving, but a solid, plot-driven, detective novel. Penny shared most of clues fairly with the reader, because, as the Challenge to the Reader states, there's "not much point in setting a problem that nobody can solve except the setter and his puppets." My only complaint is that the motive of the murderer is only foreshadowed. This prevents the reader from comfortably settling on the murderer, because you're never quite sure about the motivation of this person. I also thought the nature of the motive was a little out of place in, what had been up to that point, a purely an intellectual game between author and reader.

Nevertheless, the plot is undeniable a piece of old-world craftsmanship and it didn't bother me there were conveniently converging plot-threads that complicated the overall scheme, because Penny handled them with care and skill. A plot that could have easily become a mess. You can easily envision the solution and follow along with Beale's explanation, but, more importantly, the murderer's pathway into the bedroom and another, well-hidden alibi-trick were (for me) the absolute highlights of a clever, complicated, but satisfying, detective story. Recommended to everyone who prefers a big hunk of meat on their plots!

So, all in all, I think it's safe to say Penny has redeemed himself with Policeman in Armour and will resume my exploration of Chief Inspector Beale's casebook later this year, but, while JJ was right on this occasion, he's not off the hook yet. He still has a strike against for him that last manuscript comment.
Geplaatst door TomCat on 1/06/2020