The Last Warning (1962) by Gerald Verner

Gerald Verner's The Last Warning (1962) is the fourteenth title in the Detective-Superintendent Robert Budd series and is, particular compared to They Walk in Darkness (1947), the shortest novel I've read by Verner to date – practically a novella. I begin to believe that the Superintendent Budd novels were written according to a formula. 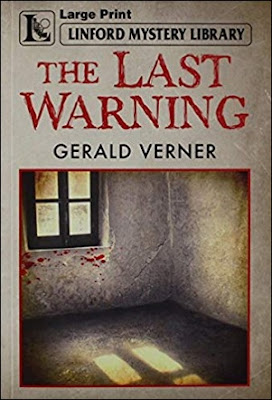 I've previously read the novella "The Beard of the Prophet" (1937) and The Royal Flush Murders (1948), which have very similar premises with men under a deadly threat in their own home and a police presence unable to prevent murder from happening. One of the murders is committed under seemingly impossible circumstances in a locked room closely guarded by policemen. The plot of The Last Warning follows the same pattern.

The Last Warning opens on a Friday evening, the 13th of November, when the assiduous, ill-tempered and unlikable Mr. Criller returns home to find the capital 'S' scrawled in red chalk on his gate. A greatly annoyed Criller assumes it was done by some of the unruly village boys, because he's not exactly popular in Thatchford. But this incident comes back to haunt him the next day.

Criller lives with his servants and an adopted niece, Grace Hatton, who acts as "a kind of unofficial secretary" to her uncle and, in return, she receives food, shelter and "a microscopic dress allowance" – making some people wonder why she put up with her "impossible life." A sub-plot that deserved better treatment. One of those people is her neighbor, Jim Langdon, who lives with his mother at Yule Lodge and wants to marry Grace. Naturally, Criller wants to hear nothing about it ("I'll not have any philandering, understand that").

Twenty years ago, Criller made "a nice packet" of money in a mysterious, underhanded scheme with two confederates, Franklin Brinn and Sir Benjamin Gottleib. A scheme not so subtly alluded to during a business meeting between Criller and Brinn, but details are kept as sketchy as possible at this early juncture in the story. When the meeting ends, Brinn strolls into the garden to smoke a cigar, but never returns. Grace is ordered to go look for him and finds his body in the summer-house. A rough letter 'S' was drawn in blood on the garden table!

The stout, deceptively sleepy-eyed Detective-Superintendent Robert Budd happened to be in the neighborhood on an unrelated case and had been talking with an old friend, Superintendent Hawkins, when he got news of the murder – coming on the tail of telling Budd that they "don't get much excitement" in Thatchford. So he tags along and they soon discover that the two remaining men are in mortal danger. 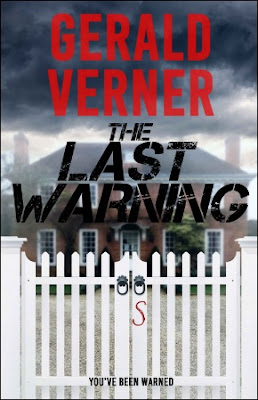 A threatening letter tells Criller that he'll be next and Gottleib receives a similar worded death threat announcing "tomorrow night at twelve you will die too."

They decide to spend the night at Criller's house. Gottleib is placed in a room with two police constables patrolling the ground beneath the window, which are securely fastened and bolted on the inside. Budd and Hawkins will be in sight of the locked door the entire time. Only thing Gottleib has to do is call out "all right" at regular intervals, but, when the clock had chimed twelve, everything remained silent behind the locked door and there's no response to their knocking – which made them decide to break down the door. What they find is Gottleib, slumped in a desk-chair, with "a small round hole in the center of his forehead" and "the hot-iron smell of burnt cordite" still lingering in the air.

A pretty solid premise for an impossible crime, but the locked room-trick employed here has been done before. A trick not as well known to mystery readers who aren't also wholesale consumers of impossible crime fiction, but I've come across numerous examples and variations on this idea, which was kind of old hat by the time The Last Warning was published. That being said, this trick is still better and less disappointing than secret passages, keys being turned with pliers or pieces of string, duplicate keys or keys being reintroduced to the room after the door was broken down.

My real problem with the impossible shooting is how it destroyed any shred of doubt I had about the murderer's identity. I already had this person tagged as my number one suspect, but there was another character, suspiciously hidden the background, who presented a possibility. Unfortunately, this was not the case and story became blatantly obvious and, as short as it was, a tedious right after the murder in the locked room. There's was an interesting little game of musical chairs with false identities and wills towards the end of the story, but this came too late to help prop up the weak solution.

So, while The Last Warning had a good premise and some interesting ideas, the plot failed to deliver the goods in the end and has convinced me Verner is not a writer you need to look to for good locked room mysteries. Luckily, Verner's Noose for a Lady (1952) and Sorcerer's House (1956) demonstrated he could be an excellent, second-string mystery writer without having too lean on an impossible crime. I found a promising, non-impossible crime, title that looks promising with a plot and setting reminiscent of John Russell Fearn. But that's a detective story for 2020.
Geplaatst door TomCat on 12/22/2019