In my previous post, I reviewed John R.S. Pringle's The Royal Flush Murders (1948), published as by "Gerald Verner," which ended with the promise to immediately return to the work of this obscure, pulp-like mystery writer with, reputedly, one of his best detective novels – namely the intriguing-sounding Sorcerer's House (1956). A detective story clearly intended as a homage to the great maestro, John Dickson Carr, but without leaning on an impossible crime. Nearly everything else is pure Carr! 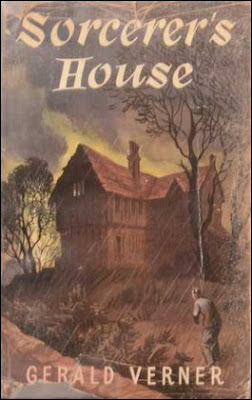 One of the primary characters of Sorcerer's House is a young American, Alan Boyce, who's on holiday in England and is staying with a long-standing friend of his father, Henry Onslow-White, in the charming village of Ferncross. On the day of his arrival, Boyce learns of the abandoned, decaying and haunted Threshold House. A house long forgotten by the world, but the villagers remember the time when it was used as "a kind of wizard's den" by one of history's most peculiar characters, Count Alessandro di Cagliostro.

Cagliostro was a self-professed magician, occultist, alchemist and very likely a died-in-the-wool conman.

During his second and last time in England, Cagliostro had rented Threshold House where, if local legends are to believed, he attempted to replicate his famous Banquet of the Dead in the Long Room – which has been haunted every since by "a dim, bluish glow." A mysterious light that is seen as "a sign that somebody is going to die." Violently! In recent years, the bluish light in the window preceded a deadly motor cycle accident in the village and the discovery of dead, unidentified tramp underneath the window of the Long Room.

Boyce learns of this local legend in the garden of Bryony Cottage, home of Mr. and Mrs. Onslow-White, where a group of people are sitting around in deck-chairs on a hot, airless summer evening. These people are Avril Farrell and her brother, Dr. Farrell, who's accompanied by his daughter, Flake. She naturally becomes somewhat of a love-interest to Boyce. Paul Meriton rounds out the party. The plot begins to roll when Avril Farrell makes the disturbing remarks, "there was a light in the window last night" and "I wonder who is going to die this time?"

That night, Boyce looks out of his bedroom window, overlooking the old, ruined and ivy smothered house, and sees a light in the window of the Long Room. So he decides to investigate and makes a terrible discovery. The body of Meriton lies underneath the window of the Long Room, exactly like the dead tramp, with the back of his head caved in and turns out he had been killed with "a loose banister torn from the staircase" – after which he had been pitched out of the window. So this is murder. And this brings one of Verner's short-lived series-detective onto the scene.

Simon Gale is a flamboyant, beer guzzling artist-of-leisure and an incorrigible contrarian with an unruly shock of hair, aggressive beard and the dress sense of a Dutch flower field. He smokes vile, acrid smelling cigarettes rolled from black tobacco and booms such phrases as "by the orgies of Bacchus" or "by the cloven hoofs of Pan." Gale is unmistakable meant to be a Great Detective in the tradition of Carr's Dr. Gideon Fell and Sir Henry Merrivale, but many readers will probably find his mannerisms tiresome. And this probably makes him more of brand-store version of Dr. Fell and H.M. Still, I didn't entirely dislike him, but he can be tedious at times. Lee Sheldon created a very similar, but more convincing, JDC-inspired detective in Impossible Bliss (2001). Anyway, the most obvious nod to Carr had yet to come. 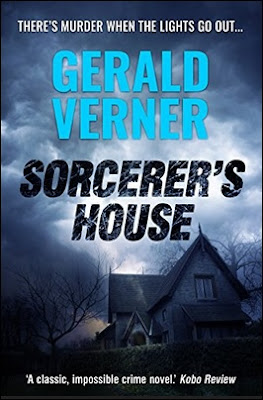 A key-part of the overarching plot is finding out what exactly happened to Meriton's wife, Fay Meriton, who apparently absconded with a secretive lover, but nobody has ever been able to find a trace of her. Gale is convinced there's more to her sudden disappearance and believes he'll find the answer in the decaying house. This is the point where the story becomes tricky to discuss, but Fay's back-story is directly tied to the dark and hidden tragedies of the house. However, it's not exactly what you think it is. Gale was even surprised by two of their discoveries, but, slowly, Fay emerges as a tragic and wronged woman. You can say what you want, but this largely mirrors the story of Fay Seton from Carr's classic He Who Whispers (1946).

As I mentioned above, Sorcerer's House becomes tricky, if not impossible, to discuss once they begin to explore the house in earnest, because the story is almost structured like a magazine serial and the discoveries are excellently used here as cliffhangers – baffling everyone from reader to the detective. These are some of the best set-pieces of the story and the closes Verner came to matching Carr when it came to story-telling. Verner also deserves praise for showing the excitement and gossip in Ferncross when the police and press descended on the small village. A particular highlight was the character of the village gossip, Miss Flappit, who was in "a seventh heaven of excitement" and shot all over the village like "a noisy and virulent wasp."

Plot-wise, Sorcerer's House only suffers from ramshackle clueing and an otherwise excellent, well-hidden murderer who falls for an obvious trap set by Gale, but most readers will probably forgive that last point. Because you'll get one of those great, Carr-like scenes in return. A genuine surprise played to great effect, but again, the murderer was acting as an idiot here and should not have fallen for it.

Leaving aside these imperfections, Sorcerer's House is a superior and more original detective story than either The Beard of the Prophet (1937) or The Royal Flush Murders. The former borrowed a little too freely from Agatha Christie's Murder in Mesopotamia (1936), while the plot of the latter was pretty much a pastiche of S.S. van Dine's The Greene Murder Case (1928). Yes, Sorcerer's House evidently drew inspiration from He Who Whispers, but most of the plot is entirely original. In some ways, you can even say the plot of Sorcerer's House anticipates Paul Halter's La chambre du fou (The Madman's Room, 1990). So maybe Brad and JJ want to take note of this one.

Long story short, Sorcerer's House is a good, second-string mystery comparable to the more Carr-like mystery novels by John Russell Fearn (e.g. The Five Matchboxes, 1948), but, above all, it's a much appreciated homage to the master with patches of truly great story-telling. So this one has definitely given me a reason to return to Verner in the future.
Geplaatst door TomCat on 6/28/2019