Ruthven Campbell Todd was a Scottish artist, novelist, poet and "leading authority on the printing techniques of William Blake," but towards the end of the Second World War, he was advised by fellow poet and mystery writer, "Nicholas Blake," to turn to the detective story as "a means of making money" – cautioning him to use a penname in order to avoid "ruining his name." So he rearranged his own name and came up with the nom-de-plume of "R.T. Campbell." 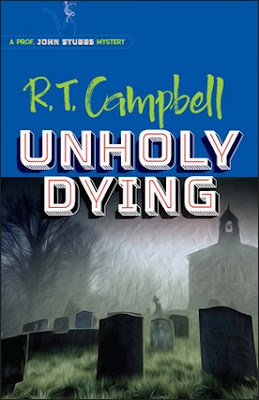 Under this name, Campbell rapidly produced eight detective novels, nearly all of them published in 1946, seven of which feature his botanist-cum-amateur detective, Professor John Stubbs. A wonderful character cut from the same cloth as Carter Dickson's Sir Henry Merrivale and Leo Bruce's Sgt. Beef. With a hint of John Dickson Carr's Dr. Gideon Fell.

Professor John Stubbs is described as a corpulent, "shortsighted baby elephant" with a booming voice, who blows and wheezes through a frayed mustache, while wiping his glasses or blowing his nose with a large red bandana and smokes "a pipe filled with evil-smelling tobacco" – in between draining a quart mug of beer. Frighteningly, Stubbs is entangled in a never-ending struggle to tame his dangerous, hulking Bentley, of an "extremely uncertain age," by "driving as fast as he can" and "braking just in time to avoid disaster." Very much to the horror of his terrified passengers.

Just for the character of Professor Stubbs alone, I can recommend this series to fans of Bruce, Carr and the comedic mysteries by Edmund Crispin.

During the late 2000s, I read the Dover reprint from the eighties of Bodies in a Bookshop (1946), but Campbell immediately disappeared from my radar again, because his detective novels have the unbecoming habit of being "distinctly rare." Last year, John Norris, of Pretty Sinister Books, posted "Best Vintage Mystery Reprint of 2018" reminding everyone Dover has recently reissued four Professor Stubbs mysteries, which come with an insightful introduction by Peter Main. John recommended Death for Madame (1946), but opted for Unholy Dying (1945) instead. The first book in this lamentably short-lived series.

Before delving into that story, I have to tell you about Campbell's "Lost Detective Novels," five in total, which were announced by his publisher as forthcoming, but the company "went into liquidation" in 1948 and the books were lost to history – because no copies have ever turned up or appeared in "any specialized bookseller's list." The book-titles of these lost mysteries are The Hungry Worms Are Waiting, No Man Lives Forever, Death is Not Particular, Death is Our Physician and Mr. Death's Blue-Eyed Boy. The knowledge that there's a Phantom Library of lost and unpublished detective stories will never stop to fascinate and frustrate me in equal measures.

Unholy Dying is told by Andrew Blake, a reporter for the Daily Courier, who has been assigned to report the eighteenth Congress of Geneticists and one of the many attendees is his uncle, Professor Stubbs. So it should be a fairly easy job, but Blake notices an undercurrent of tension around a small group of people among the two-thousand attendees. And even becomes involved in the problems of this group. 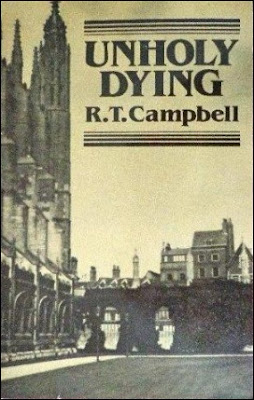 The source of tension is a supposedly brilliant geneticist, Dr. Ian Porter, who got "a great deal of pleasure out of the fact that people disliked him" and "climbin' to fame on the shoulders of others," but, during the congress, he's also a bit too pressing (physically) with a female attendee, Mary Lewis – angering her love-interest, Dr. Peter Hatton. Professor Maxwell Silver is supposed to be one of the victim's of Porter's scientific thievery, but doesn't appear to really care. And even the only one who somewhat likes Porter. Or does he? Dr. Herman Swartz remembers Porter from his days in the U.S. and highly approves of Blake boxing his ears during a party at the local pub. Porter gets his lights knocked out a second time by Hatton in the demonstration room. And there his body found a short while later with a glass of cyanide standing on the table.

Professor Stubbs has been reading detective stories for donkey's years and he's even seen reading a novel by John Dickson Carr in this story (probably Till Death Do Us Part, 1944), which makes him somewhat of an expert on the topic of murders done in a locked room and murderers with cast-iron alibis. However, this murder is "the exact opposite of the closed box mystery." Porter had been alone in a room to which roughly two-thousand people had free access, but Stubbs has been waiting for years to play detective and he wasn't going to let this opportunity slip through his fingers. Even if the "murderer is not a very original person." Campbell and Professor Stubbs definitely have a touch of Bruce and Sgt. Beef!

So, he takes his first, tentative steps on the path of becoming a Great Detective and he does it with all the grace and subtlety of a stampeding elephant, which range from compiling a list of all the suspects with possible motives, opportunities and alibis ("common to many of the best detective stories") to muttering cryptic remarks about knowing who the murderer is – giving veiled hints to the works of Shakespeare and the Famous Trails Series. There is, however, a drawback to the plot.

Unholy Dying seriously lacked credible suspects, only four, which made the murderer standout like a sore thumb and deflated the ending, but it made the spotty clueing a little less obvious. However, I think the plot, as a whole, would have worked better had it been worked into a short story.

That being said, Unholy Dying stands as a promising debut novel from a writer who reads Carr, but took his cues from such comedic mystery writers as Bruce and Crispin, which made for a highly readable and funny detective story – full of banter and sly winks at the genre. So I can only recommend it to seasoned mystery readers.
Geplaatst door TomCat on 6/07/2019