Back in June, I looked at the second detective novel from the short-lived Simon Gale series, entitled Sorcerer's House (1956), which Gerald Verner unmistakably intended as an homage to one of John Dickson Carr's most celebrated mystery novels, He Who Whispers (1946) – without becoming too derivative or having to lean on a locked room gimmick. Surprisingly, the book actually succeeded in being an obvious tribute that told its own story and that piqued my curiosity about the first title in the series. A mystery novel that has consistently been compared to the work of Agatha Christie. 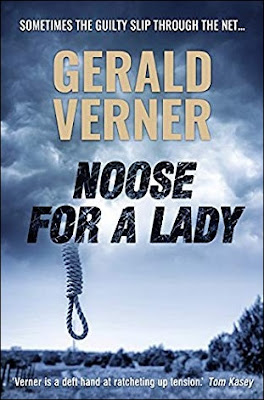 John Norris, of Pretty Sinister Books, left a comment on my review of Sorcerer's House saying Noose for a Lady (1952) is "very much like a Christie novel" just as Sorcerer's House is "like Carr." I agree. Personally, the book reminded me of Christie's Sad Cypress (1940) and Ordeal by Innocence (1958) with a hint of Cards on the Table (1936).

Noose for a Lady opens with the conclusion of the trial of Margaret Hallam, who has been found guilty of the murder, by poison, of her husband, John Hallam.

John Hallam died at his home, Easton Knoll, from "an overdose of barbitone" administered in a glass of hot whiskey and milk. A mixture prepared by Mrs. Hallam. There were only two set of fingerprints found on the glass, which belonged to Mr. and Mrs. Hallam, but, even more damning, is that she had been taking a preparation of barbitone for insomnia and kept her supply in a locked drawer in her bedroom – she kept the key in her purse. Two days before the murder, Mrs. Hallam had bought a new bottle containing "containing twenty-five five-grain tablets," but the police only found three tablets in the bottle. Mrs. Hallam was unable to account for the missing tablets.

So the jury returns with a unanimous guilty verdict and the judge, who gets the square of black silk draped over his wig, announces that Mrs. Hallam will be "taken from this place to a lawful prison" and "thence to a place of execution" where she'll be "hanged by the neck until you are dead." Mrs. Hallam continues to proclaim her innocence, but the only person who believes her is her stepdaughter, Jill Hallam.

Jill Hallam last hope is enlisting a childhood friend of her stepmother, Simon Gale, who recently returned from Italy and has read "one of the scurrilous rags" for the past eight months. So, when he learns her execution is scheduled to place within a week, Gale thunders "do you mean these blundering, incompetent numskulls are going to hang her?" and is determined to reverse the verdict before that seven day time-limit. But his approach and even personality noticeably differed from his second appearance.

Sorcerer's House was written as a homage to Carr and called Gale in my review a store-brand Dr. Gideon Fell or Sir Henry Merrivale, because he constantly smoked vile, acrid smelling cigarettes rolled from black tobacco and booms odd, classically inspired phrases – such as "by the golden apples of Hesperides" and "by the cloven hoofs of Pan." These Carr-like personality traits were entirely absent here. Gale still has a loud, boorish personality, but now he stands much closer to either Hercule Poirot or Miss Marple than to Dr. Fell or H.M. A detective who hunts for psychological clues in the personalities of the suspects.

Gale is a professional portrait painter and admitted he knew nothing about "as cigar ash, fingerprints, alibis, and tangible clues of that kind," but knew Mrs. Hallam didn't poison her husband because it was "psychologically wrong." Mrs. Hallam has an infernal temper and she would have used a poker or bread-knife, but not poisoning his nightcap with a dose of sleeping pills. So he descends on the village of Wickham Green to find out who, of its inhabitants, fits the psychological profile of "one of the most dangerous types of murderer," the sly poisoner. 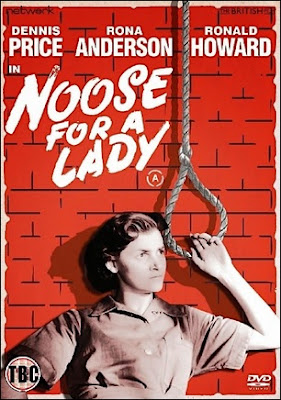 This proves to be somewhat of a Herculean task. Not only have they less than a week to find this unknown murderer, but the victim, John Hallam, is revealed as "a mental sadist." Someone who liked to find out people's dirty secrets and torture them, privately, with the threat of exposure and there were quite a few people in the village who were caught in his torturous web. There's a malicious village gossip, Mrs. Ginch, who poses as a pious church lady. A collector of some exquisite pieces of china, Robert Upcott, whose spirit was broken when his wife ran away with another man. An ex-military man, Major Fergusson, who has seen things in the war that keeps him awake at night. A tartar of a woman, Mrs. Langdon-Humphreys, who's always accompanied by her niece, Vanessa Lane. Lastly, there the typical country physician, Doctor Evershed, who's the only one in the village that has threatened Mrs. Ginch with lawsuit for the lies she told behind his back.

Noose for a Lady largely comprises of ferreting the long-held secrets from this closed-circle of suspects, but they're incredibly reticent and Gale compared his task to turning on "a bright light in an old, damp cellar" as "all kinds of nasty, crawling things go scuttling away to their holes" – in order "to get out of the glare." All the while, the clock is rapidly ticking away the days that Mrs. Hallam has left to live.

So I can understand why the story has been described as an Agatha Christie-style novel and Verner took many of his cues directly from some of her detective stories. I already mentioned Sad Cypress and Cards of the Table, but one piece of psychological clueing tore a page directly from Christie's widely praised masterpiece, Death on the Nile (1937). However, the ending betrayed the fact that Verner was not quite in the same league as Christie.

John Norris wrote in his blog-post, entitled "Neglected Detectives – Simon Gale," that "the ending is histrionic in the extreme" with too much "explained away as madness" and made "the entire story seem prosperous." Santosh Iyer was a lot nicer, but his one complaint was "the unnecessary melodrama at the end." I mostly agree with them, but the reason why melodramatic ending didn't work, in my opinion anyway, is the vulgar motive to get rid of John and Margeret Hallam. A more personal and emotional motivation would have made the ending more acceptable. An incident was mentioned that could have been turned into a motive that, psychologically, fitted the murderer.

So, in spite of the slightly botched ending, Noose for a Lady is a well-done, much appreciated attempt at a classic, cleverly-done whodunit, a la Christie, which made for an exciting and intriguing detective story, but Christie would have handled the surprise ending so much better. Just compare Noose for a Lady to Peril at End House (1932) and Lord Edgware Dies (1933), you can't help but to appreciate her lesser-celebrated novels all over again. However, it isn't really fair to compare Verner to Christie and, by his own standards, Noose for a Lady is as good a second-string mystery as Sorcerer's House. Purely recommended for readers who either want to read something like Christie or readers who love obscure detective stories.

A note for the curious: Noose for a Lady began as a radio-play and was adapted in 1953 for the movies. You can watch the trailer here.
Geplaatst door TomCat on 11/29/2019