Leo Wollenborg Jr. was the son of a German-born Italian economist and a journalist, who moved to the United States in response to the introduction of the leggi razziali (racial laws) in 1938, but he left behind, what some have called, one of the most beautifully imagined Italian locked room mysteries, Il mistero dell'idrovolante (The Flying Boat Mystery, 1935) – published as by "Franco Vailati." So it was only a matter of time before The Flying Boat Mystery appeared on the radar of John Pugmire's Locked Room International. 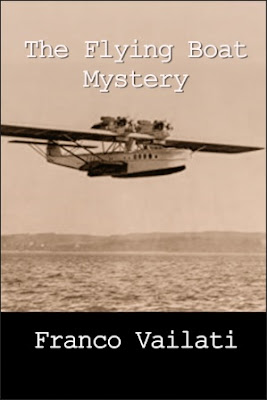 The Flying Boat Mystery opens on the surface of the water basins of Ostia Airport, near Rome, where a flying boat is ready to depart for Palermo.

The passenger list comprises of three country tradesmen, Giuseppi Sabelli, Giovanni Marchetti and Pagelli-Bertieri. A middle-class, middle-aged couple, Augusto and Maria Martelli. A fascinating lady dressed in red, named Vanna Sandrelli, who carries "a lizard-green bag" which clashes horrendously with her clothes. Somewhat of a crime in Italy, I imagine. A plucky journalist of the La Gazzetta, Giorgio Vallesi, who only had eyes for another female passenger, Marcella Arteni. The last passenger of the list was supposed to be an Italian-born Greek banker, Francesco Agliati, but a bank-teller, Larini, arrived when the plane was full and ready to go – which forced him to part with a packet of lire to get the mechanics seat in the cockpit. And the mechanic traveled, cushioned with money, in the luggage compartment.

So this was suppose to be a routine, ninety-minutes flight from Ostia to Naples, but, during the flight, Agliati "decided suddenly to retire his large, bulky figure into the small toilet." Agliati never returned to his seat nor did he respond to repeated calls and knocking.

When the flying boat landed, the door was broken down and, to everyone's surprise, the small toilet was completely empty! The door had been locked on the inside and the only possible exit is a small skylight in the roof of the toilet, but its dimensions makes it absurdly impossible for the large, bulky man to have passed through and what reason could he have had for such "an absurd acrobatic exploit" in mid-flight? This eliminates the options of accident, suicide and murder. So what happened?

Vice Questore (Assistant Commissioner) Luigi Renzi reads in the newspaper that his old college friend, Giorgio Vallesi, was on board of the hydroplane when the banker inexplicably vanished and decides to insert himself into the investigation, but the impossible disappearance is swathed in complications – such as finding out everyone's reason for traveling on that plane. And, as to be expected, every single one of them is holding something back from the investigators. But that's not all. 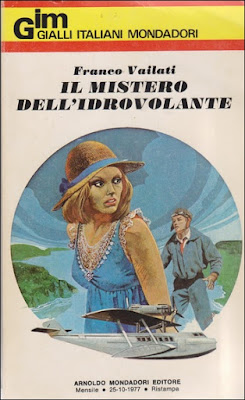 A second, more grisly, problem presents itself when the head and arms of a person, who was on that miraculous plane ride, are found crammed in a suitcase that was left in a train compartment. This adds a complex little puzzle involving a dismembered corpse and suitcases with mysterious numbers written on the inside. Why not? Why settle on just an impossible disappearance from a locked toilet in mid-flight, when you can throw a little corpse-puzzle in the mix. However, the locked room problem, premise and solution, is the high point of the plot.

I figured out an essential part of the vanishing-trick, but only because the locked room situation resembled, in some ways, a unique aspect of a short story that was written in the past twenty-five years. I doubt the writer in question was aware of this Italian mystery novel, but found it interesting to see how they found two very different applications for exactly the same idea. What makes The Flying Boat Mystery such a joy is that Franco Vailati didn't stop there.

Once you figured out the basic principle behind the trick, the problem is still far from solved and you can even say that it becomes more complicated. Vailati showed the craftsmanship of a Golden Age writer with a beautifully done, partially false-solution to explain the second part of the vanishing-trick before Renzi shows the reader what really happened with a simple diagram – destroying a well-hidden alibi in the process. What a shame this was Vailati's only detective novel!

The Flying Boat Mystery was translated by Igor Longo and he wrote an article, "The Italian Mystery Novel," that ended the book and some parts hit a little close to home. Longo mentions that one of the reasons why the traditional detective story is in such a poor state, in Italy, was "the disapproving eye of dons, newspaper critics and other Arbiter Elegantiarum" unduly "praising the tosh written by their own pets" and "the locked room murder was laughed about" – used "only for epitomizing what the "good writer" was called to destroy." You can unfortunately say the same of my country. Where even the traditional detective fiction that had been written have rarely, if ever, been reprinted and have pretty much been forgotten about today or have even become lost altogether.

And to make it even more painful, Longo goes over a whole list of notable Italian writers of traditional detective stories and locked room mysteries! Most of them untranslated! I've a feeling JJ will lose his goddamn mind when he learns there's "a sort of minor Italian Rupert Penny" who's entirely out of his reach. Pugmire really has to make these Italian mystery writers part of the LRI family.

So, all in all, The Flying Boat Mystery is a very short, but fun, novel with a busy plot, good setting, an original vanishing-trick and an interesting use of the partially false-solution, which should satisfy the fanatical locked room reader.
Geplaatst door TomCat on 11/14/2019