Back in February, I reviewed a Dutch short story, Anne van Doorn's "De bus die de mist inging" ("The Bus That Went Into the Fog," 2018), in which a shady American is inexplicably strangled aboard a regio bus (regional bus) on a cold, foggy winter day in February – because neither the passengers or the bus driver heard or saw the murder happen! Ninety years ago, Brian Flynn wrote a detective novel with a similar premise, but with an entirely different explanation. 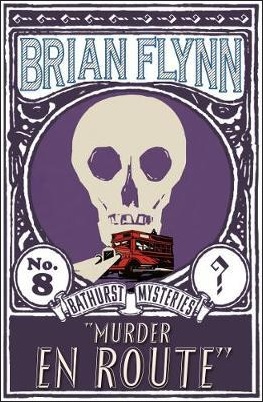 Murder en Route (1930) is the eighth entry in the Anthony Bathurst series and begins on a cold, wet and "unutterably cheerless" night in mid-November that coated the coastal line in a thick fog.

The last motor-bus of the day is the 8.33 from Estings to Raybourne. A one-hour, fourteen-mile journey in an open-decker and the conductor, Frederick Whitehead, has began to notice the same man boarded the bus every night, for a month, at the exact same spot – who always traveled on the open top "no matter what the elements is like." And this rainy night was no different. Whitehead had not been off his platform and can account for every second of the journey, but only the mysterious passenger had ascended the staircase to the open-top of the bus. There he stayed, all alone, until the bus reached its destination. But he never descended that closely observed staircase. So, when Whitehead goes up to investigate, he discovers that the bus was "a blinking hearse" carrying a corpse!

The rain-soaked man is sitting in one of the seats and slumped to floor when the conductor touched his shoulder, but the man had no died of heart attack or exposure to the elements. There were the tell-tale marks of strangulation on his throat. But how did his murderer get on, and off, the bus without being seeing by the conductor or any of the passengers. By the way, the response of the bus driver to the discovery of a murdered man ("why can't people die in their homes—decently?") is why I love the English.

Reverend Parry-Probyn is the Rector of Kirve St. Laudus and the uncle of the wife of the Divisional Surgeon and has recently made his acquaintance with "a brilliant investigator," named Anthony Bathurst, who's greatly admired by the rector's son, Michael – immediately gets called upon to help the local police. Inspector Curgenven accepts his help with the rector and his son only to willing to lend a helping hand.

Firstly, I've to note here something John Norris, of Pretty Sinister Books, touched upon in his own review and that's the weird narrative structure of the story. The story begins in the third person, but Chapter IV introduces manuscript excerpts written in the first-person by the Rector Parry-Probyn. And he was not present for all of the scenes he described. So you get this unusual mixture of first-and third person narration that can be a little distracting, but hardly detracts from the clever plot and the diligent detective work. And Bathurst is in fine form here. 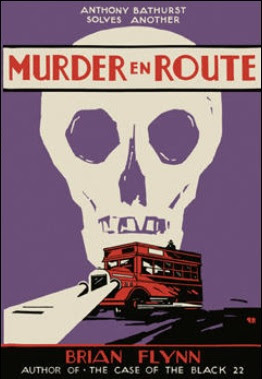 In the even earlier novels, like The Billiard-Room Mystery (1927) and The Murders Near Mapleton (1929), Bathurst played the role of Great Detective like a stage-actor with very little of his own personality bleeding through the performance. Bathurst is still the great, oracular detective in Murder en Route, but something was different this time. This time he was what you get, if you gave Philo Vance a soul.

The victim is identified as an American, Claude Sutcliff, who confided in his landlady that he offended a native tribe, in South America, "over some treasure-hunt" and they were determined "to get even with him" before they were finished – which is why he moved to the Old Country. Bathurst methodically extract the truth behind the murder by closely examining the body, which showed strange wounds on the wrists and peculiar smudge on the back of his overcoat. The fatal bus ride is reconstructed and this leads to a photographic clue as well as a link between the seemingly impossible murder on the top of the bus and the disappearance of an American fruit farmer in the City of Liverpool. This is merely a glimpse of a very involved, clockwork-like plot with many moving parts. Something that could have easily become a complete mess in the hands of a lesser plotter.

A plot with an original, well-clued and imaginative impossible crime with a surprisingly simplistic explanation considering how complex and involved the overall plot is.

I roughly figured out the general idea behind the trick very early on in the story, but completely misinterpreted the wrist-wounds and the smudge on the back. So my idea of the impossible murder played out a little different than the more practical explanation Flynn imagined. A simplistic and practical solution that logically fitted in the overall scheme of the plot. However, the best aspect of the plot and solution is undoubtedly the way in which Flynn played with multiple identities, which came together through the blinkin' cussedness of things to form a truly baffling crime.

I've only read five of Flynn's earlier novels, but he appears to have been to the false-identity what Christopher Bush was to the unbreakable alibi and John Dickson Carr to the locked room mystery. Flynn tackled the problem of identity with the same kind of ingenuity as Bush's cast-iron alibis and Carr's impossible crimes. So I've got something new to obsess about.

Overall, Murder en Route is a solidly plotted and fascinating detective novel about a victim who's as elusive as his murderer, but all of the clues are there for you to pick up and put together, if you can – making it my favorite entry in the series so far. Highly recommended!
Geplaatst door TomCat on 11/05/2019