Murder on Wheels (1932) by Stuart Palmer

An ever-popular setting of the traditional detective story is (public) transportation, mostly ships, trains and the occasional plane, but my previous read, Brian Flynn's Murder en Route (1930), centered on a rarely used means of transport – an impossible murder on top of open-decker motor-bus. This reminded me of another, somewhat unusual, transportation mystery novel that has been languishing on my pile for ages. I was surprised to discover how well the plot of that book synced up with Flynn's Murder en Route. 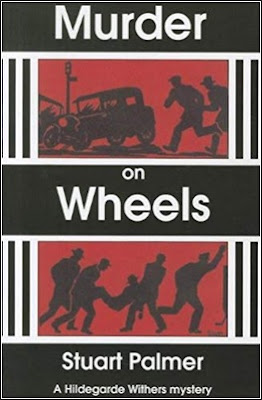 Stuart Palmer's Murder on Wheels (1932) is the second case of arguably the best spinster sleuth of the genre, Miss Hildegarde Withers, who made her first appearance in The Penguin Pool Murder (1931).

Murder on Wheels begins during rush-hour, "on the tag end of a dreary November afternoon," where an open blue Chrysler crashes and became "inextricably entangled" with the fender of a Yellow taxi, but the driver of the Crysler has disappeared from the car-wreck – which was witnessed by the astonished cab-driver. Al Leech tells the police he saw the driver "rise right up out of the seat," into the air, fly down the street backwards! Down the street, the body of a man is found with "a noose of twisted hempen rope" around his neatly broken neck.

Miss Withers and Inspector Oscar Piper were having a quiet cup of tea in a nearby restaurant when the traffic officer started blowing his whistle, which effectively drops this impossible murder, on Fifth Avenue, in their laps.

The victim is eventually identified as a member of an old, once moneyed, New York family, Laurie Stait, whose grandparents used to rate with the Vanderbilts and the Stuyvesants, but now they live on a greatly depreciated income in a "big four-story graystone tomb." Laurie lived their with most of his closest relatives: his twin brother, Lewis, a frightened cousin and a dotty aunt who loves thriller movies, Hubert and Abbie. And living in an impossibly cluttered attic-room, is the 90-year-old grandmother to the twins, Mrs. Strait, whose only companion is a centenarian parrot. A fat, featherless monstrosity with the vocabulary of a piss drunk, foul-mouthed pirate. She lives like a recluse because she got away with murder in the late 1800s.

Naturally, there's a woman involved, Dana Waverly, who was engaged to one of the brothers, but loved the other and she has overprotective brother, Charles – a similar relation/motive arises from a link with a traveling rodeo show. So here we have all the ingredients for one of those typical, top-notch American detective stories from the 1930s. Something along the lines of Ellery Queen's The Tragedy of X (1932) and The American Gun Mystery (1933). But why did it linger on my pile for so long? 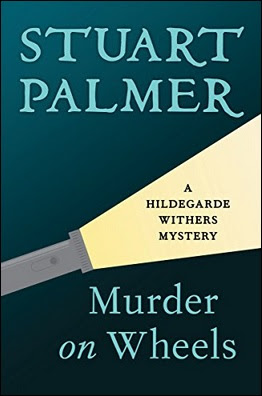 Back in 2011, I bought the brand new edition of Murder on Wheels from the now sadly shuttered Rue Morgue Press, but, around the same time, someone posted a discouraging review – chiding the book for its unoriginal and transparent plot. I've to agree that the play on the false-identity trope and the trick for the impossible hanging in the middle of traffic hardly posed a challenge to the reader, but, technically speaking, the overall plot is a masterly done piece of art.

A plot comprising of many bigger and smaller moving parts that provide some originally handled side-puzzles. Such as what happened to the missing billfold and a surprise wedding, but Palmer saved the best for last. A second, equally bizarre murder is committed very late in the book and the explanation is an inventive, if pulpy, inversion of the locked room mystery with a cruel twist tacked on at the end. Even better is how the circumstances of this second death helped prove one of "the weirdest alibi" Miss Withers and Piper have ever run across.

Yes, Palmer failed to completely pull the wool over the reader's eye, but Murder on Wheels is hardly unoriginal. I even think the apparently cliched plot-thread about identities was cleverly handled, because the solution played out slightly different than you might first expect from the opening chapters and found the hanging-trick interesting – which came with an illustration that was (accidentally) scrambled in the RMP edition. Funnily enough, the trick not only links Murder on Wheels to Flynn's Murder en Route, but Palmer's solution was a variation on the faulty explanation I imagined for the impossible murder on the open-decked bus. I truly had no idea these two books would sync up so nicely.

So, on a whole, I can hardly claim Murder on Wheels is one of Palmer's greatest mystery novels, like The Puzzle of the Pepper Tree (1933), The Green Ace (1950) and Nipped in the Bud (1951), but labeling it as entirely cliched and uninspired is a little unfair – as there are dashes of originality throughout the story. Palmer handled the various plot-threads with great skill, considering this was only his second novel, which all tied nicely together. So the only real problem is that it was not quite good enough to fool any seasoned armchair detective. This is why I can only recommend Murder on Wheels to readers who are either somewhat new to the genre or have already been charmed by Palmer, Miss Withers and Oscar Piper in their later outings. And Murder on Wheels has charm to spare!
Geplaatst door TomCat on 11/08/2019