Christopher St. John Sprigg's The Perfect Alibi (1934) is the third novel in the regrettably short-lived series about the Mercury crime-reporter, Charles Venables, which has been out-of-print for nearly a century and an elusive, over-priced item on the second-hand book market – even the 1941 abridged Cherry Tree edition is a rarity. Last year, Moonstone Press advertises they were going to republish a number of his detective novels in September, 2018, but there was an unexplained, nine-month delay. The Perfect Alibi was well worth the long wait! 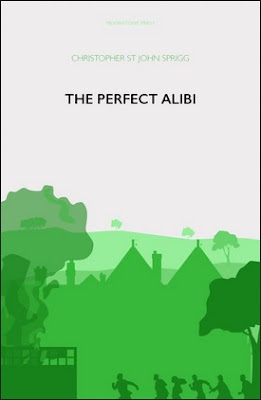 Anthony Mullins, of Morphopoulos & Mullins, is an armaments manufacturer and "a brilliant engineer" who produces the guns that were sold through "an international system of graft" that had been built up by his late partner.

Six months before the story opens, Mullins drafted and signed an accusatory will that will place his wife, Patricia, in "a terrible position in the eyes of the world." The will states that, unless Mullins peacefully passes away in his sleep or a coroner says he had died naturally, Patricia loses a life interest in his estate. Leaving her without a penny. Mullin's reason is that he suspects Patricia has an affair with his nephew and junior partner, Ralph Holliday, which is why Mullins had cut him out of his will completely and send him abroad to get him away from his wife – under the guise of reevaluating Morphopoulos' network. So his safety has been ensured.

The Perfect Alibi opens with the locked, wooden garage on Mullin's estate, The Turrets, ablaze and inside the fire-fighters find the charred remains of the armaments magnate in the driving-seat of his car.

On the surface, the death of Mullins has the appearance of an unfortunate accident, but a post-mortem examination reveals a bullet lodged in the brain and there was no gun or key found inside the garage. So this was either an impossible suicide or a cold, calculated murder. A murder that will seriously test the determination, patience and ingenuity of several detectives over the course of several months.

Charles Venables makes only sporadic appearances in the story, but has a splendid excuse to largely assume to role of spectator in "the Burning Garage Mystery." When he briefly appears in the second chapter, Venables is busily reporting on the Aeroplane Mystery and later departs for Iconia where "the ruling monarch appears to have been murdered." So The Perfect Alibi takes place between the conclusion of Death of an Airman (1935) and the beginning of Death of a Queen (1935)! I thought this was a nice touch to the story and gives room to other characters to shine as detectives.

Inspector Trenton is officially in charge of the investigation, but his subordinate, Constable Sadler, who sees the case as a release from his routine, humdrum duties, does most of the legwork – until even Scotland Yard (off-page) reaches a dead-end. But there two other people, involved with the case, who turn amateur detective and not entirely without success. Francis "Frank" Filson is an artist who initially provided Patricia with a paper-thin alibi and he's roped in to snoop around by the woman in charge of Mullin's stables, Sandy Delfinage. 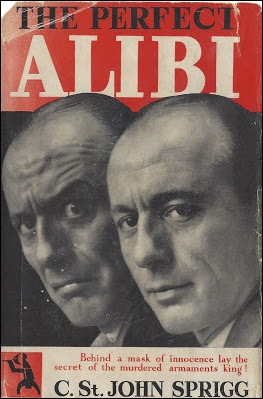 Sandy's primary suspect is Dr. James Constant, the Secretary of the Society for the Promotion of Scientific Research, whose organization inherited the bulk of the estate under Mullin's new will, but Dr. Constant possesses an absolutely unshakable alibi. Dr. Constant is not the only person in the lively, humorously drawn and slightly subversive cast of characters who has a role to play in the story. Dr. Eustace Marabout is a Doctor of Philosophy deeply impressed by "the overwhelming documentary evidence" of the supernatural and swears he saw the Devil "coming from the garage the day before the murder." Lord Overture is the owner of The Turrets, which he let to Mullins for a "paltry sum," but why did he take a potshot at Constable Sadler? Mrs. Murples is a rich, elderly woman who looks like "a pre-dynastic mummy" and uses her money to back young pugilists.

Sprigg had quite a gift when it came to integrating quirky, subversive characters into a highly conventional detective story without making them feel like they're out-of-place. Such as in the splendid The Corpse with the Sunburned Face (1935), but the plot and alibi-trick is where the story really shines.

The Perfect Alibi has a plot deeply entrenched in the tradition of breaking down alibis and identities closely associated with Christopher Bush and Freeman Wills Crofts. Technically, the plot is as sound as a whistle and, as Venables states in the final chapter, every "fact and clue we needed was given us" like "the fairest possible detective story in the world" – complemented by a cleverly done, inverted alibi-trick. There is, however, a problem with this cleverly constructed solution. Nobody ever asks that one obvious question or considers it as a possible scenario. There are features of the case that warranted that question to be asked, but Sprigg conveniently ignored this weak spot until the end.

I think most readers will ask this question or consider it a possibility. When you do, the plot becomes a whole lot less labyrinthine and the ending is not as impressive when Venables, "swinging lazily in a hammock in the gardens of the Royal Palace at Iconia," has one of those flashes of inspiration. You still have to work out the finer details, but you, as the reader, have no excuse not to arrive at the correct solution long before Venables stumbles to it. However, to be completely fair to Sprigg, it probably didn't help I recently read three or four detective novels working with pretty much the same central plot-idea.

So, while the plot of The Perfect Alibi is technically sound, strewn with clues and populated with lively characters, the scheme is easily poked through and took the punch out of its ending. I would rank the book along side Sprigg's debut, Crime in Kensington (1933), which is also a well written, cleverly plotted and amusing detective story, but too easily solved by an observant armchair detective. Still recommended to everyone who enjoys the alibi-busting stories of Bush and Crofts.

This leaves me with only one more Sprigg mystery novel on my pile, but I'll probably save Fatality in Fleet Street (1933) for sometime next year.
Geplaatst door TomCat on 11/11/2019