The Case of the Black Twenty-Two (1928) by Brian Flynn

The Case of the Black Twenty-Two (1928) is only the second entry in the Anthony Bathurst series, but the plot already showed improvement over Brian Flynn's debut, The Billiard-Room Mystery (1927), skillfully unraveling two distinctly different, but inextricably intertwined, murders – committed on the same night while miles apart. Flynn's admiration for Conan Doyle's Sherlock Holmes very subtly bleeds through the story. But more on that later. 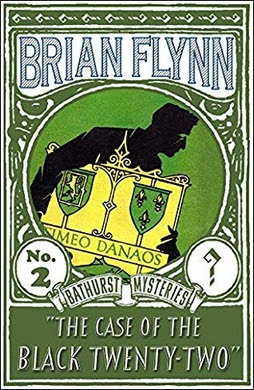 The Case of the Black Twenty-Two begins when a solicitors firm, Merryweather, Linnell and Daventry, receive "a rather peculiar commission" from an American millionaire, Laurence P. Stewart.

Stewart is a collector of "articles of great historical significance" and proudly possesses more than two-thousand objects of "historical interest and association," which have found a home in his private museum. Stewart has a strong preference for historical items with a Royal association, but has "a perfect mania" for anything connected to Mary, Queen of Scots. This all-consuming passion is why he reached out to the firm with a curtly worded letter with instructions.

The senior partner, David Linnell, is instructed to act on Stewart's behalf and purchase three historical articles, a collar of pearls, a tapestry fire-screen and a rosary of amber beads, which all have been "indisputably the property of Mary, Queen of Scots" – all three items will be on sale shortly at the Hanover Galleries. A not entirely conventional request, but a snappy telegram from Stewart confirms the commission. So the junior partner, Peter Daventry, goes to the gallery to inspect the articles in question, but, when Linnell goes there the following day, he found the gallery in "a condition of extreme excitement and agitation."

During the night, the gallery was robbed and the three items on Stewart's shopping list, the pearls, fire-screen and rosary, were taken away, but tragically, the night-watchman was brutally murdered during the robbery. And while Linnell is talking with Detective-Inspector Goodall, Daventry calls the gallery to tell his partner that the son of their client, Charles Stewart, has informed him that his father was bludgeoned to death last night in his library at Assynton Lodge. Inexplicably, the library door and french-windows were securely locked or fastened on the inside. Nothing appears to have been stolen from his private museum room. A pretty solid premise!

But before I continue, I've to pause here a moment and point out two interesting facts about the private museum in The Case of the Black Twenty-Two.

Firstly, a collector's private museum, or room where a collection is stored, is a trope commonly associated with S.S. van Dine and his followers, most notably Clyde B. Clason, but Flynn's use of it anticipates Van Dine – who used it for the first time in The Bishop Murder Case (1929). I thought it was very fitting the museum here is the property of an American millionaire. Secondly, there's a gem of a Sherlockian reference hidden in the museum. A reference that was never acknowledged, but one that can unmistakably linked to one of my favorite Sherlock Holmes stories and, if you spot it, the reference works as a bonus clue to the underlying motive that ties the cases together. What a fanboy! 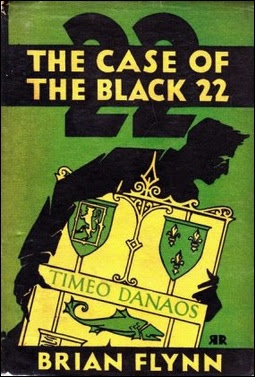 Daventry has a brother, Gerald, who was peripherally involved in The Billiard-Room Mystery and "never tires of singing Bathurst's praises." So when Charles asks the solicitors to recommend him "an efficient, discreet, and trustworthy private detective," Daventry suggested seeking the help of that budding detective. Anthony Bathurst plays the role of Great Detective with his accustomed vigor and deduces his way from stolen fire-screens and little brown stones in a ink-bowl to a missing bullet and an obscure, murky passage of history. A passage telling of a Cardinal's great gift, the Black Twenty-Two. This titular plot-thread is very much in the Doylean tradition and can be linked to that fantastic Sherlockian reference that can be found in Stewart's private museum.

In my opinion, the historical mystery of the Black Twenty-Two is one of the better and most imaginative aspects of the plot. Only overshadowed by the reconstruction of the murder in the locked library. Unfortunately, there are also some less than stellar aspects of the plot that drags it down to the apprentice level of The Billiard-Room Mystery.

Even if you're really generous, there are only a handful of viable suspect. There's the son, Charles Stewart, the victim's ward, Marjorie Lennox, and his private-secretary, Morgan Llewellyn. You can add the mysterious man and who to the list who are, somehow, connected to the gallery murder. But when the genuinely surprising murderer is revealed, you want to cringe so damn hard you start believing Julian Symons had a point after all. A second drawback is the clumsily handling of the locked room angle, which had an uninspired, routine solution, but it hampered the murderer more than it helped – because leaving the french-windows open would have thrown red herring across the trail. Now all of the focus was on the people inside the house.

So, on a whole, Flynn's The Case of the Black Twenty-Two is an entertaining, well-written, but typical 1920s, detective novel with all the flaws and gusto of a burgeoning mystery writer. What really is impressive, considering the imperfections of The Billiard-Room Mystery and The Case of the Black Twenty-Two, is how the quality of plots and originality shot up like a bottle rocket in his next two novels. The Mystery of the Peacock's Eye (1928) and The Murder Near Mapleton (1929) are two of the best detective novels from the twenties, which followed on the heels of two apprentice novels. That kind of rapid improvement is something to be admired.