The Murders Near Mapleton (1929) by Brian Flynn

The Puzzle Doctor, of In Search of the Classic Mystery Novel, has been beating the drum for an obscure, little-known mystery writer, Brian Flynn, ever since he received a rare, hard-to-get copy of The Mystery of the Peacock's Eye (1928) as a Christmas present – marking it as "a cleverly clued mystery" and one "the genuine long-lost classics" of the genre. Over the next year-and-a-half, he unearthed many more gems like Murder En Route (1930), The Orange Axe (1931) and Thread Softly (1937). 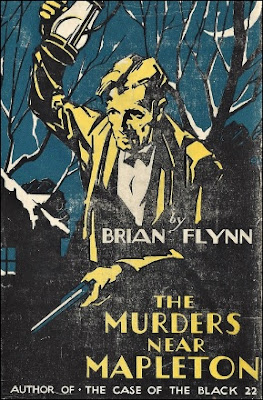 Unfortunately, the lion's share of Flynn's work has been out-of-print for decades and used copies tend to be scarce or expensive. I've seen copies floating around with asking price of more than 1500 dollars! That is about to change.

Dean Street Press is reprinting the first ten of Flynn's Anthony Bathurst detective novels in October, but this time, I couldn't even wait for a review copy and decided to preemptively dip into one of these long-lost classics – picking the highly praised The Murders Near Mapleton (1929). A cleverly done, old-fashioned Christmas mystery lauded by our resident genre historian, Curt Evans, as "a meritorious example of the pure puzzle type of detective novel." I couldn't agree more and would place the book in my top 5 of favorite seasonal mystery novels. Something I'll probably do in December.

The Murders Near Mapleton opens with the host of a Christmas party at Vernon House, Sir Eustace Vernon, asking his guests to charge their glasses and "drink to the empty chairs" of those dear ones "who once were with us," but who have now passed on. A bizarre toast that was the beginning of "one of the strangest cases that ever fell to an investigator's lot to unravel."

Towards the end of the dinner, Sir Eustace announced he had received some bad news and excused himself from the table, but he never returns to them. And what follows is a night of terror with shock following shock. One of the maids gets the scare of her live when she's surprised by an intruder. A suicide note is found in Sir Eustace's study and the door of a small safe in the wall stood wide open, but the second biggest shock of the night comes after the body of the butler, Purvis, is found poisoned in the butler's pantry – a red bonbon with a death threat is found in the victim's pocket. However, the biggest shocker of the evening comes when the doctor takes a closer look at the body.

I'm not going to reveal here what this early plot twist entails, but suffice to say, it would have raised some eyebrows ninety years ago. Interestingly, a similar surprise was used in another mystery novel published in the same year as The Murders Near Mapleton, but Flynn gave it a more practical explanation. Something that'll probably disappoint some modern readers. 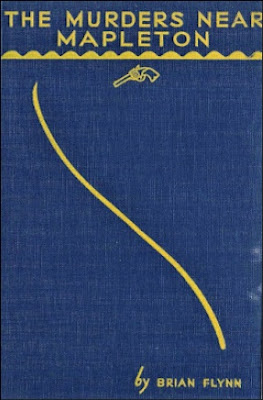 Anthony Bathurst and Sir Austin Kemble, Commissioner of Police at Scotland Yard, enter the picture when they accidentally stumble across an abandoned car and the body of the missing Sir Eustace on the line near Dyke's Crossing. There are traces of blood inside the car and the pathologist finds a bullet in the back of his head. So this was definitely not a suicide. This has only been about a quarter of the story!

Flynn's plotting in The Murders Near Mapleton reminded me of early Christopher Bush with its double murder, closely-linked and committed in short succession, muddling the waters of the investigation – a plot-device Bush often used during the first decade of his career. Some good examples are Dead Man Twice, (1930), Dancing Death (1931), The Case of the April Fools (1936) and The Case of the Tudor Queen (1938). There was another aspect of the solution that recalled Bush, but you have to spot that one yourself. However, where Flynn differs with Bush are his two detectives, Bathurst and Sir Austin, who are the polar opposites of Ludovic Travers and Superintendent George Wharton. Sir Austin is a colorless character and hardly contributed to the solution, while Bathurst very much plays the role of Great Detective. A detective who plays his cards close to the chest, without withholding any clues, as he mutters "I think I begin to see light at last" after asking apparently irrelevant questions about bonbons or "the colors of the dresses worn by the various ladies" during the Christmas dinner.

The line-up of suspects is not littered with the familial, stock-characters you normally expect to find in these type of Christmas-time detective stories (e.g. Agatha Christie's Hercule Poirot's Christmas, 1938).

Sir Eustace only relative is his niece, Helen Ashley, who's orphaned and lives with her uncle. She invited her friend and obligatory love interest, Terrence Desmond. Father Jewell, the ascetically priest in charge of the Roman Catholic Church in Mapleton. The mayor and mayoress of Mapleton, Alfred and Emily Venables, who felt snubbed when he was passed for baronetcy in favor of Sir Eustace, because he had heroically saved a dozen children from "a rapidly burning building." Major Prendergast and his wife, Diana, who was in a bidding war with Sir Eustace over a patch of land that may have a vain of tin under it. Doctor Lionel Carrington is the physician who makes a starling discovery. There are two London friends of Sir Eustace, Mr. and Mrs. Morris Trentham.

Finally, there are some local characters who play a role in the story: the coffee-stall keeper, Sam McLaren, who was attacked somewhere in the vicinity of Vernon House. One of the maids has a sailor boyfriend, Albert Fish, who may also have been near Vernon House on the night of the murders. However, the only truly good, well-rounded character turned out to be the victim, Sir Eustace, who was revealed by the end to be somewhat of a dualistic character. Someone with a great capacity for doing good and evil in equal measures. 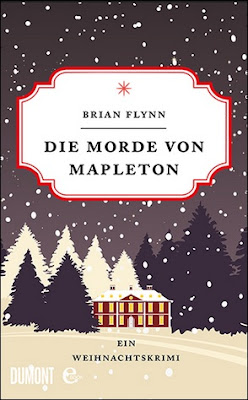 As Flynn probes this group of suspects and considers such clues as red bonbons, cigar ashes, two suicide notes, stage-plays and a piece of slab-tobacco, as he works his was to a truly surprising solution – a surprise because I had briefly considered it and completely rejected it. So I was as astonished as Sir Austin when the murderer was revealed. Well played, Mr. Flynn. Well played.

There are, however, two minor points I have to nitpick about. Why didn't they immediately tracked down Cornelius van Hoyt to ask him what Sir Eustace kept in the wall safe? Sure, it would have resolved the plot-thread about the intruder, but this would not have been to the detriment of the overall story. The plot had more than enough to go on had the problem of the intruder been resolved by the halfway mark. Secondly, even with all the clues, you can only really guess at the motive. Or the story that lay behind it.

Other than those two, relatively minor complaints, The Murders Near Mapleton is a shrewdly plotted, fairly-clued detective novel and deserving to be marked as a long-lost classic of the seasonally-themed mystery novel. A fine addition to the ever-growing list of unjustly forgotten detective stories rescued from obscurity by DSP and look forward to October!

On a final, related note (or two): I asked in my recent review of Moray Dalton's The Night of Fear (1931) if the tradition of Christmas mystery novels started with The Night of Fear and Molly Thynne's The Crime at the Noah's Ark (1931), because I couldn't remember any example of one predating those two. Well, that question has now been properly answered. Secondly, a German translation of The Murders Near Mapleton, entitled Die morde von Mapleton: ein weihnachtkrimi, is slated for release on September 16, which is around the same time as the DSP reprints. So does this mean that even Germans are abandoning the drab, soulless post-modernish of contemporary crime-fiction? Huge, if true!
Geplaatst door TomCat on 9/06/2019