Behind the Music: "The Riddle of the Humming Bee" (2017) by Paul Charles

Just like my previous blog-post, this is a return to a mystery writer I only discovered last year, namely Paul Charles, who's a concert promoter, manager and an avid consumer of detective stories from Northern Ireland.

Paul Charles was inspired by Colin Dexter's Inspector Morse to create his own series-detective, Detective-Inspector Christy Kennedy, who made his first appearance in I Love the Sound of Broken Glass (1997), but I started with the fourth title in the series, The Ballad of Sean and Wilko (2000) – a modern locked room mystery with two impossible murders deeply immersed in the British music scene. And that last bit seems fairly typical for Charles' output. 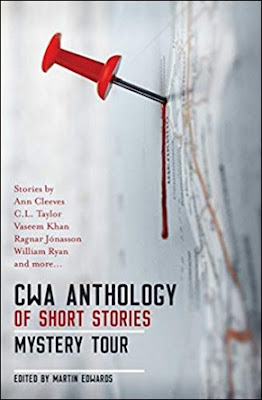 I wanted to make his second locked room mystery, The Hissing of the Silent Lonely Room (2001), my next stop in the series, but recently discovered Charles has penned a short, inverted-like impossible crime story.

"The Riddle of the Humming Bee" was originally published in the CWA Anthology of Short Stories: Mystery Tour (2017), edited by Martin Edwards, which takes place during a tour of the Humming Bees. A band who had "a reasonable first flush of success" with their first album and had a popular song on their second, "Skybird," but the lead-singer, Harry Hammond, could "only dream about the success that had so far evaded the band." So the Humming Bees are pretty much on the road to obscurity and the story opens when the band has arrived at the 149-year-old Ulster Hall in Bedford Street, Belfast, where the body of the lead guitarist, Barry "Joey" Simpson, is found face down in a five-hundred-gallon water tank – a guitar string still embedded deeply in his neck. Inspector McCusker doesn't know "a lot about pop music or musicians," but the burden falls on him to untangle this knotty problem.

Firstly, "The Riddle of the Humming Bee" is rich in detail when it comes to the history of the band and the relationship between the main band members.

Obviously, Charles enjoyed fleshing out the background of the Humming Bees, which humbly began as "an Everly Brothers kind of act," but Joey's brother, Brian, had "no stomach for the road" and Harry Hammond was enlisted to take his place. However, Brian was a good song writer and their first album consisted entirely of his songs. And their best-known song was also from his hands. This collaboration ended when the brothers had a fallout and the band began to decline in popularity.

You can find a similar exploration of the back-story of a once popular band during a seventies revival in The Ballad of Sean and Wilko, which is definitely a strength of the series, because the pop-music scene is not a backdrop often used in these kind of traditionally-structured mysteries – giving it a touch of authenticity and infectious enthusiasm by the author's first-hand knowledge and love for the subject matter. Unfortunately, in the short story format, this came at the cost of the plot.

A warning to the reader: the weird structure of the story, as discussed below, made some spoilers unavailable. Nonetheless, I tried to be as short and vague as humanly possible. So the reader has been warned!

"The Riddle of the Humming Bee" begins with setting up, what appears to be, a classic locked room situation, but this leads to the discovery of a non-impossible murder and the beginning of a whodunit. Only for McCusker to decide 2/3 into the story that people with "nice tidy alibis" are suspicious, which turns the story into an inverted impossible crime tale, as the murderer had locked himself into his hotel room that was under observation. The locked room-trick is very involved and depends on the architecture of the building, but the scene of the crime is never explored and this makes the explanation feel like a bit of a cheat, because it hinges on a lot that we're never told about. Such as what was right outside the window.

"The Riddle of the Humming Bee" has an interesting premise with a good, fleshed out background, but the way in which the story was told and structured prevented the plot from playing fair with the reader. I think could have been prevented had the story been played as an inverted locked room mystery from the start. So the story left me a little disappointed. However, this minor letdown won't deter me from trying The Hissing of the Silent Lonely Room in the future.
Geplaatst door TomCat on 9/24/2019