The Billiard-Room Mystery (1927) by Brian Flynn

Brian Flynn was a government accountant, lecturer and author of more than fifty detective novels, most of them starring his dilettante, Anthony Bathurst, but they had fallen into complete obscurity – until The Puzzle Doctor began reviewing a good chunk of his often rare, hard-to-get mysteries on his blog in early 2018. Nearly two years later, Dean Street Press announced they're going to reprint Flynn's first ten mystery novel. 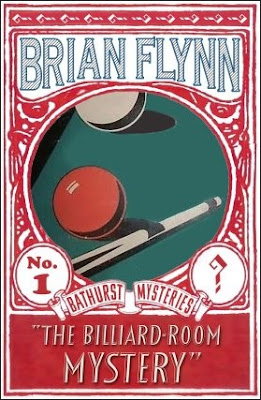 Curiosity got the better of me and decided to dip into the series ahead of the reprints in October, which brought me to a cleverly crafted, Christmas-themed detective story, The Murders Near Mapleton (1929). A criminally overlooked mystery novel that whetted my appetite, but we're still a good month removed from the republication of Flynn's tantalizing, long-lost gems such as The Mystery of the Peacock's Eye (1928) and The Orange Axe (1931). Luckily, the first book in the series is relatively easy to get hold of nowadays.

The Billiard-Room Mystery (1927) is a fairly typical, 1920s country house mystery presented by the narrator, Bill Cunningham, as one of the cause célèbre of its day.

The stage of the crime is Sir Charles Considine's ancestral home, Considine Manor in Sussex, where he holds an annual Cricket Week. Cunningham is the bosom companion of Sir Charles' eldest son, Jack, which is why he comes down every year to take part in the Cricket Week, but also present are Jack's two sisters, Helen and Mary. Helen is married to "a big, bluff Dragoon," Captain Arkwright, while Sir Charles invited a newly-minted friend of Mary, Gerry Prescott – who took Cunningham's place on the cricket team. There are two service men and friends of Arkwright, Major Hornby and Lieutenant Barker. And the latter lost a chunk of money in a card game to Prescott on the eve of the murder.

Lastly, there's another, old school chum of Cunningham, Anthony Bathurst, who has been with at Uppingham and Oxford. Bathurst is described by his friend as "the kind that distinguishes whatever he sets his hand to" and the discussion on detective stories, in the first chapter, can be read as a brief prologue to his impending career as an amateur detective.

One of Bathurst favorite topics is "The Detective in Modern Fiction" and, like everything that aroused his interest, he knew it "backwards, forwards, and inside out."

Bathurst states that, like the immortal Sherlock Holmes, he has the greatest contempt for Emilé Gaboriau's M. Lecoq, but Edgar Allan Poe's Auguste Dupin "wasn't so bad." So who are, in his opinion, who can stand with Holmes? Bathurst thinks "Mason's M. Hanaud, Bentley's Trent, Milne's Mr. Gillingham, and to a lesser degree perhaps, Agatha Christie's M. Poirot are all excellent in their way" – dismissing Father Brown as being too Chestertonian. You can definitely see the influence of some those writers had on the characters, plot and writing of The Billiard-Room Mystery. 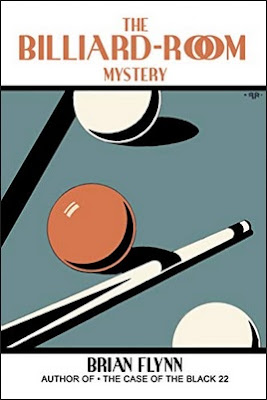 Bathurst is asked, in the event of finding himself on the spot of a murder, if he could solve the case quicker than a trained policeman? His answer: absolutely!

Everyone wakes up the next morning to the screams of the maid yelling blue murder. She found the body of Gerry Prescott lying on the billiard-table, face down, with the Venetial dagger from the curio table driven down the base of his neck, but the police doctor determines he had been strangled to death with a boot-lace – which is missing from the body. There were chairs overturned and window was standing open with footprints beneath it. If things weren't complicated enough, the discovery is made that Lady Considine's pearl necklace had been stolen on the night of the murder.

In the first chapter, Cunningham mentioned he had attended a private theatrical performance in which Bathurst was playing the lead. I thought this is very fitting pastime for Bathurst, because he strikes me as a character-actor who plays the role of Great Detective. A similar observation was made in my review of The Murders Near Mapleton.

Bathurst utters such phrases "an elementary piece of reasoning" and "I'm beginning to see a little more light" as he makes deductions or adds a new item to the "maze of clues." There's even a scene in which he examines the floor-covering of the billiard-room, on all fours, with a magnifying glass. So he's very much a late addition to the Rivals of Sherlock Holmes that bridged the gap between the Gaslight Era and Golden Age. Nonetheless, as theatrical as his performance may be, Bathurst tackles the problems of the billiard-room murder with enthusiastic vigor and works hard to separate "the faked clues from the true ones" with Cunningham playing the role of baffled Dr. Watson – which gives the story some period charm. Hey, there's something affectional about two friends interfering in an official murder investigation.

The Puzzle Doctor touched in his own review of The Billiard-Room Mystery on "one aspect of the story resembling something else in another Golden Age title," but assured that the books were developed independently with Flynn's manuscript doing "the rounds of publishers for over a year." 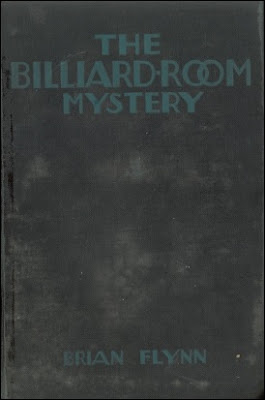 However, the characters, story-telling and central-trick of the plot were definitely inspired by two mystery novels that were published earlier in the decade. And these two books probably also inspired the novel this one resembles. Unfortunately, this is a bit of a drawback, because Flynn was clearly imitating what others had done before him and this strangely makes The Billiard-Room Mystery feel like a modern pastiche of a 1920s country house mystery.

On the other hand, I have to defend the book against the claims that it didn't play entirely fair with the reader. There were clues. However, the good clues were clumsily handled and showed Flynn's inexperience as a plotter, but the clue of the person who was seen spying on Prescott by Mary, more than once, could have been brilliant in the hands of someone like John Dickson Carr – same goes for the clues of the discovery of the missing I.O.U. and the torn letter found under a bed. The torn fragments of the letter poses a minor, quasi-impossible puzzle: the handwriting is easily identified, but this person claims not to remember ever having written it. A clue, of sorts, that could also been put to better use. So the solution didn't entirely came out of left field, but the clueing wasn't optimal.

Obviously, Flynn still had a lot improving to do in the plotting department, but the sub-plot of the stolen pearls was deftly handled and reads like a short story that got ensnared in the web of a bigger, more ambitious plot. Yes, this involves one of those unlikely coincidences of two criminals striking in the same place, at the same time, but Flynn handled it convincingly here. Showing some of that promise on full display in The Murders Near Mapleton.

So, while the plot has its imperfections, The Billiard-Room Mystery is still a cut above the average, 1920s drawing-room detective novel and played the Grandest Game with infectious enthusiasm. A promising debut from an unjustly forgotten mystery writer and look forward to the first ten reprints coming in October.
Geplaatst door TomCat on 9/10/2019