Enid Blyton's The Rat-a-Tat Mystery (1956) is the fifth of six novels in The Barney "R" Mystery series, the only series she wrote for children over the age of eleven, which follows the exploits of "a down-at-heel circus-boy," Barney – whose sole companion used to be his pet monkey, Miranda. A rather lonely existence that ended when he befriended two siblings, Roger and Diana Lynton, along with their mischievous, trouble-making cousin, "Snubby," in The Rockingdown Mystery (1949).

So now they're spending their holidays together and these sleepovers generally result in the Lynton home resembling a disaster-stricken area. 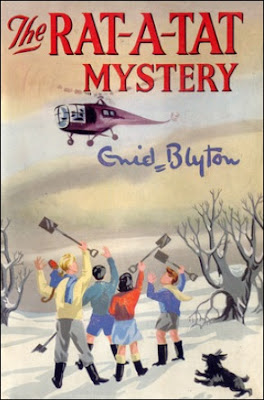 The Rat-a-Tat Mystery opens with Mr. Lynton putting down his newspaper, as a crash came from upstairs, asking his wife "how long do these Christmas holidays last." Christmas had been "a mad and merry time" in the house with a drizzling rain keeping the children indoors and Snubby's always enthusiastic black cocker spaniel, Looney, sweeping through the place "like a hurricane" – slowly driving Mr. Lynton to his limits. Luckily, an unexpected telephone call from Barney invited Roger, Diana and Snubby to come and stay with him for the remainder of their holiday at a big lakeside house that his grandmother owns. Apparently, Barney found his long-lost family in The Rubadub Mystery (1952).

Rat-a-Tat House is an old, remote place with turrets, towers and tucked-in windows, where "Oliver Cromwell once stayed" and "a celebrated Spaniard" was imprisoned, which lays at a now frozen lake. The house also has a ghost story to tell.

Originally, the place was named after the lake and village, Boffame House, but 250 years ago, someone began hammering on the front-door with "the enormous lion's head knocker." When the footman hurried to answer the door, nobody was standing there. This phantom knocker went on for a hundred-and-fifty years and people believed it was a warning that there was "a traitor in the house," but it has been over a hundred years since the ghost "hammered at the door" with the lion-headed knocker. So why would it start it now, right?

Well, the first few days at Rat-a-Tat House were pure bliss with them playing card games, ice skating, snowball fights, tobogganing and building a huge snowman, but the silence of the second night is broken by a strange, eerie knocking sound ("RAT-A-TAT-TAT! RAT-A-TAT-TAT!") – someone was hammering on the front-door with the knocker. When they go investigate the following morning, they discover a singe track of heavy boot prints going to the bottom of the front-door steps. There were, however, "no footmarks showing that he walked away again." Whoever this person was, he could not have entered the house through the front-door, because it was securely locked on the inside with two great bolts, top and bottom, two locks that were stiff to turn and "a heavy chain." So how did this person manage to vanish into thin air? And this is not the only impossible situation of the story.

Mrs. Tickle is the sister of Barney's grandmother's cook and the adult supervision at Rat-a-Tat House. She witnessed how the big snowman the children had made, which has now disappeared, shuffled pass the kitchen window and had looked inside! Add to this that the snowfall has cut them off from the outside world and the presence of two of unsavory characters with an interest in the cellar, they once again find themselves up to their necks in trouble. Sadly, this charming and intriguing premise is as good as The Rat-a-Tat Mystery is going to get. I've praised Blyton's superb handling of the clues and red herrings in The Mystery of the Invisible Thief (1950) and the warm, lively characterization and sparkling humor of The Rilloby Fair Mystery (1950), which also had a clever innovation on an age-old locked room-trick, but none of those qualities were present here – as the plot is largely uninspired and razor-thin. The solution to the single track of prints in the snow is another oldie, but this time without a touch of originality and the answer to the peeping snowman was disappointingly simple. And those two shadowy villains lurking around the house? They only briefly appeared, but mostly remain in the background and the conclusion to these main plot-threads, which tied everything together, was concluded off-page.

The Rat-a-Tat Mystery still has some wintry charm and a lingering Christmas spirit, but lacked the lively, sparkling humor and characterization of The Rilloby Fair Mystery. It didn't exactly helped that the plot was uninspired and starved of even an ounce of ingenuity. So you can say this was a bit of a letdown.

However, I don't want to end this review on a sour note and so decided to give you my own two alternative solutions to the two impossible situations from this story. If only to prove why I'm everyone's favorite locked room fanboy (right, guys?).

Firstly, we have the puzzle of the single track of boot prints in the snow, but my answer depends on a third, mini-locked room puzzle: how where the villains able to enter the kitchen when Mrs. Tickle had locked and bolted the kitchen-door? The answer to this little side-puzzle is quickly found and I would have used as both a clue and as the key to the ghostly knocking on the front-door. In my scenario, one of the villains would enter the house through the kitchen and unlocked the front-door, while the other walked towards it, knocked and entered – locking the door behind them and vanishing from the house with their kitchen-door trick. This would make it appear as if the knocker had impossibly vanished from the front-steps. You only have to come up with an explanation as to how they got their hands on a (duplicate) key to (un)lock the front-door.

My alternative solution to the wandering snowman may seem obvious, but there were certain items present in the story offering a way to make the situation appear to be truly impossible.

I would have tightly wrapped a piece of tarpaulin, taken from the boathouse, around one of the toboggans and remade the snowman on top of it, because one snowman looks very much like the other – especially if you dress him up with the ornaments from the original snowman. And then you drag it across the kitchen window. Why wrapped the toboggan in tarpaulin, you ask? The tarpaulin helps make the track-marks of the toboggan look (slightly) different from the track marks the children made with the unwrapped toboggans. More importantly, it would give the impression that the snowman had actually come alive and had dragged himself through the snow.

So what do you think of my two alternative solutions? Would you accept them as solutions to these, admittedly, originally posed impossible problems?

Anyway, The Rat-a-Tat Mystery was a huge disappointment after being pleasantly surprised by the unexpectedly good The Mystery of the Invisible Thief and The Rilloby Fair Mystery, which I didn't expect from Blyton, but if you're looking for a harmless, wintry mystery with a little charm, you can easily throw this one on your holiday reading-list. Other than that, I can't really recommend it.
Geplaatst door TomCat on 11/23/2019