When you're a wholesale consumer of detective fiction, like yours truly, you inevitably come to appreciate originality and, as Steve Barge stated in his introduction to The Orange Axe (1931), Brian Flynn made "an effort to do something original with each of his books" – which should explain why I've been enjoying his work so much. The Orange Axe has an original premise that allows the story to be told as both an inverted mystery and a fully realized whodunit. 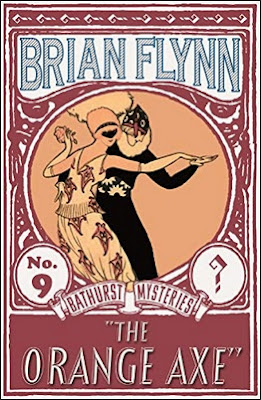 André de Ravenac is an unmerciful blackmailer and likely the Parisian serial killer, known as "Le Loup de Poignard" (The Dagger Wolf), who murdered "nine of its most worthy citizens" with "a dagger through the victim's heart." Unfortunately, the French authorities were too late to apprehend him and he had cleared out of the country before they could get to him. Now he has turned up in England as a high society blackmailer with the wife of a British minister as his latest victim. However, Josephine Pelham counts a number of "certain men of honour" among her inner circle who are more than happy to remove De Ravenac from her life.

Major Daniel Wyatt summoned these men to a private-room of a restaurant, in Soho, where he unfolds a plan to them to commit the perfect murder.

This group comprises of Lady Pelham's brothers, Dick and Robin Blaker, their cousins, Gerald and Nick Twining, and journalistic friend of Major Wyatt, Martin Pierpoint – who are told about De Ravenac's bloody past in France. So they all agree that he has to be removed, but, as one of them ask, is "a beetle worth hanging for?" The answer is clearly no, but Major Wyatt has plan that should prevent them from meeting the hangman.

Sir Beverley Pelham is the newly appointed British Minister at Santa Guardina, the capital of the fictitious Republic of San Jonquilo, in South America. A bal masque is scheduled to take place at the Pelham house in honor of San Jonquilo's President, Sebastian Loredana. De Ravenac has secured an invitation to the carnival ball.

So the plan is to, anonymously, assign everyone a random role to play in the murder by drawing lots. The person who draws "the slip of paper that means 'direct' action" may be any one of them and only one "will ever do more than suspect who it actually is." A very original premise, especially for the time, which appeared to have gone off without a hitch when De Ravenac's body is found, lying across the threshold of the refreshment-room, with a long, ivory-handled knife in his chest and clutching a torn piece of black and orange silk – which are the national colors of the Republic of San Jonquilo. This murder brings an honored guest at the ball to the scene, Sir Austin Kemble of Scotland Yard, but President Loredana, angered by the murder, tells him to call upon the "finest English detective" he knows. And that brings Anthony Bathurst into the case. 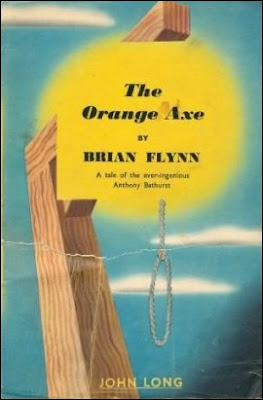 Obviously, the readers knows a little more than Anthony Bathurst, but this is hardly any help as another original bit turns up in his investigation: two "absolutely different sets of clues." Not a set of false and true clues, but two sets of "thoroughly authentic and genuine" clues. Such as strange discovery they made in the bowl of claret cup and the inexplicable fact that Señor Miguel Da Costa, the Chancellor of San Jonquilo, was apparently in two different places at the same time. These complications, in combination with the masked ball, gives Flynn an opportunity to indulge in his beloved Doylean disguises and false-identities. Something he was hesitant to fully utilize was the impossible crime element.

There were locked room and seemingly impossible murders in The Case of the Black Twenty Two (1928), Invisible Death (1929) and Murder en Route (1930), which were clearly defined as impossibilities, but the murderer in The Orange Axe apparently managed to escape from a place a rat couldn't get out of without being seen. So, technically, this would qualify as a locked room mystery, but, the semi-inverted nature of the plot, made me decide against labeling this review as such and that's a shame – because the answer to this impossibility helps Bathurst demolish a number of alibis. However, this is just nit-picking on the part of a chronic sufferer of miraculitis and the main tricks of the plot are the two sets of clues and the breaking down of alibis. Not just the previously mentioned cast-iron alibis, but also "an absolutely perfect alibi" the murderer concocted.

If there's anything to honestly complain about The Orange Axe, it's that the semi-inverted approach allowed to reader to catch on what really was happening way too early. The clues become less mystifying and the murderer is not the surprise it could have been. That being said, Flynn did his damnedest to mislead the reader until the last possible moment, which actually made me second guess myself. Something I can always appreciate in a mystery writer.

Flynn was evidently experimenting with the possibilities the detective story has to offer in these first ten novels and The Orange Axe is a good example of this. The story and plot are not entirely flawless, but has good story-telling with a complex and innovative plot that coherently sticks together. Add to this a galore of fabricated alibis and you have a detective novel that comes particularly recommended to fans of (early) Christopher Bush and Freeman Wills Crofts.

Well, I only have three more reprints, from Dean Street Press, left to go, The Five Red Fingers (1929), The Creeping Jenny Mystery (1930) and The Triple Bite (1931), which makes me really hope there will be more next year, because I want to see where Flynn goes from here. So I'll try to save at least two of them for early next year.
Geplaatst door TomCat on 11/26/2019