Invisible Death (1929) is the sixth novel about Brian Flynn's Holmesian gentleman detective, Anthony Bathurst, which has the distinct honor of being the most unconventional, but very memorable, entry in the series – written and structured like a turn-of-the-century shilling shocker. I think Flynn intended to write the book as an homage to Conan Doyle's The Sign of Four (1890), The Hound of the Baskervilles (1902) and The Valley of Fear (1915), but ended up being more reminiscent of Agatha Christie's The Big Four (1927). Only Invisible Death has much more consistency than the patchwork plotting and story-telling of The Big Four. 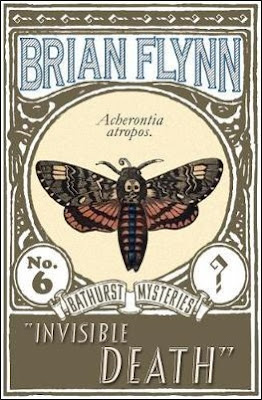 Anthony Bathurst receives a letter from Constance Whittaker, a cousin of Diana Prendergast from The Murders Near Mapleton (1929), who pleads for him to come down to Shallowcliff Hall in Lacashire. The letter strongly hinted that "something very dark and very sinister" had placed her husband, Major Guy S. Whittaker, in "grave danger."

So, since he never lets a cry for help go unheeded, Bathurst sets out for Shallowcliff Hall, but, the moment he sets foot in Liverpool, he finds there are some nasty-looking shadows close on his tail.

There's a man with a withered arm. A fat, silky-voiced slug of a man. A huge man with a, dirty, brown-beard. Lastly, a man with mutilated lips who turns out to be the leader of the group. Bathurst later learns these men are what remains of a Russian society, The Silver Troika, who were decimated by Major Whittaker during a special in the Great War – returning to England with the documents, papers and minute-books of the society. Now they want it back! Since the favorite afternoon pastime of the Troika is the same as the evening occupation, namely murder, only "a trifle more so," Bathurst decides to enlist the help of an old acquaintance.

Peter Daventry is the young lawyer who brought Bathurst into The Case of the Twenty-Two Black (1928), but here, to fit occasion, Flynn transformed him into one of those posh, smart-aleck men of action. A handy person to have around when you find yourself in the middle of a chase thriller.

Bathurst and Daventry attempt to sneak their way up to Shallowcliff Hall unseen and have to go through several middle-men, give them passwords and cross Ugford Moor, locally known as The Knype, into the eerie, foggy Little Knype Wood. Needless to say, this is quite a departure from the more conventional novels that preceded it, like The Mystery of the Peacock's Eye (1928), but I thought it was very well done. And an excellent premise for what is about to happen!

Shallowcliff Hall eventually comes under siege by the Silver Troika, but, before they can get their murderous hands on Major Whittaker, he suddenly drops dead without anyone being nowhere near him and a post-mortem reveals he had been cleverly murdered – poisoned with a "tincture of aconite." Only question is how the poison could have been administrated without being seen. This poses a two-sides problem: on the one hand, Bathurst has to deal with the Silver Troika, while on the other hand he has to figure out who poisoned Major Whittaker. And how. A pretty and unusual puzzle comprising of such pieces as a stolen letter and the presence of an American entomologist, Horace Garland-Isherwood, who has the habit of surreptitiously sneaking around the garden. 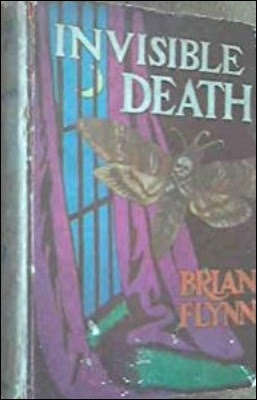 The only plot-thread here that can really be discussed, without spoilers, is the impossible murder, but there's one part about the siege of the Silver Troika that needs to be highlighted.

There's a brief, uncharacteristic torture-scene in which the Troika try to extract from Major Whittaker's batman, Neville, with a so-called "Persuader." A tool that left Neville's right thumb "a piece of red, raw pulp." You practically never find this kind of gory violence in the work of writers associated with the traditional detective story and, if you ignore the rare third-degreeing at the hands of the police, the only other example I can think of is Rex Stout's The Golden Spiders (1953) – in which Archie uses some physical persuasion to make someone talk. Stout had the excuse of being an American. So this is just a very small example of how unusual a mystery this one really is.

However, you're not here to read about the professional proclivities of a bunch of homicidal villains who were plucked from the pages of a dime pulp. You're here for the impossible crime! Why else would you come here?

Steve Barge, the Puzzle Doctor of In Search of the Classic Mystery Novel, who wrote the introductions for these new Dean Street Press editions said in his 2017 review that the poisoning method, as far as knew, "original for the time." This is kind of true. The trick has been used since 1929, one example can be found in a late '90s episode from the Dutch TV-series Baantjer, but there's a little-known short story from 1928 that used a similar poisoning-trick. Nonetheless, the book may be a first in another department.

Invisible Death intriguingly merged the impossible crime story with the dime thriller by setting it in a house under siege by criminals. An original premise more famously used in T.H. White's Darkness at Pemberley (1932) and Carter Dickson's The Unicorn Murders (1935), but Flynn's Invisible Death was there first.

Admittedly, the book is, plot-wise, the lightest so far encountered, but what it lacked in complexity was made up by the sheer joy of the story-telling, the weirdness of the plot and the evil, pulp-style villains – something that would have sunk it in the hands of a lesser writer. This is how you book evil foreign heels! As usually, Flynn's undying love for Sherlock Holmes bleeds through the pages and it's starting to have its effect on me. I now want to reread The Sign of Four or The Hound of the Baskervilles before the year draws to a close.

So, in closing, I highly recommend Invisible Death to everyone who already has read some of Flynn's conventional detective novels, because he'll be giving you something completely different here that worked surprisingly well. Invisible Death is easily one of the most fun detective stories that I have read this year.
Geplaatst door TomCat on 11/18/2019