The Mystery of the Peacock's Eye (1928) by Brian Flynn

They're finally here! Earlier this month, Dean Street Press reissued the first ten novels in the long out-of-print Anthony Bathurst series by an unjustly forgotten mystery writer, Brian Flynn, but I grew tired of waiting and dipped into three novels ahead of the reprints – namely The Billiard-Room Mystery (1927), The Murders Near Mapleton (1929) and The Spiked Lion (1933). I was favorably impressed by all three of them and made me look forward to the rest even more. 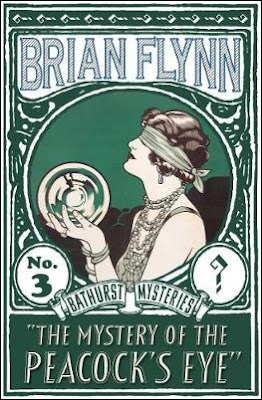 So, now that I finally got my hands on a couple of reprints, I wanted to read the novel that put Flynn on his journey back to the printed page.

Some years ago, Steve Barge, who's better known as "The Puzzle Doctor" of In Search of the Classic Mystery Novel, received a normally hard-to-get copy of Flynn's The Mystery of the Peacock's Eye (1928) as a Christmas present. It was love on first sight. Over the next two years, Steve posted many tantalizing reviews on his blog of Flynn's often obscure, long out-of-print detective novels and probably began blackmailing pestering Dean Street Press behind the scenes to get Flynn reprinted – until they finally relented. Steve also introduced these new editions instead of Curt Evans (turf war, turf war, turf war!). So, with the intro out of the way, let's dig in!

The Mystery of the Peacock's Eye is the third entry in the Anthony Bathurst series and shows the same quality of complex, but ultimately simple, plotting that was on display in The Murders Near Mapleton and an obvious admiration for Conan Doyle's Sherlock Holmes.

The first three chapters set the stage with the introduction of three, apparently separate, events that become hopelessly intertwined when they begin to interact and disentangling all the plot-threads takes quite some work. The first act takes place at The Westhampton Hunt Ball, "the outstanding event of the season," which has been honored with "the presence of Royalty" and Sheila Delaney dances with a stranger. A stranger who prefers to stay incognito and was introduced to Sheila as Mr. X. In the next chapter, Flynn takes a page from Doyle's "A Scandal in Bohemia" (collected in The Adventures of Sherlock Holmes, 1892) when Bathurst is called upon by Alexis, Crown Prince of Clorania, who's engaged to the Princess Imogena of Natalia – a union that will bind Clorania and Natalia in "an irrevocable alliance." Regrettably, His Royal Highness had been indiscreet with a woman and is now being hounded by a blackmailer.

Chief Detective-Inspector Richard Bannister is one of the "Big Six" of Scotland Yard and in the third chapter "Dandy Dick," as he's known to friends, is enjoying a well-deserved holiday, but is disturbed by Sergeant Godfrey from the Seabourne Police Station. A murder has been reported to them and they immediately turned to the famous Scotland Yard detective for help. 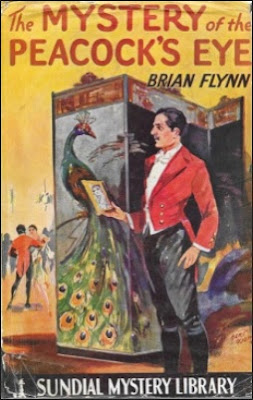 A young lady went to the dental surgery of Mr. Ronald Branston, a posh dentist, to get a tooth extracted, but when Branston briefly went into his workroom, he was locked inside. Branston's cries attracted the attention of his housekeeper, but, when he returned to his surgery, he found that the lady was sitting dead in the operating chair. All around her mouth "hung that unmistakable bitter almonds smell." This is merely the premise of a case that becomes hard to comprehend when these three, seemingly unconnected, events begin to interact and found myself grasping at shapes and shadows without getting hold of the full truth. But the beautiful and complex layering of the plot doesn't allow me to divulge much more about the story.

What I can tell you is that Bathurst and Bannister made a great team, wonderfully playing of each other, as they tried to grapple with the problems facing them. Such as why the identity of the victim was obscured, who was the mysterious Indian who called upon the victim a month before the murder and how all of this is tied to the Peacock's Eye – a "magnificent blue-shaded emerald" of "somewhat peculiar shape." There's also a delightful series of chapters in which the detectives track down several banknotes that were stolen from the victim. And these banknotes changed hands quite a few times between suspects and side-characters in the story. Flynn knew how to pen an engrossing detective story!

However, the biggest surprise, besides the solution, came in the final chapters when the action moved from England to "the spider-web city" of the "Land of Water," Amsterdam, The Netherlands, where the chief of the Dutch police, Cuypers, lends a hand in apprehending the killer. Normally, when English detectives cross the channel, they go to France. So this was a very pleasant surprise. It almost felt like going from an English Golden Age mystery to a translation of a Appie Baantjer novel.

So, all in all, Flynn's The Mystery of the Peacock's Eye succeeded marvelously in making an ultimately simple, grubby crime appear like an inescapable, maze-like problem, but with all the clues to the very interesting solution sprinkled throughout the story – making it one of the better detective novels of the 1920s. Obviously, Flynn admired Doyle's Sherlock Holmes, but I unreservedly recommend The Mystery of the Peacock's Eye to devotees of Agatha Christie. The story has the feeling of very early Christie, like The Secret of Chimneys (1925) and The Mystery of the Blue Train (1928), but with one of those shimmering plots that defines her 1930s mystery novels.

I'll definitely tackle the other Flynn's on my pile ASAP, but not until early November, because my blogging schedule is filled until then.
Geplaatst door TomCat on 10/15/2019