The Laughing Dog (1949) by Francis Vivian

Arthur E. Ashley was an English circuit lecturer, novelist and a founding member of the Nottingham Writers' Club, who penned eighteen detective novels, published between 1937 and 1959 under the name of "Francis Vivian," many of which are helmed by his cunning, orderly-minded policeman – Inspector Gordon Knollis of New Scotland Yard. One year ago, this month, Dean Street Press reissued the entire Inspector Knollis series and two titles made it onto my best-of list of 2018, The Threefold Cord (1947) and The Singing Masons (1950). 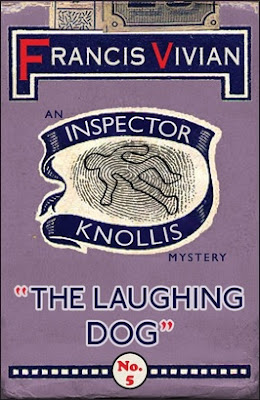 So another one of Vivian's detective novels was lined up for the beginning of this year, enticed by John Norris' twofer review "Two Cases for Inspector Knollis," but hey, my planning rarely pans out. And towards the end of the year is still within the same year as my original plan.

The Laughing Dog (1949) is the fifth entry in the series and I seriously begin to suspect Vivian modeled his detective novels on the "crime of quiet domestic life" Hercule Poirot imagined in The ABC Murders (1936) and worked out by Agatha Christie in Cards on the Table (1936). A murder with a very small, often closely-knit cast of no more than three or four suspects, which tends to complicate matters more than they clarify in an old-fashioned, deftly plotted detective story – one that asks the reader which of the four was it? The Laughing Dog easily stands as one of Vivian's tightest and tidiest plotted mystery novels to date. A novel strong on detection!

The Laughing Dog begins with a prologue, set in Algiers, where a holidaying Dr. Hugh Challoner meets a sketch artist, Aubrey Highton, who discover that each have "a string that vibrates to the same note." A mutual affinity prompting Challoner to offer Highton assistance with landing "a steady job" as a commercial artist when he returns to England. There is, however, a hint that not everything is as it seems on the surface.

Highton sees people "as birds, or animals, or even flowers" and this artistic quirk developed into a revealing, but cruel, style of caricature and depicted Dr. Challoner as a bemused English fox-terrier with its head cocked – "a laughing dog." Highton claimed the image came from "the realm of the subconscious," but the caricature clearly upset Dr. Challoner. And the laughing dog would haunt him all way back to England.

One day, not long after his return home, Dr. Challoner is found dead with a cord around his neck in his surgery and a doodle was found in his desk diary of a dog that "was laughing in human fashion." Highton was one of the last people to see him, but Inspector Gordon Knollis has three other suspects to consider. Mrs. Madeleine Burke was the last patient on the day of the murder and she came to arrange an operation for her teenage son, but Knollis quickly discovers they had more than merely a doctor/patient relationship, which, in turn, provides Dr. Challoner's daughter and future son-in-law with a motive – because Joan and Eric Lincoln would have lost a good chunk of money if they got married. So, there you have it, the entangled intimacy of a quiet, domestic murder with only four suspects that Poirot imagined in The ABC Murders.

John Norris noted in his previously mentioned review that the plot of The Laughing Dog has "a taint of an impossible crime about it," which is sort of true, but not because of any locked doors or windows. There were a number of witnesses, not all of them reliable, who had those exists under observation and there statements often acted as a counter weights to the possible guilt, or innocence, of the suspects. Sometimes these witnesses and suspects were one and the same person. So hardly a genuine locked room mystery. 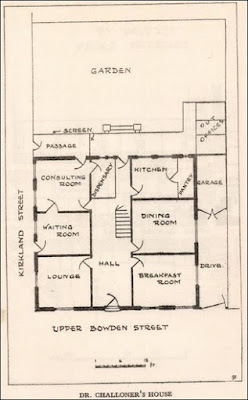 I think The Laughing Dog is best described as a particular well-done, textbook example of the closed-circle of suspects detective story, which kept the circle as tight as possible, with only a handful of candidates for an early morning appointment with the hangman – each with a motive, the means and (more or less) an opportunity to commit the murder. A deceptively simple approach to the traditional detective story, but, when handled with skill, you'll be constantly second-guessing yourself. When you finally think you have figured it all out, you'll find that you have either overlooked or outright rejected the obvious. And this is exactly the kind of trick Vivian managed to pull off here.

Admittedly, there are some (minor) caveats that mainly have to do with the movements of the characters, relaying a little bit on coincidences, but other than that, it was a well-executed plot!

I have already made a comparison between The Laughing Dog and Christie's Cards on the Table, but, after a while, the story began to remind me of one of those closed-circle of suspect stories you often find in mystery anime-and manga series (e.g. Gosho Aoyama's Case Closed/Detective Conan). A short, tightly-plotted detective story set in a house with only a handful of suspects, good, old-fashioned detective work and (visual) clues. A visual clue, of some sort, here are the drawings and doodles of the laughing dog that hound Knollis throughout the story and is what keeps "the outer circle of the problem" shrouded in mysteries. Several months ago, I came across a very similar kind of clue, a drawing of a dog, in Motohiro Katou's "The Fading of Star Map," from the third volume of Q.E.D. Coincidentally, those two stories have more in common than just a visual, dog-themed clue, but let's not tread into spoiler territory.

Obviously, I liked the pure, undiluted detection-oriented and fairly clued of The Laughing Dog, but I would be selling the story short, if I didn't mention Vivian provided some background details about Knollis.

Early in the story, Knollis mentions he has "a wife and two boys." We got a bit more of a backstory in chapter XI, "The Thread of Thought," in which Knollis revealed he had studied mechanical engineering, but "the engineering trade wasn't in a healthy state at that time" and joined the police as an experiment – because he liked taking things to pieces and finding out how they worked. During this time, Knollis learned first hand that people can be "as interesting as machines" and "began to take them to pieces to see how they ticked." You can certainly see this back in the way Knollis grappled with the people and problems that faced him in this story. Knollis also voiced his disapproval of capital punishment on two occasions, but that could have been Vivian bleeding through the character. In any case, a surprising bit of characterization in this plot-focused detective story.

So what more can I add? The Laughing Dog is a solidly plotted, thoroughbred detective novel with a tricky plot, dogged police work, cleverly planted clues and well-drawn characters, which makes it one of my favorite entries in the series. Highly recommended!
Geplaatst door TomCat on 10/11/2019