The Threefold Cord (1947) by Francis Vivian

Early last month, the invaluable Dean Street Press republished the entire Inspector Gordon Knollis series by Arthur Ernest Ashley, who wrote as "Francis Vivian," comprising of ten novels and these new editions are introduced by our resident genre-historian, Curt Evans – one of the leading lights of the traditional detective story's Renaissance period. I previously reviewed the terrific The Singing Masons (1950) and the solid The Elusive Bowman (1951). Only The Sleeping Island (1951) came up short in the end, but this was hardly enough to deter me exploring the series further. 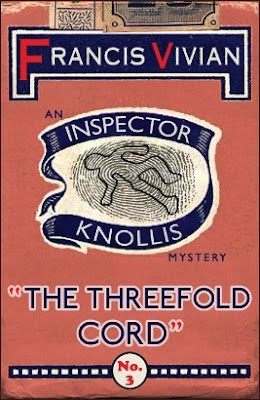 John Norris of Pretty Sinister Books left a comment on my review of The Singing Masons with a delectable recommendation for The Threefold Cord (1947). A detective story with a complicated plot, a Christie-like motive and "a last minute trick" that duped Norris with the finish-line in sight.

I wanted to make The Laughing Dog (1949) my next stop in the series, but his description of The Threefold Cord was too good to ignore. And the story definitely lived up to the promise.

Inspector Knollis is sent down to the town of Trentingham and is instructed to report to the local Chief Constable, Colonel Mowbray, who has requested the assistance of Scotland Yard on an embarrassing problem that concerns an important figure from the nearby village of Bowland, Fred Manchester – an unscrupulous and unpopular furniture magnate. Colonel Mowbray reluctantly explains to Knollis he has been called down to investigate the deaths of Mrs. Mildred Manchester's pets.

Mrs. Manchester had found her pet budgerigar, Sweetums, in the boudoir with its neck broken and "a silken cord tied loosely round its neck." The family cat, Boofuls, was found in the cactus house in similar circumstances. I could practically hear the theme of The Sylvester and Tweety Mysteries playing in my head when the situation was explained, which is why Manchester wanted "a tec from the Yard," because he thinks the local police lacks impartiality on account of him being an outsider and names Sir Giles Tanroy as a potential suspect. Manchester had worked Sir Giles in a tight over a business and he had to sell his ancient family home to the magnate.

Colonel Mowbray thinks Manchester's accusations are nonsense, but Knollis sees a sinister prelude to murder in the manual killing of the pets followed by the looping a blue, silken cord around the broken necks – advises him to stay indoors and keep quiet until they can come around to the house. But an hour later, Knollis is called to the house earlier than he anticipated. Someone had taken an ax to Manchester and nearly "fetched his head from his shoulders."

On a brief aside, I compared Francis Vivian's writing, plotting and series-character with Francis Duncan's detective fiction in my previous reviews, but now they also appear to have been the only mystery writers who referred to "the murder bag."

Duncan's In at the Death (1952) described this murder bag as being filled with "the first-aid equipment of detection," but they forgot about the bag as soon as it was brought up. So I thought it was interesting to see this usually ignored item being mentioned by these two very similar, equally obscure mystery writers. 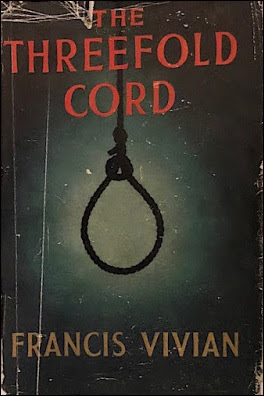 But even without the use of the murder bag, Knollis is in great form here as he cuts through a tangles skein of clues, lies, long-held secrets and a plethora of questions. Such as the symbolic meaning of the blue cords and why the third cord was found crushes in Manchester's outside breast-pocket or the problem of the wandering ax, which went from the woodshed to the scene of the crime and dumped in the gardener's dustbin – wrapped inside a newspaper that had been taken from the sitting-room of the house. And why had this gardener been drugged?

Knollis also has to confront a whole cast of potential suspects at the house. A house, as he observes, full of undercurrents and devoid of love except for "the chauffeur-maid affair," Smithy and Freeman, who are deeply in love with each other. Knollis suspects one of them is shielding the other about something.

Finally, the cast is rounded out by two peculiar guests staying at the house at the time of the murder. Miss Dana Vaughan is a well-known actress who's staying with her close friend, Mrs. Manchester, to mentally recover from an emotionally draining in The Hempen Rope. Desmond Brailsford is Manchester's best friend and had been helping the magnate with finding a ghostwriter to help him write a book on his beloved cacti. Hopefully, this would induce his late friend to sink a couple of thousand pounds in his small publishing firm. But, as always, nothing is as it appears.

So here you have all the ingredients for a fascinating detective story, but then Vivian elevated the whole plot to the next level by introducing a plot-thread about a public hangman who died under questionable circumstances before the war – a local police even believes he was deliberately pushed down a flight of stairs. The chapter detailing this back-story, entitled "Death of a Hangman," is one of the highlights of the book. More importantly, this chapter makes me suspect Vivian was aware of my favorite mystery writer, John Dickson Carr. There's even a character in this back-story, named Sir James Fell, who was the former Chief Constable and covered up this possible murder!

Vivian expertly linked the tale of the dead hangman to all of the suspects and the explanation revealed an intricate web of fear, deceit and treachery, which inevitably lead to the gruesome murder of Fred Manchester. I think inevitable is the key word when it comes to the solution. Every piece of the puzzle fitted together so beautifully, you just want to kick yourself for not seeing the whole picture until it was too late!

The Threefold Cord is a truly excellent and imaginative piece of detective fiction, worthy of being compared to Agatha Christie, and arguably even better than the much touted The Singing Masons. Recommended without reservations!
Geplaatst door TomCat on 11/20/2018