In my review of Douglas Clark's Death After Evensong (1969), I briefly referred to a now obscure, post-WWII mystery writer, Roger Ormerod, who carried on to write detective stories grounded in the traditions of the Golden Age during the seventies and eighties – a period when the genre had moved towards realism and psychology. Somehow, I remembered reading The Weight of Evidence (1978) and More Dead Than Alive (1980) only last year, but my reviews date back to 2017. So it was high time to tackle another one of Ormerod's locked room mysteries!

An Open Window (1988) is the fourth entry in the Richard and Amelia Patton series and the story begins with an explosive opening chapter! 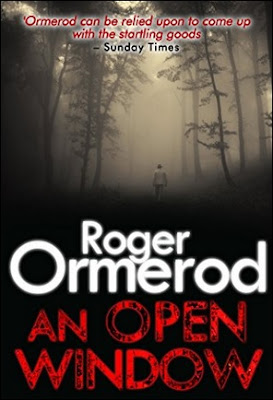 Richard and Amelia have been traveling around England in a fourteen-foot caravan, more out of necessity than pleasure, but they secured a regular spot on a caravan site and arranged with the owner he would try to keep plot 13 empty. When they return, they find a woman has taken their spot. Nancy Rafton had been there for three days and had been making inquiries about Amelia, but Richard learns this after Rafton's caravan explodes – which killed her and put Amelia in the hospital. However, an unexpected windfall swiftly diverts Richard's attention to an entirely different set of problems.

Amelia has an estranged uncle, Walter Mann, who recently died and his solicitor, Philip Carne, tells Richard Mann had altered his will two days before he died. A will that practically disinherited his children, Clare, Donald and Paul, who each get ten thousand pounds.

The residue of the estate goes to his niece, Amelia. This residue comprises of a furnished house, several cars, a portfolio of investments and 51% of the shares in Walter's company, Mann Optics. A factory that makes photographic equipment with an estimated capital value of around half a million. Richard is not only Amelia's acting power of attorney, but a former policeman. And he becomes interested in the circumstances under which Walter Mann died.

Two months before he died, Walter become convinced his family was trying to kill him and not only altered his will as a precaution, but began to lock himself inside a wide, lofty third-floor suite of rooms with a lock on the door that was "virtually un-pickable" – one of only two keys was around his neck on a chain. The second key was in possession of his loyal housekeeper, companion and surrogate mother of his children, Mary Pinson. So when he tumbled from the open window of the third-floor room, through the conservatory roof, everyone assumed it was an accident.

After all, the door of the room had been locked from the inside and the key was still on the chain around Walter's neck. And his dog had been with him in the room. So, if anyone had raised a hand to him, Sheba would have had "it off at the wrist."

The Weight of Evidence and More Dead Than Alive proved Ormerod had an original bent of mind when it came to constructing locked room puzzles. The former handily linked the solution for an impossible disappearance to the presence of two bodies in a bolted, long-forgotten basement room on a construction site, while the latter is a galore of false solutions to the problem of a vanishing magician from a locked tower room. And an unusual true solution. By comparison, the impossible crime from An Open Window is much more conventional and falls squarely in the tradition of John Dickson Carr, G.K. Chesterton and Edward D. Hoch. So the locked room-trick still has some flashes of imagination, but there were parts that were slightly unconvincing and the clue of the blood in the conservatory was unfairly withheld from the reader. Richard also missed two obvious possible (false) solution for the locked room. 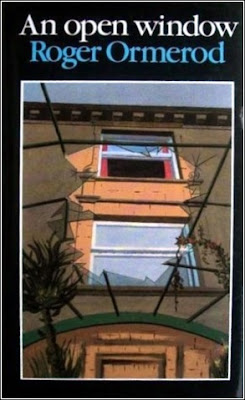 So, purely as a locked room mystery, An Open Window is decent enough, but hardly outstanding or noteworthy. However, I do think the trick would probably have worked better in a short story or novella.

The murder of Walter Mann was not the only death in the family. Three months previously, Clare's husband, Aleric Tolchard, fell down an iron staircase at the factory and broke his neck, but the local police are treating his death as a potential homicide – eyeing Chad Leyton as the main suspect. Chad is the son of Walter's best friend and shareholder, Kenneth Leyton, and the boyfriend of Philip Carne's sister, Heather. All three were present at the factory when Aleric fatally tumbled down those stairs, but only Chad has a strong motive. A dispute over a brand new innovation in 3D photography Chad had developed in the photographic laboratory of Mann Optics. This reminded me of the revolutionary new formula for color photography from Maurice C. Johnson's sole locked room novel, Damning Trifles (1932), but here the 3D photography was merely used to provide one of the suspects with a motive.

So probably assume by now that I was completely unimpressed and An Open Window is certainly the weakest of the three I have read, but the story was not entirely devoid of merit.

An Open Window is completely focused on disentangling the various plot-threads and Richard has to be persistent to get even an atom of truth out of the suspects, because they either lie to his face or avoid him all together. There are very little side-distractions. The locked room-trick may not have shown the same ingenuity as in his previous novels, but the way in which he handled the altered will did have that spark of originality. Why the murder was committed two days after the change, is one of the central questions of the plot. Finally, Ormerod skillfully dovetailed the solutions of the explosion, the death at the factory and the locked room murder together.

An Open Window is an unevenly plotted, slightly overwritten and not always fairly clued detective novel, but the unwavering focus on the plot and some clever plot ideas balanced out some of its flaws – making it a serviceable, instead of a terrible, detective novel. So don't make this your first brush with Ormerod, but don't cross it off your list in case you like his work.

On a final, related note, Ormerod is listed in Robert Adey's Locked Room Murders (1991) with three titles, A Spoonful of Luger (1975), The Weight of Evidence and An Open Window, but Adey missed More Dead Than Alive and And Hope to Die (1995) was not published until four years later. Recently, I found Ormerod wrote at least two more impossible crime novels, One Deathless Hour (1981) and A Shot at Nothing (1993), and there may be more! This makes him a notable locked room novelist during a period when impossible crime mostly figured in short stories. Yes, I'm going to take a look at all of them... eventually.
Geplaatst door TomCat on 10/29/2019