Going for a Stroll: "The Stalker in the Attic" (1925) by Edogawa Rampo

Recently, I read the very first Japanese locked room mystery, entitled "D zaka no satsujin-jiken" ("The Case of the Murder on D. Hill," 1925), written by the father of the Japanese detective story, Edogawa Rampo, who penned it as a response to the critics of his time – who asserted that it was impossible to use the open, wood-and-paper houses of Japan as a stage for a Western-inspired mystery. Rampo proved them wrong by writing a short locked room story set in a traditional Japanese house with paper walls, sliding doors and tatami-matted floors. 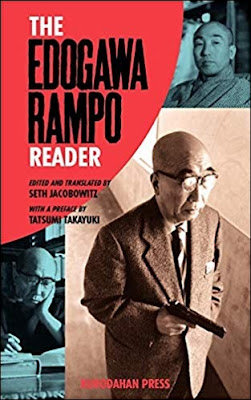 Historically, "The Case of the Murder on D. Hill" is an important cornerstone of the Japanese detective story and handed a blueprint to both his contemporaries and successors to follow, but, purely as an impossible crime story, it's not really impressive. Rampo merely showed it was possible to stage a locked room murder in a wood-and-paper house without showing any ingenuity in the solution. Something he would rectify in another story from the same year.

"Yaneura no sanposha" ("The Stalker in the Attic") was originally published in the August, 1925, issue of Shin-Seinen and a translation was published in a collection of short stories and essays, The Edogawa Rampo Reader (2008), which gave 1926 as the story's original year of publication – which has to be wrong. The story is an inverted locked room mystery and remarkably modern in its subject matter.

Gōda Saburō is a restless, ennui-ridden and perpetual bored twenty-five year old man who left "no stone unturned in his search for amusement." A generous allowance from his parents allowed him to act with "reckless abandon" and regularly changed lodgings. There were two events that placed Gōda on the path of murder: one of them was becoming acquainted with Rampo's famous amateur detective, Akechi Kogorō, whose "wealth of fascinating crime stories" entertained Gōda. Akechi seemed to take an interest in his pathological personality.

The second event was discovering that the closet in his room, in a recently built boarding house, has a panel in the ceiling giving access to a normally inaccessible attic!

Tōeikan boarding house encircles a courtyard to form a square and the attic follows this shape, which means Gōda can walk around in a circle and return where he started, but the cherry on top is that the boardinghouse was "shoddily built" and the ceiling boards are riddled with gaps and knotholes – giving him a thrilling opportunity to spy on his neighbors. You read that right. A 1920s detective story about voyeurism and genre historians might want to take note of this story, but I'm unrepentant Golden Age detective fanboy and there were other features of the plot that fascinated me.

Firstly, there are the architectures features which are integrated into the plot in the tradition of the finest Golden Age detective stories.

"The Stalker in the Attic" solved the problem Rampo addressed in "The Case of the Murder on D. Hill" by merging the traditional Japanese houses with a Western-type building. The Tōeikan boarding house has sleek, sturdy walls of painted wood and doors fitted with "metal locks," which allowed for more privacy, but the interior of the rooms very much resembled a traditional Japanese house – especially when seen from above as "every item in the room is framed by tatami mats." Secondly, the movement of Gōda during his so-called "attic walks" is fascinating as he freely moves around the squared circle and spies on his fellow boarders in their rooms on the second floor. During one of his excursions, Gōda changes on a way to commit the perfect murder inside a locked room. 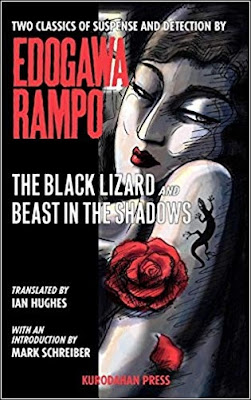 Gōda absolutely detests one of his fellow boarders, Endō, but, when he discovers the open mouth of the loudly snoring Endō lies smack dab under a knothole, he realizes the criminal potential of the situation. He can drip poison along a drawstring into his wide, open mouth and push a small bottle of poison through the knothole. Endō always locked his door and window before going to bed, which made it "impossible for someone to enter from the outside" and made his untimely death appear like a suicide.

So, purely as an impossible crime story, "The Stalker in the Attic" is not only the first truly Japanese locked room mystery, but the direct ancestor of the bizarre architecture so often found in the modern shin honkaku detective novels.

The way Rampo integrated the features of the boarding house into the plot reminded me of Soji Shimada's Naname yashiki no hanzai (Murder in the Crooked House, 1982), Yukito Ayatsuri's Jakkakukan no satsujin (The Decagon House Murders, 1987), Szu-Yen Lin's Death in the House of Rain (2005) and the many stories from The Kindaichi Case Files – e.g. The Alchemy Murder Case, The Prison Prep School Murder Case and The Antlion Murder Case. I was also reminded of Max Rittenberg's 1914 short story "The Invisible Bullet," collected in The Invisible Bullet and Other Strange Cases of Magnum, Scientific Consultant (2016), which deals with an impossible murder in a fencing academy situated on the top floor of a tall building. The way in which the layout of buildings are used in service of the plot and the original locked room-tricks showed that Rampo's "The Stalker in the Attic" and Rittenberg's "The Invisible Bullet" were ahead of their time in their respective regions. I seriously wonder if Rampo, who could read English, was aware of this particular story.

Akechi Kogorō appears on the scene in the final ten pages of the story to play a little cat-and-mouse game with Gōda, but this merely to give the story, which has already been told by this point, a tidy ending.

So very much like my rereading of Akimitsu Takagi's Shisei satsujin jiken (The Tattoo Murder Case, 1948), I appreciated "The Stalker in the Attic" a whole lot more the second time around. An important and well-done story that ought to be better known among a Western (locked room) mystery readers. Highly recommended!

A couple of notes for the curious: "The Stalker in the Attic" is the only good story collected in The Edogawa Rampo Reader, but the essays are really interesting and recommend "Fingerprint Novels of the Meiji Era," "Dickens and Poe" and "An Eccentric Idea" to every genre historian/scholar. Secondly, there's a Western hybrid of the detective and horror story, namely Ed Bryant's "The Lurker in the Bedroom" (1971), which reads like it was inspired by Rampo. Lastly, I clearly remember there was a floor plan of the boarding house, showing the attic route, but apparently, my memory deceived me. There's no floor plan.
Geplaatst door TomCat on 10/04/2019