A Melee of Miraculous Mysteries

Years ago, I compiled a list, entitled "My Favorite Locked Room Mysteries II: Short Stories and Novellas," which covered, as one of the comments pointed out, impossible crime tales from the well-known locked room anthologies amalgamated with a handful of more obscure stories – such as Robert Arthur's unsung classic "The Glass Bridge" (collected in Mystery and More Mystery, 1966). I wanted to update this list for years, but simply had not enough material at my disposal to expend on it. 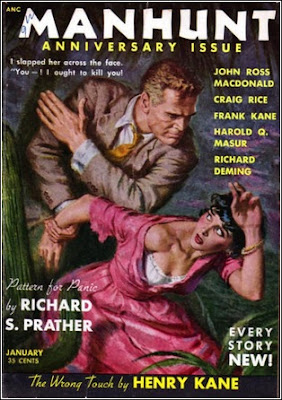 So I have been discussing more short story collections and single short stories on this blog, which has brought some gems or interesting curiosities to light. I'll be drawing on these reviews when I have read enough to finally update the list. This blog-post is meant to reduce the glut of single short stories clogging my pile of unread detective stories. I'll be going through them in the order I have read them.

Craig Rice's "...And Be Merry" is a short-short story of three pages, originally published in the January, 1954, issue of Manhunt and confronts John J. Malone with the impossible poisoning of Alma Madison. She was found dead in a locked dinette, but Captain von Flanagan, of Homicide, told Malone they had been unable to find even "a trace of cyanide in that whole apartment." The victim was under treatment of a psychiatrist and the explanation hinges on her eccentric behavior. An unusual short-short impossible crime story, but, sadly, also a very forgettable one.

Charles Larson's "Mail Me My Tombstone" appears to have been only published in the April, 1943, issue of Ten Detective Aces and is not listed in Robert Adey's Locked Room Murders (1991).

Jim is a happily married writer of detective stories, but "the mad jangling" of the telephone briefly turns his life upside down. An old flame, named Rita Manning, has been arrested for the murder of her husband, Steven Loring, who was "a big-time gambler," but Rita tells him she was with her mother when three witnesses heard gun shots from inside the house – she wants Jim to solve the murder by posing as her lawyer. A complicating factor is that the house was securely locked and bolted from the inside with the sooth in chimney undisturbed. A minor, but pleasant, story with a solution obviously derived from a famous short story and the locked room-trick is a slight modification of an age-old trick.

Ed Bryant's "The Lurker in the Locked Bedroom" was originally published in the June, 1971, issue of Fantastic and blends fantasy, horror and contemporary crime fiction with a psychic detective and a classic locked room scenario – which was somewhat reminiscent of Edogawa Rampo (e.g. "The Human Chair" and "The Stalker in the Attic"). Aleister Houghman is called to the Swithit Hotel for Young Ladies where three young women have been assaulted and raped in Room 491, but the door of the room has "a latch, a safety chain and two bolt-type locks." So how did the perpetrator managed to get to the women? The solution is a pure, undiluted fantasy with a great and darkly humorous take on a classic trope of the horror genre, which kind of disqualifies it as a locked room mystery. However, it certainly is a memorable treatment of the impossible crime story. 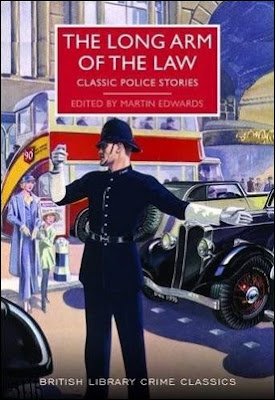 E.C.R. Lorac's "Remember to Ring Twice" is one of the few short stories she produced, originally published in 1950 in the Evening Standard, which was finally reprinted in the anthology The Long Arm of the Law (2017).

Police Constable Tom Brandon overhears a conversation in the bar of The Jolly Sailor about five hundred pounds, an elderly aunt and being "fed up lookin' after the old lady." A week later, P.C. Brandon is walking his beat when this conversation comes floating back to him when, behind the locked front door of a house, he hears "a faint scream and a series of heavy thuds." The front door is unlocked and they find the elderly aunt at the bottom of the stairs with a broken neck. Unfortunately, the story was way too short to play and the solution too technical to be completely fair with the reader, but it certainly was a good police story. I liked it.

The next story I read was Harry Kemelman's "The Man on the Ladder," collected The Nine Mile Walk and Other Stories (1968), which everyone appears to like, but I didn't care for it at all. The quasi-impossible situation is a man falling to his death from a roof and the murderer has an iron-clad alibi, but the solution was infuriatingly obvious. And this made the second half a drag to read.

Finally, Eric Ambler's "The Case of the Overheated Service Flat," originally published in the July 24, 1940, issue of The Sketch and is one of only half-a-dozen short stories about the refugee Czech detective, Dr. Jan Czissar – who's a thorn in the side of Assistant-Commissioner Mercer. In this story, the police is trying to hook a notorious wife-killer, Thomas Jones, who prematurely buried three wives after they tragically died from carbon-monoxide poisoning. These deaths have left him a man of independent means, but the first two deaths have been shelved as unfortunate accidents. And the police really want to nail him for the murder of his third wife. Only problem is how to proof it.

The premise of the story is very similar to Arthur Porges' "The Scientist and the Wife Killer," collected The Curious Cases of Cyriack Skinner Grey (2009), which even has a clever, science-based solution that you would expect from Porges! I really liked this tale and you can expect me to return to this series at some point in the future.

So, all in all, this medley of impossible crime stories was the expected mixed bag of tricks, but I'm glad I can now cross them off my locked room column of my to-be-read list. I'll try to pick a non-impossible crime novel for my next read.
Geplaatst door TomCat on 4/10/2019