Murder in the Future: "The Closed Door" (1953) by Kendell Foster Crossen

A week or two ago, Mike Gray of Ontos posted a notice on his blog, titled "Certainly It Was Impossible," which highlighted an obscure short science-fiction story that was published in a 1953 issue of Amazing Stories and the plot description promised a traditional detective yarn set in the 22nd century – complete with a locked room murder and an old-fashioned detective. I have to say, I was not disappointed by what I read.

Kendell Foster Crossen was a reviewer and writer of popular fiction, under a battery of pennames, who has strong ties to the locked room sub-genre. John Norris, of Pretty Sinister Books, reviewed The Invisible Man Murders (1945) and The Case of the Phantom Fingerprints (1945), but Robert Adey listed two additional titles in Locked Room Murders (1991). 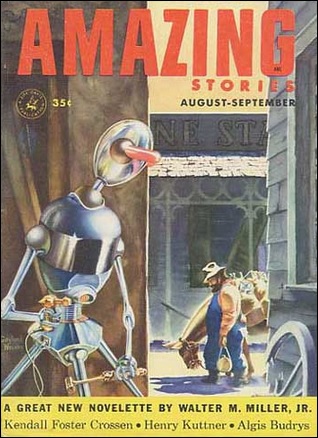 However, Adey apparently overlooked a short story, "The Closed Door," that appeared in Amazing Stories. A genuine impossible crime story with a dying message and an original solution, grounded in science-fiction territory, but with an old-fashioned twist that harked back to our own time – even one of John Dickson Carr's famous detective characters gets a mention ("If Gideon Fell could have lived to see this..."). My only quibble is that this story would have worked better, as a detective story, had it been a novella or even a novel-length story, because it would have given Crossen the opportunity to fully explain the science behind this universe.

A better understanding of the science, behind the science-fiction, would have given the reader an honest shot at working out the locked room trick for themselves, which is a combination of old-fashioned trickery and futuristic treatment of plastic. Like a 22nd century version of an Arthur Porges locked room story. But this really should have been a longer story to do full justice to the plot. And it would bolstered the fair play element. Anyway, the story is still pretty good for what it is.

The setting of "The Closed Door" is set at the Planetary Rest Hotel, which is the only hotel in the universe capable of "catering to every life form in the galaxy," because the entire building is constructed out of "two hundred and seventy-three different plastics." So even the extremely radiating Mercurians can stay there and one of the passing the locked room, around the time of the murder, turns out to play a key in the solution! One of those clever little cheeky things that you can get away in science-fiction detective.

At the time of the story, the Planetary Rest Hotel is hosting The Galactic Acrylic Convention and the over-worked manager, Alister Chu, receives a disturbing call on his visiphone from the hotel's most important guest, Mr. G.G. Gru – a silicon-based Terran from Sirius II. Gru tells Chu that he can't abide practical jokers and orders him to come to his room immediately, but than all of a sudden, Chu sees Gru shaking on the screen, as if he's falling apart, and falling over. The last thing Chu saw on the video screen was a gloved hand turning off the transmission.

As per Gru's instructions, the door of his room was replaced with a special Plexilite door that has been fitted with "a palm-lock keyed to the atomic structure of the guest." Only he could lock, or unlock, that door without damaging it. Inspector Jair Calder, of Planepol, has to blast open the door with a hydrocarbon gun and inside they find Gru slumped across his desk in front of the visiphone screen. A torn piece of paper is found with "a crude drawing of a six-sided figure and the letters COO," but most of this dying message has been made off with by the murderer. Only question is how the murderer managed to get past a door only a dead man could have locked behind him?

The solution to the impossible murder has a foot firmly planted in two genres. On the technical side, the explanation is pure science-fiction and I know this is not very popular with everyone out there, but Crossen succeeded in pouring this science-fiction plot in the mold of the traditional detective. I also appreciate how the trick was not used as a simple, throw-away answer as to how to get pass a locked door, because the murderer still had to do some considerable work. And rely on some misdirection. But even more than that, I loved how this futuristic locked room trick hinged on a then historic item that is a normal, everyday object in our own time. You know when you read it.

On the downturn, the dying message is unsolvable and the identity of the murderer, alongside the motive, is not as inspired as the impossible crime, but I blame the short length of the story for that. As a short (locked room) story, it was already better than Manly Wade Wellman's Devil's Planet (1942), which also deals with a locked room murder in space, and expanding the story might have resulted in something comparable to Isaac Asimov's The Caves of Steel (1954) – i.e. a minor gem.

So, "The Closed Door" is a good example of how a detective story can be resettled in a science-fiction universe and an excellent demonstration how even speculative technology opens up, instead of closing down, new avenues for mystery writers who know how their way around a plot.

You can read and judge the story for yourself here or, in two parts, here and here.
Geplaatst door TomCat on 2/24/2018