Murder and Magic: "A Stretch of the Imagination" (1973) by Randall Garrett

Last week, a positive review of Randall Garrett's Too Many Magicians (1967) appeared on Mysteries Ahoy, which was voted by a 1981 panel, spearheaded by Edward D. Hoch, as one of the fourteen all-time greatest impossible crime novels, but personally, I thoroughly detest the infernal book – giving it spot on my 2014 list of "Least Favorite Locked Room Mysteries." So, naturally, I was balking in the comment-section how awful the book really was when "JJ," of The Invisible Event, dropped by with an astonishing claim. 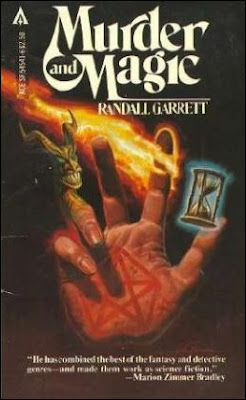 According to JJ, the short stories in the Lord Darcy series are "variable" in quality, but the one where "a man is found hanged in his office," despite no-one having gone in, contains "a trick so devious" he'd probably put it in his top 20 locked room short stories. I happened to have a complete omnibus edition of Garrett's Lord Darcy collecting dust on my shelves, which made it even more tempting to give this series a second shot by taking a look at "A Stretch of the Imagination."

So damn you, JJ, for making me return to this series and I'll damn you again at the end of this review, if the story turns out to be really good.

First of all, an introduction of the series in order for the people who are not familiar with Garrett's Lord Darcy, because the books merged the fantasy genre with the traditional detective story. And as much as I dislike the sole novel in this series, Too Many Magicians, I do admire Garrett's attempt to transplant the fair play concept of the classical detective story to a world rife with wizards, spells and the black arts – which makes for an interesting alternative universe.

In this alternative universe "Richard the Lion-Hearted did not die in the year 1199," but went on "to found the mightiest and most stable empire in history" where "the laws of Extra-Sensory Perception (ESP) have been codified." However, the laws of physics remain unsuspected. So in this world "magic is a science."

The greatest detective of this Anglo-Franco Empire is Lord Darcy, Chief Criminal Investigator for His Royal Highness, Richard, Duke of Normandy and Officer of the King's Justice, John IV, King and Emperor of England, France, Scotland, Ireland, New England and New France, King of the Romans and Emperor of the Holy Roman Empire. Imagine the printing costs of his personal calling cards!

Lord Darcy is assisted by Master Sean O Lochlainn, Chief Forensic Sorcerer, who always struck me as a convenient plot-device to eliminate the use of magic from the list of possible solutions or use his magic wand to uncover clues.

The story JJ spoke so highly of is "A Stretch of the Imagination," originally published in Of Men and Malice in 1973 and collected in Garrett's Murder and Magic (1979), which takes place within the walls of one of the most important publishing houses in Normandy, Mayard House, where staff members heard a thump and noises through the thick doors of the private-office of Lord Arlen – who owns the publishing house. However, nobody dares to enter the office until the Chief Editor, Sir Stefan, takes the charge and enters the private sanctum of his boss.

Lord Arlen was hanging by his neck from a rope that been thrown over a massive wooden beam and below his feet was an overturned chair. Nobody had entered, or left, the office in over an hour. So clearly a case of suicide, but, whenever a member of the aristocracy dies violently, an Officer of the King's Justice has to make a formal inquiry. Enter Lord Darcy and Master O Lochlainn. 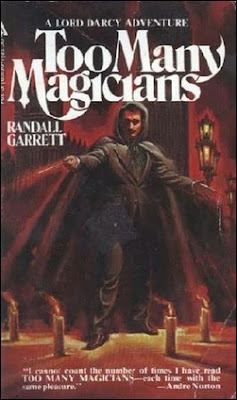 Master O Lochlainn is waving "a small golden wand" around the crime-scene and senses that "there was no one else in the room at the time he died." He was also able to eliminate the possibility of an evil influence or the use of black magic in the room. Later on in the story, O Lochlainn casts a spell on the rope used to hang Lord Arlen and it sprung to life to retie itself in the slip-knot noose that the murderer had originally tied. I know wizardry is an established science in this universe and Garrett never uses magic as a solution, but I did not care for these magical intrusions in my detective story.

I guess fantasy just isn't my genre, which is weird, since my all-time favorite novel is Michael Ende's The Never-Ending Story (1979).

Luckily, this time, the plot was far more inspired than the boring, slow-moving Too Many Magicians, which borrowed its locked room idea from John Dickson Carr, but here the reader is treated to a novel explanation as to how the murderer managed to hang a man, all alone, inside a closely watched office – based on a crushed larynx, height of the chair and a slightly open window. A type of trick you'll often find in Gosho Aoyama's Case Closed series (e.g. the hanging story from Vol. 57).

Considering my disdain for this series, I was pleasantly surprised that the story, as a whole, turned out to be pretty solid with an original solution for its impossible crime. I'm not sure it would make my top 20 list, but the story was good one. Although the locked room-trick would probably have been better served in a detective story without all the magic trappings. However, that is a bit of nitpicking on my part.

So that leaves me with one last thing to say: double damn you, JJ, for not being entirely wrong about "A Stretch of the Imagination." You may continue to practice as locked room expert. For now, anyway.
Geplaatst door TomCat on 2/14/2018