They Walk in Darkness (1947) by Gerald Verner

Gerald Verner's They Walk in Darkness (1947) is the second novel in a very short-lived series about a thriller writer and his wife, Peter and Anne Chard, who debuted in Thirsty Evil (1945) and rapidly descended into the catacombs of obscurity after their second outing – which was only dimly remembered as a locked room mystery. Astonishingly, this obscure, barely remembered detective novels reprinted three times in the past ten years! 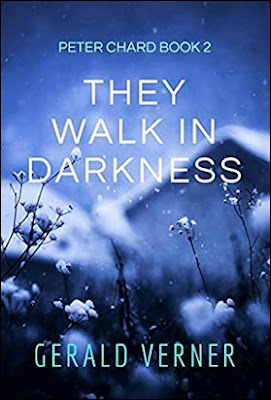 Ulverscroft published a large print edition in 2011 as part of their Linford Mystery Library and Ramble House reissued the book in hard-and paperback in 2016, which was followed this year with an ebook version from Endeavour Media.

Regrettably, these various reissues seem to have done precious little to bolster the profile of the book and that's a shame, because honestly, it's one of Verner's best detective/thriller stories – certainly of the handful of titles I've read to date. I believe this has to do with the fact that Verner gave himself the space to tell the story. They Walk in Darkness is twice as long as, for example, The Royal Flush Murders (1948), Noose for a Lady (1952) and Sorcerer's House (1956), which showed Verner was closer aligned with the pulp-style thrillers than with the pure Golden Age detective stories. Verner evidently attempted here to write something more in line with the traditional mystery novel. Something that's more evident in the first than the second half of the book.

They Walk in Darkness opens on a cold, snowy evening, in late October, when the Chards are traveling to a small, East Anglia village to visit a close relative of Peter, Aunt Helen.

Fendyke St. Mary used to be "a hot-bed of witchcraft in the Middle Ages" and "the abominable orgies of the Witches' Sabbath," attended by Satan himself, were regularly practiced at a place known as Lucifer's Stone. There's also an old, derelict cottage, Witch's House, which used to belong to leading light of "a particularly virulent coven" and was burned to death in 1644. So with such a long, ancient history and tradition in devil worship, it's hardly surprising many villagers are only too ready to explain anything "strange and inexplicable" as witchcraft. A belief they apply to the terrors that has plagued the village for the better part of two years.

During a dinner party, Peter and Ann learn that a child murderer is roaming the village, but "the prelude to the baby murders" was the theft of several lambs, at various intervals, which were found back as cadavers – all of them had their throat savagely cut. And then the children began to disappear. One of them was taken from his pram in the garden and another never returned home for tea, but their bodies were eventually found in clumps of reeds somewhere on the edge of Hinton Broad. Only suspect the police has seriously considered is a mentally undeveloped man, Tom Twist. 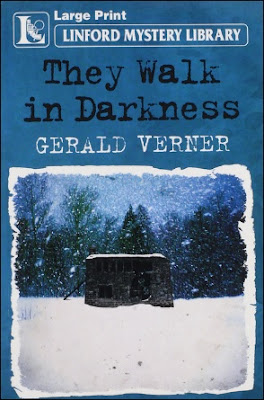 However, the dinner party's response to the wanton child killings going on in the village is extremely cool, level-headed and very British. They shake their heads in disapproval, mutter something about a maniac and chide the local police for their lack of progress.

John Norris, of Pretty Sinister Books, reviewed They Walk in Darkness back in March and commented on the British stoicism of the characters "this wholesale murder of helpless children." I left a comment suggesting he read Paul Halter's L'arbe aux doigts tordus (The Vampire Tree, 1996) and compare it with Verner's They Walk in Darkness, but had no idea at the time how apt my comparison really was.

The Vampire Tree is also set in a small village with a dark, bloody history and has become the playground of serial killer targeting children. This killer has pretty much the same modus operandi as the child murderer from Fendyke St. Mary and the characters have the same cool, detached response to the murders as they do here. I remember the children in Halter's story were allowed to continue to roam the woods, where the bodies were found, but Verner was even colder and had one of his characters suggest they use one of the village children as living bait ("like the old hunter's trick, eh?") by leaving the child in a lonely spot under discreet observation – a "tethered kid to attract the lion." One of those subtle hints that the English are, in fact, completely insane. The only reason they have been able to hide it so well is that they happen to share this continent with the French and Germans.

There's also the curious coincidence that both They Walk in Darkness and The Vampire Tree have characters named Twist and an impossible crime of the no-footprint-in-the-snow variety.

After the Eve of All-Hallows, a group of four people from Fendyke St. Mary briefly go missing from their home and their bodies are found, seated around "a very old worm-eaten table" laid for five people, in the dirty Witch's House. They sat "strangely contorted" with their eyes turned towards the empty chair at the head of the table with an "expression of horror." A considerable quantity of cyanide was found in the wine glasses and one of the bottles, but the cottage had been locked and there were four tracks in the snow outside. However, the tracks only went in the direction of Witch's House, but there was none coming back! 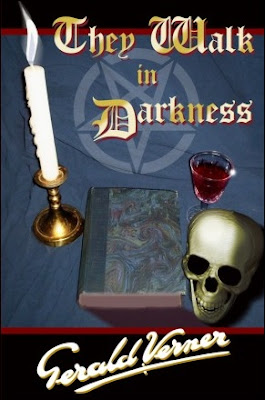 So, this situation presents the Peter and Ann with two possibilities, which are both utterly impossible: the four people either committed suicide and the door magically locked itself, before the key miraculously vanished, or there was a fifth person present in the cottage – who somehow managed to lock the door and disappeared with the key from "a house surrounded by snow without leaving any tracks." An intriguing premise and the solution was only slightly soiled by the clumsily handling of an important clue, which has always been weakness of Verner. Yes, "the snow trick" is not terribly original and have come across a very similar solution recently, but, somehow, I didn't mind that here. That has very much to do with the identity of the murderer and strong motive.

I thought I would never come across characters more deserving of murder than the "victims" from Nicholas Brady's The Fair Murder (1933) and Agatha Christie's The Murder on the Orient Express (1934), but Verner served his reader four of such human abominations. This aspect reinforced many of the weak points of the overall plot and held the story together in the end.

The no-footprint-in-the-snow is, as mentioned above, hardly a classic of its kind and the second half of the book is written in the lurid style of the sensational, pulpy occult thrillers littered with adjectives (beastly, blasphemous, diabolically, horrible, etc), but the murderer and motive made up for a lot. I thought the vigilante mob scenes and the Biblical event that ravaged the region towards the end was a nice touches to the story.

They Walk in Darkness stands as one of the darkest, highly unconventional and spellbinding village mysteries, written by a professional story-teller, but not everyone is going to appreciate what Verner tried to accomplish here – either because the plot has its weaknesses or the unpleasant subject matter. This makes hard to unhesitatingly recommend the book to everyone. That being sad, if you liked Gladys Mitchell's The Devil at Saxon Wall (1935) and Ellery Queen's The Glass Village (1954), both equally unconventional, you'll probably find They Walk in Darkness a fascinating and rewarding read.

And on a final, related note: when reading the book, I came up with an alternative solution to the impossible murders in Witch's House. An alternative solution that in no way resembles the actual explanation and wanted to share it with you. My solution placed two people inside the cottage, before the snow began to fall, which are the murderer and one of the four victims. They are preparing the cottage for their devil's banquet. When the snow stops falling, the other three arrive and, when they're dead, the murderer leaves the cottage by walking backwards – creating a fourth track of prints in the snow. Yes, I know walking backwards in the snow is an old, tired and hacky trick, but, usually, this trick is done by retracing a previously created trail of footprints. In this case, the murderer leaves an untempered track that's simply misinterpreted.
Geplaatst door TomCat on 12/06/2019