John Pugmire of Locked Room International published an English translation of Paul Halter's L'arbe aux doigts tordus (The Vampire Tree, 1996) in December, 2016, but decided at the time to give the book a pass, because I remembered a damning review that was posted on the now erstwhile forum of the JDCarr website – lambasting everything from the weak plot to the illogical behavior of the cardboard characters. So even at the time, when Halter was still an inaccessible enigma behind the language barrier, I was not enticed by this particular title. 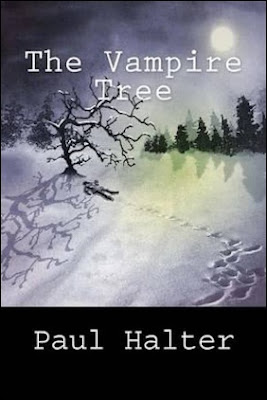 My initial plan to give The Vampire Tree a pass began to fell by the wayside shortly after reading La chambre du fou (The Madman's Room, 1990), which was a good take on the "room that kills" and actually left me wanting to read another Halter. And that left me with only one option.

So how bad could the book really be, I reasoned. After all, I also recall some negative reviews of Carter Dickson's Behind the Crimson Blind (1952) that suggested the entire plot consisted of H.M. chasing prostitutes and stabbing dodgy, low-life characters in the streets of Tangier – which you have to agree is an unfair assessment of the book. Sure, Behind the Crimson Blind is still at the bottom of the H.M. series, alongside with And So to Murder (1940) and Seeing is Believing (1941), but it was still very readable mystery. I had the hope that this much maligned title by Halter would turn out to have a similar upside.

Well, that was not the case and somewhat regret my decision. The Vampire Tree is almost as poor a detective story as Le roi du désordre (The Lord of Misrule, 1994). Yes... this is going to be one of those reviews.

The Vampire Tree does have all the necessary ingredients of an arch-typical Paul Halter detective novels, "legends, witches, ancient crimes, sadism, premonitory nightmares," while the past and present begin to inextricably intertwine. Naturally, one of the crimes is of the seemingly impossible variety and occurred a hundred years before the opening of the story. Unfortunately, Halter was unable here to produce the same result as he did in previously mentioned The Madman's Room or L'image trouble (The Picture from the Past, 1995). But let's begin at the beginning.

The main story-line takes place in the 1950s and concerns a newlywed couple, Roger and Patricia Sheridan, who were world's apart, but had one thing in common – neither of them had any close relatives. Patricia was orphaned during the London Blitz during the Second World War and Roger inherited "a comfortable future" from his wealthy parents. An inheritance that included the remnants of an ancestral mansion that stands in the village of Lightwood, in Suffolk, which Roger fixed up to serve as "the cosy nest of their dreams." However, the place has a peculiar history of its own that will come back to haunt them.

During the reign of Henry VIII or his son Edward, the village was plagued by "a series of child murders" and the person who was held responsible was an apparently young and beautiful woman. Liza Gribble had the face and body of a young woman, but the wrinkled hands of an old crone. So the villagers assumed she was not only witch, but a vampire as well and she had drank the blood of her victims to become a youthful-looking woman again. Gribble was hanged and buried beneath the titular tree. A tree that stands on the grounds of the Sheridan residence and played a role in another murder case that took place a hundred years ago. 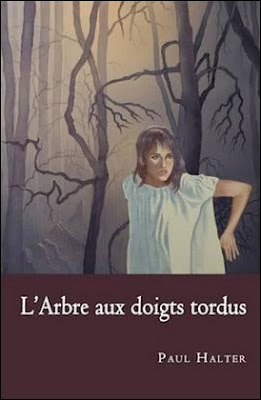 One of Roger's great-grand-uncles, Eric, became engaged to the daughter of a neighboring landowner, Lavinia, who died mad when Eric was murdered under seemingly impossible circumstances. On a harsh winter evening, they threw a ball at the Sheridan home and it was a great success, but when Lavinia went to sleep that night she had a terrifying nightmare about the menacing, twisted tree coming alive and strangling her fiancé, which became reality when she found his body the following morning sprawled beneath the tree – strangled him to death. But the peculiar, inexplicable part is that there was only a single set of footprints in the virgin snow and they belonged to Eric!

Patricia had a similar nightmare the first time she slept in the house and decided to read Lavinia's diary, which becomes somewhat of an obsession and she's not the only one. Roger begins to develop a habit of calling her Lavinia. And then there's the present-day murder case. A serial killer who targets children, slits their throats and disposes of their drained bodies in the wooded area surrounding the village.

On paper, The Vampire Tree had all the potential to become a good, if not excellent, detective novel, but Halter evidently did not have his head in the game and was unable to bring any of the plot-threads to a satisfying conclusion. And this exemplified in the ineptitude of Dr. Alan Twist and Inspector Archibald Hurst. You've to wonder why Halter decided to include them, instead of making this a standalone novel, because they're completely useless here. Twist even admits towards the end that he considers "the case to have been one of my failures" and he only got "a glimpse of the truth."

Only contribution Twist made to the case was explaining Patricia's phobia of bright lights and why she had an "insurmountable fear of touching crosses," but it was Patricia who eventually hit upon an explanation for the impossible murder that occurred there over a century ago – which (alas) was an extremely poor one. I also loath this type of solution for any kind of locked room murder or impossible crime. I'd rather a writer use hidden passages, poisonous animals or a long-lost twin to explain a miraculous murder than spring this kind of explanation on me. An explanation that completely destroys the essence of an impossible crime. On top of that, it was also badly executed, poorly motivated and required some (natural) fortuity to work.

So I was not exactly impressed by the impossible crime element of The Vampire Tree and was even surprised that Pugmire, who specializes in publishing locked room mysteries, picked this one to translate. I'm sure it has something to do with publishing rights, but this is the kind of book that would chase away new readers who picked up because the title sounded intriguing. 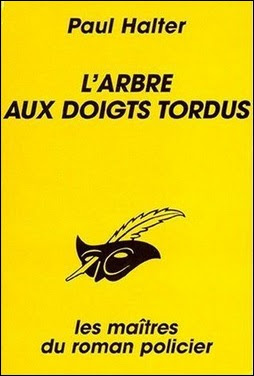 Anyway, the plot-thread of the present-day serial killer proved only to be slightly better, but not much, which had an interesting motive that was actually foreshadowed and this allowed the reader to make an educated guess about the murderer's identity. Not exactly old-fashioned fair play, but Halter did drop a couple of good hints and (admittedly) the reason why the killer drained the children of their blood showed Halter could be clever and original. As did the double-alibi of the murderer. However, this was hardly enough to save the book and there's another thing about the solution that annoyed me more than anything else in the story.

Early on in the book, Patricia meets an elderly man on the train, Thomas Fielding, who travels to historical or haunted places in order to soak in the atmosphere and this personal interest helped him to "formally identify the perpetrator" – or, rather, he "sensed" the truth. However, Fielding only went around telling people he knew who was behind the child killings, but the only precaution he took was sending a letter to Dr. Twist. A letter that arrived too late, but here's the kicker: in the letter he told Twist he fully expected to be murdered by the man he had refused to tell everyone about. He actually suspected this person to silence him and he let it happen without lifting as much as a finger. And even worse, his death did nothing to help capture the murderer. What an idiot.

I believe the last time people vainly sacrificed themselves, like that, was when Aztec men mounted the steps of the Great Pyramid of Tenochtitlan to voluntarily have their hearts cut of their chest in an attempt to stop the Spanish conquest.

So, to make a long story short, I very much disliked The Vampire Tree. Halter has always been an uneven mystery writer and plotter, who tends to divide opinions, but The Vampire Tree is far below the dozen, or so, titles that preceded it in translation. Halter can do so much better and hope the next one, which will probably be published later this year, is a return to that Halter. And I'll try to pick something better for my next post.

If you want a second-opinion on this book, "JJ" of The Invisible Event, wrote a more nuanced review.
Geplaatst door TomCat on 1/22/2018